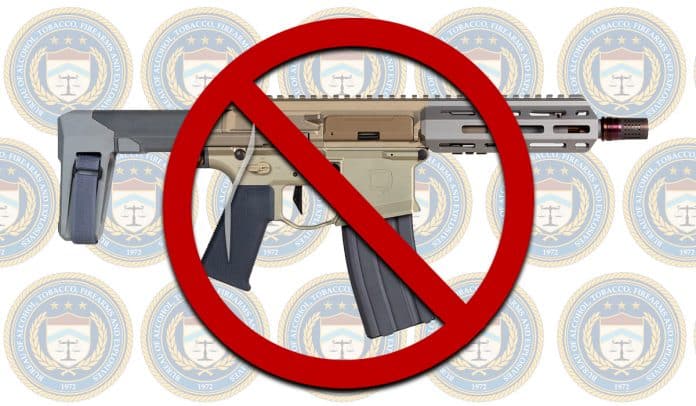 You might be wondering if pistol braces are legal, or if the ATF is going to declare a whole lot of people felons in the wake of this Honey Badger debacle.

Be aware that we aren’t lawyers and this isn’t legal advice. Instead, this is a discussion of publicly-available information.

The truth about pistol braces on AR pistols is that they exist in something of a gray area; they don’t require a tax stamp because of how the ATF interprets a loophole. The BATFE might – might – be gunning for that loophole.

What this portends for the coming months or years…is anyone’s guess.

Sorry, we don’t have more reassuring news for you.

The Honey Badger And Pistol Braces

So, if you aren’t familiar with what happened, we’ll briefly recap.

The Honey Badger is an AR pistol platform manufactured by Q, LLC. It has a 7-inch barrel, is chambered for .300 AAC Blackout, and comes standard with a telescoping pistol brace – not unlike Maxim’s CQB stock, though obviously an arm brace – made for Q by SB Tactical.

Anyhow, Q received a letter from the ATF stating that the gun was clearly meant to be fired from the shoulder as it has a length of pull of more than 13.5 inches with the telescoping stock, and therefore cannot be sold as an AR pistol.

Q is effectively prohibited from selling the Honey Badger as a pistol and was also told to provide samples of other pistols it manufactures – such as the Sugar Weasel and the Fix Pistol – to verify that they aren’t SBR’s.

You can view the letter that Q got from the ATF here as well as the response from Q, LLC’s lawyer, here, telling them how dumb the whole thing is…which it totally is.

Now, without getting into the specifics of the Honey Badger, which has been already covered in-depth elsewhere, let’s talk about pistol braces themselves as that is the relevant issue.

An AR Pistol Vs An SBR

So, what’s the dividing line between an AR pistol, AK pistol (that’s it; I’m Krink shaming) or other pistol and an SBR, a short-barreled rifle?

Per the National Firearms Act, an SBR has the following characteristics:

A “handgun” is defined as a weapon with a “short stock” that is meant to be “held and fired by the use of a single hand.”

The dividing line is that an SBR is designed to be shouldered and a pistol is not. The firing mechanism, the design of the action, the caliber, etc., are immaterial; the crucial defining feature is one is designed to be fired from the shoulder and the other isn’t.

This is also why foregrips are verboten on pistols since it means firing with the use of more than one hand.

Now, where do pistol braces fit into the picture?

Pistol Braces, The ATF, And You

Essentially, braces that are approved by the ATF are perfectly legal until you’re notified otherwise.

Pistol braces on AR pistols were declared in a 2014 ATF ruling to be totally fine. Since a brace was designed as a brace rather than a stock, an AR pistol wasn’t an SBR and therefore…fair game.

In 2015, the BAFTE changed course and said that an AR pistol technically wasn’t an SBR, but shouldering the weapon constituted a “modification” of the design into an SBR and – per the NFA – modifications that convert any pistol into an SBR require the tax stamp or else.

The industry pointed out, correctly, that since their braces are designed to be used as a brace and not a stock, the end-user is the one in control of how the hardware is used; if they use it for a purpose it isn’t intended for, that’s hardly something they can control.

That resulted in the ATF issuing a “Final Ruling” in 2017, in a letter to SB tactical. It reads that “incidental, sporadic or situational ‘use'” of a brace as a shoulder stock didn’t constitute a modification or redesign.

Now, here’s something else you should know:

The industry actually works closely with the ATF to make sure that braces are approved for sale before releasing them.

You can find memorandums from the ATF to various manufacturers about their braces. Here are the ATF letters to SB Tactical, and here for the ATF’s letter concerning Sig Sauer’s pistol brace.

What does the ATF look for?

First, they want to make sure that a brace is actually designed to be a brace rather than a stock masquerading as one.

The overall design is part of it. Read the letter to Sig Sauer, and the agency states that a pistol brace can’t have features commonly associated with a stock, such as the pre-production brace’s texturing on the butt to provide grip.

Another aspect, per this letter from the ATF to Trinity Force is the length of pull or the distance from the middle of the butt of the stock to the trigger face.

The ATF’s Firearms Technology Industry Services Branch or FTISB holds that the standard length of pull on long guns is 13.5 to 14.5 inches, which – as it happens – is about the industry standard LOP on long guns.

If the LOP is 13.5 inches or longer with the brace installed, that’s an indicator that the brace is likely meant to be shouldered since it has the same LOP as a stock.

As it happens, the length of pull is a key component of the ATF’s claim regarding the Honey Badger.

The agency (or rather, the agent) that obtained the sample of the Honey Badger asserted it had a LOP of 13.5 inches with the brace and therefore, was clearly designed to be fired from the shoulder according to that criteria, despite SB Tactical and Q making it clear the HB is a pistol.

Well, THAT was long-winded…what does this mean?

If a brace is clearly designed to be a brace, even IF the end-user does occasionally, trip, fall, hit their head and wake up to find they’ve shouldered the gun and fired it when it wasn’t designed to be used that way…generally the ATF holds that they’re legal. Until or unless they don’t.

Your Brace Is Probably Fine…But Be Prepared

So what does this all mean?

If you’ve built an AR pistol or purchased an AR pistol that uses a brace that has been approved by the ATF, then you’re in the clear until notified otherwise.

Find out who made your brace. Note who you bought it from; WHO MADE IT. See if they have any BATFE documentation by checking their website, or calling them directly.

A good idea is to get out your tape measure. Measure the distance from the exact middle of the trigger to the butt of the brace in as straight a line as possible. If it measures less than 13.5 inches, that keeps it within that ATF guideline.

This tells you whether or not the manufacturer has left themselves open to getting the hammer dropped on them, which they might have.

Now, if the ATF declares an AR pistol that you’ve purchased to be an SBR, you have some options. You can Form 1 the gun, and get the tax stamp so it can be an SBR. It sucks (darn you NFA!!!) but it’s something you can do.

Or, if applicable, you can install a 16-inch barrel and convert it to a rifle.

You may also be able to remove the offending brace and install an ATF-approved model.

What does this mean for the future of AR, AK, PCC’s, PDW’s, and other pistols of this type?

Unfortunately…that is unclear. The ATF could be gearing up for a crackdown on PDWs.

It could also be that Q and the Honey Badger got themselves too famous (careful, Icarus) and they caught the BATFE’s attention by prominent gun tubers shouldering it and flaunting the ATF’s ruling, so the agency decided to teach them a lesson.

Either way, it means that the future of AR pistols/Krinks/PDWs and braces is unclear for the moment.