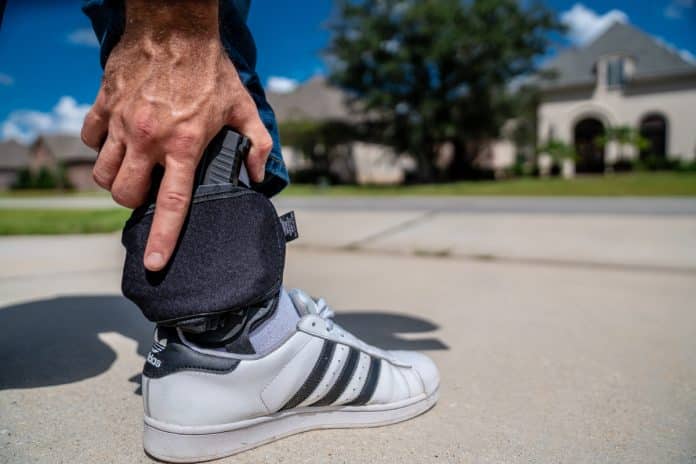 Should you carry a backup concealed handgun in addition to your primary or shouldn’t you?

Many law enforcement officers carry backup guns both while on and off duty, and with many good reasons for doing so like the ones we’ll soon discuss.

But what about for civilians?

Is it really necessary or wise for an ordinary civilian to carry more than one concealed carry handgun at a time?

The short answer to this question is that only you can decide for yourself because, in all objectivity, there are many compelling arguments both for and against it.

3 Arguments FOR Carrying A Backup Gun For EDC

Here are the three most compelling arguments in favor of carrying a backup gun as a part of your EDC:

Your Primary Gun May Malfunction

Probably the number one argument brought up in favor of carrying a backup gun is that it allows you to get back in the fight if your primary firearm has malfunctioned in any way before the fight has ceased.

Granted, you could attempt to fix the malfunction on your own, but it’s almost certainly going to be faster to simply toss the jammed gun away and draw your secondary one to resume shooting.

This scenario has actually saved the lives of countless police officers and civilians in real life defensive scenarios. Either the primary gun malfunctioned or was wrestled or knocked away from them by the assailant, but they drew their backup gun to finish the fight.

Even if your second gun is nothing more than a small pocket gun if anything happens to your primary that little backup could save your life.

Your Primary Gun Could Run Empty

It’s very unlikely that your primary defensive pistol will run out of ammunition in a gunfight because the average number of shots fired in a gunfight is three rounds or less in less than three seconds and within a range of three yards (this is often referred to as the 3-3-3 rule).

Nonetheless, it is possible that your primary gun could run empty, especially if your primary gun already has limited capacity and you’re up against multiple attackers (which is becoming an increasingly large occurrence as criminals decide to work together).

While you could undoubtedly reload your primary firearm, assuming you carry a spare magazine or speed strip, it will almost certainly be faster to perform a ‘New York’ reload instead, or when you toss an empty gun away and draw a second one.

You May Need To Arm Someone Else

By arming another citizen, you have instantly created two ‘good guys with guns’ rather than just one.

For instance, if you’re in a building and you hear shooting coming from another room, you can draw your defensive firearm while lending your second one to someone else you’re with.

Some people will be quick to counter this point by arguing that it’s not always wise to arm another person, particularly if you have no idea who that person is or what their skills with a gun are.

So yes, you will want to exercise caution in regards to who you decide to arm. But if you are with someone who you knows is capable of wielding a gun in self-defense, it will always be to your advantage to have someone else with a gun in addition to yourself.

3 Arguments AGAINST Carrying A Backup Gun For EDC

Here are the three most compelling arguments against carrying a backup gun as part of your EDC:

Carrying a Backup Gun Is Not Convenient

Now granted, the number of concealed carry options and holsters for a backup gun is very diverse. If you carry your primary pistol IWB on your strong side hip, for example, you could carry your backup gun in a pocket holster or in an ankle holster, where it will be mostly out of the way.

But still, there’s no denying that you’ll have to deal with the extra weight and responsibility of that second pistol, no matter where you carry it or how small of a gun it is.

If you have to walk into a place that doesn’t allow guns, such as the post office, that’s two guns you’ll have to strap off and leave in your car (hopefully locked and secured.) It’s two guns you must always be aware of so you make sure that nobody else gets a hold of one in a scuffle. It’s two guns that’s going to be weighing down your pants.

You get the idea.

Packing just one gun is a major responsibility, and it can also be impractical. Carrying two guns? Double for both of those.

And since the chances of you even using a gun in self-defense are very minimal (even though guns are used more often in self-defense than in violent crimes), this argument only becomes more compelling.

This is easily one of the most overlooked reasons not to carry a backup gun.

If you ever are forced to shoot a firearm in self-defense, you’re pretty much going to go to court no matter what even if the shooting was completely legally justified.

Carrying a Backup Gun May Not Even Be Legal

Last but not least, in some jurisdictions, it’s outright not legal to carry a backup gun. For example, in the state of New Mexico, it’s only legal to carry one concealed firearm at a time (which is interesting because otherwise, the gun laws in the state are not very restrictive compared to other states in the Union).

As you can see, there are many good reasons to carry a backup gun as well as many reasons not to.

The only person who can decide if carrying a backup gun is the wise decision is you.

You may very well end up deciding that it’s smart to carry a backup gun in some instances but not smart in others.

For example, if you’ll be walking or driving through a high crime area, carrying a backup gun may be wise. But if you’re just making a quick run into town for groceries, it probably won’t be necessary or desirable.

I carry 2 guns. A Glock 26 somewhere around 2 o’clock in my waist band which I can draw pretty quickly. I also carry a Kimber Ultra .45 in a belly band under my left arm. I am seated a lot and it is easier to get to the Kimber while seated than it is to get to the G26. After watching a video by Massad Ayoob I also carry ear protection in my car behind the passenger seat within reach and have eye protection in the car as well.