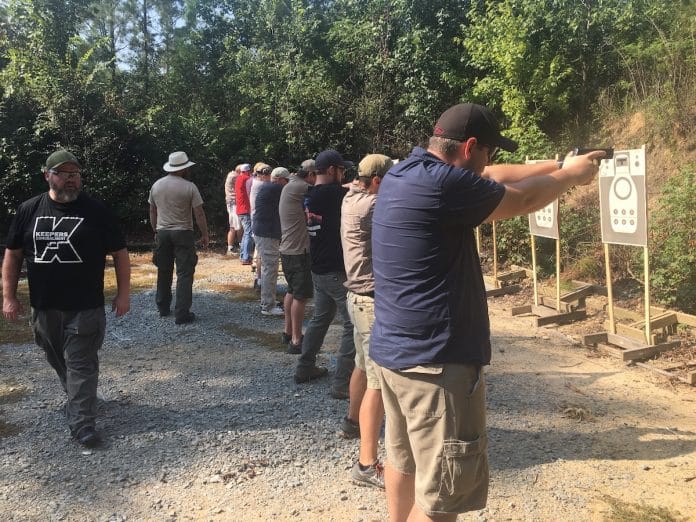 I have been carrying a gun in one capacity or another for over a decade, always in a traditional 3 o’clock or 4 o’clock position, regardless of either Inside the Waist Band (IWB) or Outside the Waist Band (OWB). A few months ago I decided to take the dive into Appendix Inside the Waist Band (AIWB). If you are not familiar with what “appendix” carry, in essence, it is carrying the gun forward of the hips, as opposed to on or behind the hip. Appendix Carry comes with a few advantages, but for me, I was specifically looking for speed.

In the past, I had dabbled for a very short period of time with AIWB, but could never get the concealment or comfort to a workable level. With careful holster selection, and listening to the guys who carry AIWB and know how to do it, I broke the code on the concealment and comfort part, but I still wanted some dedicated AIWB training. I knew that Spencer Keepers of Keepers Concealment/Awareness Defense Training was going to be teaching his AIWB Skills class at a local range, and through a fortunate turn event, I was able to attend.

If you know who Spencer Keepers is, it is likely because you know of his holster company, Keepers Concealment. While Spencer’s direct involvement in the actual holster side of his business is less than it used to be, they still make some of the best thought out AIWB holsters available. Even though Spencer started in the holster making business, his real passion is instructing. His courses are born out of that passion, and that passion is what drives the quality of the class.

Naturally, Spencer being the “AIWB holster guy,” means he teaches an AIWB specific class. The regular AIWB Skills class is a one day format, about half classroom and half on the range. There is also a 2-day Advanced AIWB Skills class available. The goal of the one day class, as I understand it, is to most importantly teach people how to run a gun from AIWB safely. The primary sticking point for many of the detractors of AIWB is that it is not safe. If done incorrectly, this is absolutely correct. It is also true that carrying a gun anywhere on or off our bodies incorrectly is also unsafe. Spencer spends a significant amount of time going over how to handle a gun being carried AIWB safely. In fact, he goes so far as to say that the holstering technique that he teaches in this class is the most critical thing in the class. Safety is teaching point number one, and he reinforces this throughout the class.

The class is split almost evenly between the classroom and the range. Typically, the classroom portion of the class is first, and the range is second. To accommodate the local weather (i.e., the heat) this particular class was a little bit of classroom at the beginning of the day and a little more at the end of the day, with the range sandwiched between the two. The classroom portion kicked off with who is Spencer Keepers and why he is teaching AIWB classes. He then jumps into firearms safety, breaking down the usual four safety rules in his own way, including the practical effect these rules have on gun handling and defensive shooting. This is an important context that not all instructors offer in their classes and shows that the safety rules are not just a formality. These are things that Spencer has spent some time thinking about and developing an understanding of.

To wrap up the first classroom segment, Spencer covered fundamental shooting techniques and ended with the draw stroke and holstering technique that he uses. When holstering, Spencer emphasized the following points, the holstering process should be slow, careful, gentle, and precise. Do those things, and you will minimize the likelihood of making a mistake. Regardless of the position you carry concealed I would say that is a good mantra to follow for holstering a handgun. Spencer also emphasized the need to drop the strong side foot slightly, and bow the hips forward to ensure you holster the handgun without muzzling any parts of the body, and looking at the gun while holstering. Following these steps, holstering the gun in AIWB is arguably safer than holstering the firearm on a less visible part of the body.

On the range, we started with a few repetitions from the holster with unloaded guns. This gave Spencer a chance to see everyone’s gun handling and ensure that the class could execute the draw process and return the gun to the holster safely. Attention to safety and proper gun handling was a big part of this course. Spencer and his assistant instructor were constantly on the move watching how people were executing the different parts of the draw and holstering process, making corrections when needed. Lax gun handling was not tolerated, even a little bit. More than a few minor corrections were made to individual’s application of the technique to ensure safety was maintained.

The live fire part of the class started with 2″ dots at three yards and some cadence drills to get everyone warmed up. Shooting cadence drills on that small of a target, even though the range was short, is a challenge. While we had some less experienced shooters in the class that were able to fight their way through, I think having a base level of skill already established before attending this course would be helpful. There is an incredible amount of information to be processed, add the stress of trying to keep pace with the shooting demands of the class and specific material will likely be missed or forgotten in short order. Spencer doesn’t hold anything back. He expects course attendees to get squared away pretty quickly.

The live fire drills progress quickly into building speed on the draw stroke, learning to manage the gun on the way to full extension, and getting multiple hits on relatively small targets. Most of the work is done from five yards, with a bit at three yards and seven yards. Shooting drills to build speed while maintaining safety is the bulk of the live fire part of the class. Spencer sprinkles in a bit of seasoning with his shooting tests. There are two “tests” that are used to add a little stress to the shooter. These tests are shot individually in front of the class on a timer, and the person to put up the fastest clean run gets a Top Shooter hat. Even though it sounds fundamental, the pressure from having the whole class watching you shoot and the desire to not be entirely outperformed by everyone else can be enough to get people to start driving the gun faster than they are capable of. This was evidenced by the surprisingly few clean runs on either of the tests. It is a valuable lesson learned, manage the anxiety, and stay within your skill level.

There is some more dry fire work towards the end of the range portion of the class that focuses on one-handed manipulations of the handgun, and how to mitigate some of the problems that can create. This is material that is pretty basic in concept, but not in application. It is also not frequently taught, especially in one-day classes. There are not a huge number of reps on those skills, but it is enough to get the basics down. There is also a “crowded table” drill to highlight the benefits of AIWB when working in close proximity to other people. This drill really highlighted the utility of AIWB in crowded situations, and how it can be safer than deploying a handgun from a traditional location on the strong side hip.

Once we wrapped the range and went back into the classroom to dodge some of the heat Spencer got into what he calls “holster theory.” This is essentially the “this is what makes a good holster, and this is what isn’t” part of the class. Spencer, of course, uses some of his own holsters to show examples of different holster features that are beneficial to AIWB carry, but he also speaks highly of, and has several examples of other good holsters for AIWB and uses them too. While not the exciting part of the class, the information in this part of the class is probably some of the most valuable from the class. Most people have no idea what makes a good holster, or why one holster might be better than another. This is the part of the class that you get find that out, and to my knowledge, that information is not available anywhere else.

The class ran from 8:30 am to 5:30 pm, and even though the round count was pretty low at just under 200 rounds, I felt everything was exceptionally well paced, and I never felt like we were moving along too slowly. If someone carries AIWB or is thinking about it, they should take this class. Not for the shooting part, but for the information and understanding how to carry and if needed deploy a gun from AIWB safely. My one exception would be completely new shooters. This is not a good first class for someone. There needs to be some level of experience before jumping into this part of the pool. Just enough experience to know how to handle a gun safely, a decent grasp of shooting fundamentals, and the ability to safely function under a little bit of stress. If someone meets those criteria, they need to be in this class. It is one of the few single day format classes available from the top tier of instructors in the industry, and no one will leave the range unchallenged.