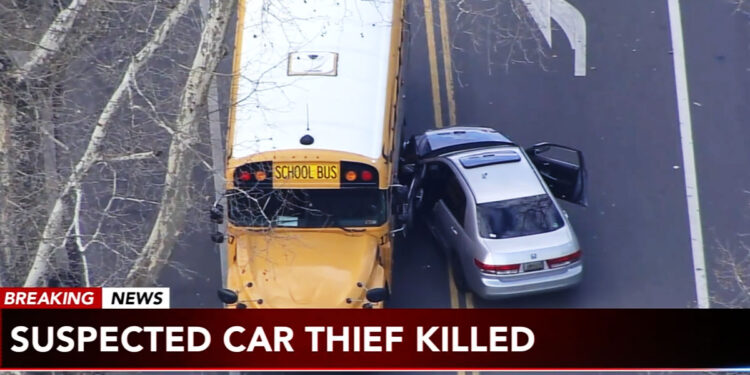 A carjacker is dead after attempting to steal a man’s Acura sedan but is then shot dead by the vehicle’s owner.

A Philadelphia man saw someone attempting to steal his vehicle earlier this morning. The suspect had hooked up yellow tow cables to his vehicle in an attempt to steal it. The homeowner went outside and started firing at the suspect.

The suspect was hit, and the tow cables broke off as he tried to get away but ended up crashing into a special needs school bus. The 52-year-old suspect was rushed to the hospital but died from his injuries. No one was injured on the school bus. Police also believe that the victim does have a valid Pennsylvania Concealed Carry Permit. Police also found a firearm in the suspect’s vehicle.

Thankfully, no one but the suspect was injured during this incident. We can never recommend using a firearm to protect personal property, including your vehicle. No one’s life was in danger, and there’s a chance that the victim could face charges. Knowing that the suspect also had a gun, what if this had turned into a shootout and an innocent bystander had gotten shot? What if some of the children on the bus that the suspect wrecked into were injured? All over a vehicle that would most likely be covered by insurance. Think about these things before you decide to use your gun to protect your personal property. It just isn’t worth it.

It’s a shame that our country has come to the point where the best advice is to let the crooks have what they want unless your life is in danger.