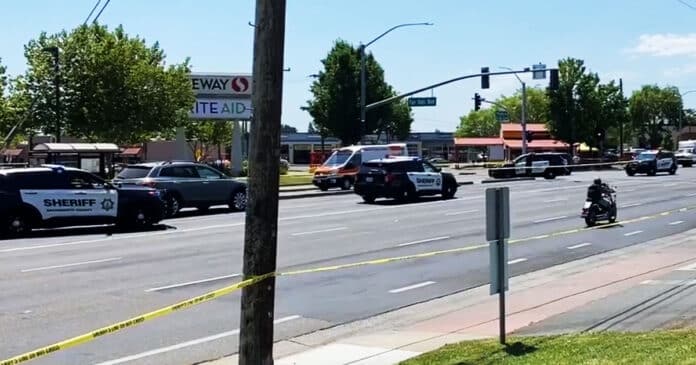 Four victims were involved in a man’s rampage with one of them being killed, and the suspect was eventually shot by another citizen who witnessed the attacks.

Authorities say the suspect struck two of the victims with his pickup truck, one of which was killed, while the other two victims were attacked with the man wielding a crowbar and gun.

The suspect had made his way to a trailer in which the fourth victim engaged in a physical altercation, and it is unknown whether he was struck with the crowbar or gunfire. That is when a person related to this victim exited the trailer with their own gun, shooting the rampaging man in the upper body.

The first victim was struck by the truck and died at the scene. The second was attempting to help the first before being run over. The third was rear-ended and sought refuge in a private security guard’s vehicle where the suspect brandished his weapons. The fourth victim was transported to the hospital along with the second both in unknown condition.

The suspect was also taken to a hospital where authorities say he was “awake and alert.”

This is why society will always need someone outside of law enforcement with the presence of a gun. What else damage and harm could have been done by the suspect had he not been halted in his tracks? Having a gun means to be prepared for the expected and unexpected.

Surely no one that morning thought they would be attacked by a man on a rampage, but evil lurks anytime and anywhere. Plus, it is still unclear for the man’s motives as both parties are not privy to each other, as well as whether or not the rampage was under the influence.