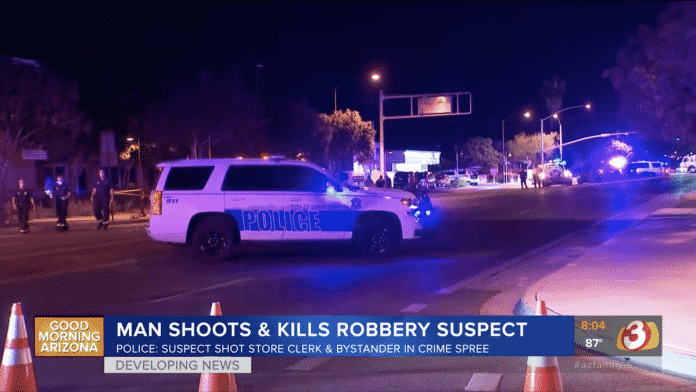 Late Thursday and Friday morning, a man decided to go on a crime spree, robbing three Circle K stores at gunpoint. At each store, he fired shots at the clerks, but none were hit. But an innocent bystander walked into the third store he was robbing, and the suspect shot and killed him.

But what this criminal didn’t know is that another man in the store was armed and exchanged gunfire with the suspect as he was fleeing the store.

Another bystander “engaged the suspect in gunfire” as he left the store. “A gunfight ensued. The suspect was killed at the scene.” VIA AZ FAMILY.

The suspect was shot and killed. The armed citizen was also wounded and is in the hospital in critical condition.

We often talk about drawing from the drop and how that’s rarely a good idea. We don’t know the exact details of this situation. But the armed citizen must have decided he had to do something after seeing another innocent bystander get shot and killed.

While one innocent life was taken, who knows how many more lives this armed citizen saved. This criminal was brazen enough to fire shots in all three stores, including killing one man who simply walked into the store during the robbery. How many more stores would this criminal have hit if he wasn’t stopped in his tracks in the third store?

Stay armed and be prepared.