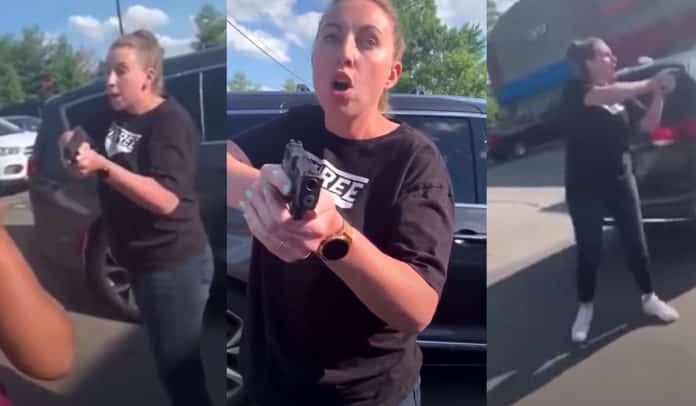 We went over this incident during the last episode of CCX2. The confrontation started after a woman bumped into a woman’s teenage daughter. An argument ensued with the mother demanding the other woman to apologize to her daughter.

Most of the incident was recorded by the daughter and mother and was uploaded to social media. You can watch the video and our commentary in the video below.

The couple both have (or had) concealed carry permits and were both carrying at the time. As you can see from the video, after the mother beat on the back window of the car while the couple was trying to leave, the other woman gets out of the car, racks her pistol and points it at the mother.

We talk about this all the time. You should not be drawing your gun unless you fear for your life or great bodily harm. Does someone beating on the back window warrant drawing your gun, let alone, getting out of the car, and drawing your gun? I don’t think so.

Police interviewed the couple at the scene, held their guns as evidence, and let them go. Well, they have now both been charged with felonious assault. And there’s a good chance they will be losing their concealed carry licenses and possibly the ability to own a gun.

As a concealed carrier, carrying a gun is a huge responsibility. You have to be able to control your emotions and temper. In this case, the couple should have just gotten in their car (and not roll the window down to keep arguing) and left. It is that simple.