by Luke McCoy
in Articles, DGU
1

A Ft. Lauderdale woman received a phone call no parent ever wants to get. Around 6 PM this past Friday, Kari Bookmyer’s teenage daughter called her in a panic. Someone had been knocking on the front door, which she thought was her mother.

Since Bookmyer was still on her way home from work, it was obviously not her. Then she heard glass shatter, which was the back sliding glass door. There were two men trying to break in while her teenage daughter was home alone.

“Your first instinct is to protect your children,” she said. via WSVN.COM

While on the phone with her daughter, Bookmyer called 911 on another phone. +1 for being prepared and having a backup phone. She was also prepared by having a Florida concealed weapon license. She told dispatchers that she was going into her home. They suggested that she wait for the police.

“I went inside, and I had my weapon drawn,” she said. “I told [my daughter] to lock herself back in the bathroom until we knew the house was cleared.”

Fort Lauderdale Police arrived shortly after, and fortunately, there was no one else at home. via WSVN.COM

Thanks to the Ring.com doorbell camera installed near the front door, one of the suspects can clearly be seen. At some point, you can also see both suspects running off in the distance. Unfortunately, the suspects have not been found. 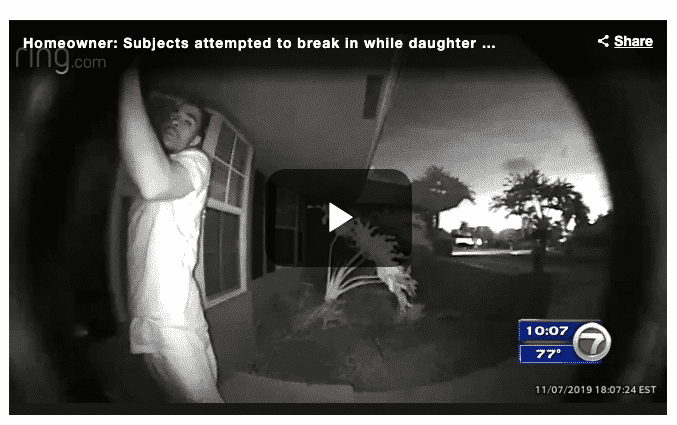 Armed Citizens Firing Warning Shots Again | One May Be Charged