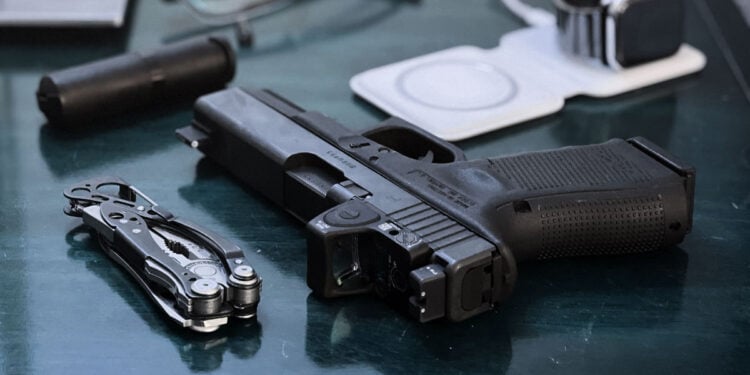 There is a habit that proves the norm among legions of gun owners that poses a consistent safety hazard; naked guns. I am not referring to the classic comedy movies, The Naked Gun, but rather I refer to the practice of many, perhaps most, gun owners who leave their guns naked all too often. A handgun, in particular, belongs in a holster when not being purposefully handled, or in a locked safe, be it a quick access hand safe or a large gun safe. Handguns should not be left naked under pillows, on coffee tables, or in nightstands, or naked when shoved in the waistband. Avoid naked guns.

There is a long legacy, going back many decades, of many people leaving guns lying around. We all know of the grandpa who slept with a 1911 or 357 Magnum revolver under his pillow. We probably all know stories, personal or told to us, of someone’s father or uncle leaving a handgun on the table, hanging from a hook, or any other sort of nonsense. The reality is that accidental firearms injuries and fatalities are far less common compared to years ago. While the media makes a big deal about these accidents, they are actually far less common than they once were now that firearms safety is more widely taught. As part of that enhanced understanding of safety, leaving naked guns laying about is simply not a responsible option.

Another contributing factor towards the phasing out of keeping unholstered handguns laying about is the wide adoption of striker-fired guns. While I oppose leaving any gun out and available, the reality is that administratively handling a double-action revolver is inherently less prone to negligent discharge than handling a striker-fired pistol. Due to the much shorter and lighter trigger pull on a pistol that typically has no manual safety, striker-fired guns should not be carried around and frivolously handled while not in a holster. Likewise, while sleeping with a handgun under the pillow has always been unwise, doing so with a chambered striker-fired gun is more hazardous than doing so with a revolver.

Once moving to striker-fired guns well over a decade ago (I was a devout 1911 man before that) I adopted the practice of always keeping the gun in a holster unless actually working with it for training or administrative purposes. Handling the naked gun to put it in and take it out of the holster, perhaps into a safe or the bedside nightstand, etc…, introduces opportunities for mistakes each and every time the gun is handled.

A good way to reduce the hazards associated with unnecessary handling is to keep a dedicated carry gun always in the holster. This can be accomplished by using a holster with clips or loops that can be easily taken off the belt. For my carry guns, I simply never remove them from the holster unless necessary, and the gun/holster combination gets added to or removed from, the belt as needed throughout the day. The carry gun and holster combination is either on my person or in a hand safe. If you utilize a belly band or Phlster Enigma, then keep the gun holstered and remove the entire apparatus when you want to take the gun off. If you pocket carry, keep the gun in the pocket holster and remove the gun/holster combination from your pocket when you want to take the gun off.

I see people make the mistake of carrying naked striker-fired guns around with them in the house, perhaps to put the gun away somewhere. I have also seen people carry their striker-fired handgun, without a holster, to and from a vehicle. Again, these are bad habits that heighten the likelihood of a negligent discharge. Keep the gun in a holster.

Striker-fired guns escalate the danger of leaving a gun in a compartment of any kind compared to a revolver or auto loader with a manual safety. For example, a gun left in a glove compartment or console of a vehicle, while naked without a holster, is a recipe for disaster. If there are other items in the compartment, then the actuation of the trigger could occur even without human intervention. Also, when reaching for a gun that is freely floating in a compartment such as a vehicle, desk, or nightstand, it is quite easy to mistakenly actuate the trigger during a moment of panic. A striker-fired gun should remain in a holster if it is left in a compartment (I am no fan of leaving guns in compartments anyway, a gun should be on your person or locked in a safe).

If you want to keep an unholstered gun available for home defense then the only safe way to do so is by putting it in a dedicated quick-access hand safe. A safe that is fairly small so that the gun remains in a known position is best as it prevents rummaging around within the compartment, possibly in the dark, to find the grip of the gun. I suggest staging such a gun in a hand safe in a way that, when withdrawn from the safe, the gun won’t be muzzling anything you are not willing to destroy if you do have a negligent discharge when withdrawing it (for example, don’t stage your home defense pistol so that it muzzles your spouse when you withdraw it from the nightstand safe).

Firearm safety is a life commitment, but many who live with guns in their daily life can become complacent about administrative handling. Don’t fall into the trap of complacency. Every time you handle a firearm your head needs to be in the game. A good way to further prevent negligence is to avoid the needless handling of naked guns.

PA Man Gets Into Shootout w. Burglar That Stole 2 of His Guns & Playstation

Road Rager Arrested for Drawing Gun; Blames It On ‘Having a Bad Day’

Road Rager Arrested for Drawing Gun; Blames It On 'Having a Bad Day'