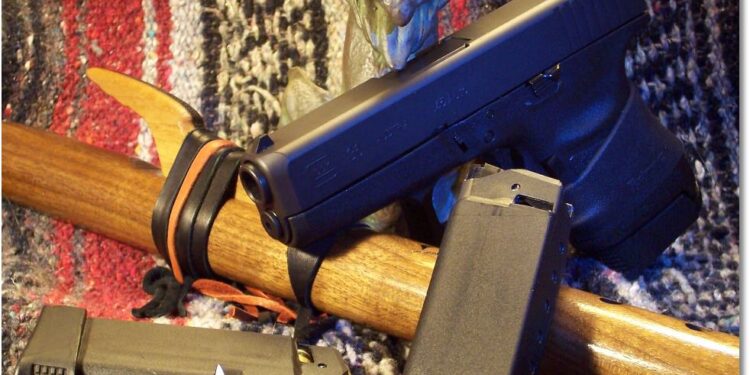 I have three bears in my house: The Glock G21 (Papa Bear), a Glock G30 (Momma Bear), and the Glock G36 (Baby Bear). The G36 has become my EDC, as I have relegated the Bersa 45UC to back up and other duties although I have to admit that I return to the Bersa for EDC on occasions.

When I first fired a G36 at the range, I was impressed. The gun was small and handled a big round. The fact that I had to wrap my pinky finger around the bottom of the magazine base did not bother me although I would have liked some pinky support. Recoil was not unpleasant or disconcerting, although it is certainly not a quick-recovery gun for action-shooting competition. I wondered if I would ever become accurate with the gun. I was in fact, placing a challenge on myself to master this gun and, although I am not there yet, the G36 has proven that it can play with the big boys. I decided that this was a gun for me and purchased it to explore the possibility of carrying it every day.

The first thing that is noticeable is the narrow grip but since the G36 has a factory magazine of six shots, a wide grip is not necessary. The G36 is unique in the Glock .45ACP line-up as, unlike the G26, it cannot use magazines from its bigger counterparts, the G30 and G21. For example, the G30 can use the magazine from the G21. However, the width of the gun is narrower than the G30 and G21 and the short grip adds to the concealment factor when trying to hide it from the view of the general populace. Of course, modifications are always necessary to make a gun personal.

With the exception of adding a Pachmyr Grip Sleeve, an extended slide stop lever, grip plug, and Pierce magazine extensions to my personal “Baby Bear”, the pistol is stock. With the Pachmyr Grip Sleeve, the 1.240-inch grip width fits my hand perfectly. The Pierce magazine extension simply gives my pinky finger a place to rest if I have a desire to do so though normally, I do not use the pinky finger to grip a gun.

I am not going to opine on the fit, finish, and quality of workmanship on the gun, as they are the usual outcome of Glock’s attempt to manufacture a pistol of the highest quality.

The sights are of the standard Glock variety, a front dot sight with an outlined rear sight and are more than adequate for the gun’s purpose – short-range combat work. I may opt for a set of XS 24/7 Express Sights at some point, as they are my favorite type of sight – a simple dot of the eye.

Recently, I wrote an article comparing the Bersa 9UC with the SIG P239, as I have both of these guns. It is only fair then that I write a comparison between the Glock G36 and the Bersa 45UC.

In the world of concealed carry, the grip length and the width of the gun seems to be prominent factors. The Glock 36 is shorter in both areas. The weight difference is substantial with the G36 being the lighter by far.

Both guns are accurate but I will have to give the G36 the nod in this department over the Bersa 45UC.

The first Double-action trigger of the Bersa 45UC is smooth, somewhat heavy, and long compared the short, light, and consistent trigger pull of the G36. Again, the Glock gets the nod in this department.

The G36 is better than the Bersa 45UC in the grip department, in my opinion. With the Bersa 45UC, if you have a fleshy area between the thumb and trigger finger of the shooting hand, and if it gets over the beavertail, you may experience ‘hammer bite’, as I carry the scars of that happening during a fast fire event. Ergo, the Pachmyr grip sleeve that helps to keep my hand in place and from riding up on the grip. The design of the G36 prevents the hand from riding up past the grip area.

Not that it has anything to do with concealed carry, but the finish of the Bersa 45UC leaves a desire for a better finish as compared to the G36. Again, the nod goes to the G36.

The takedown of both weapons for cleaning is a very simple task. First, ensure that both weapons are safe and the magazines removed. Decock the Bersa 45UC if cocked. The Bersa 45UC takes a flip of the disassembly lever to remove the slide from the frame (Note: if the decocking/safety lever is in the ‘Safe’ position, it will fall forward when you remove the slide from the frame). You must first pull the trigger of the G36; move the slide of the G36 slightly rearward, and then the pull down the slide lock from both sides. 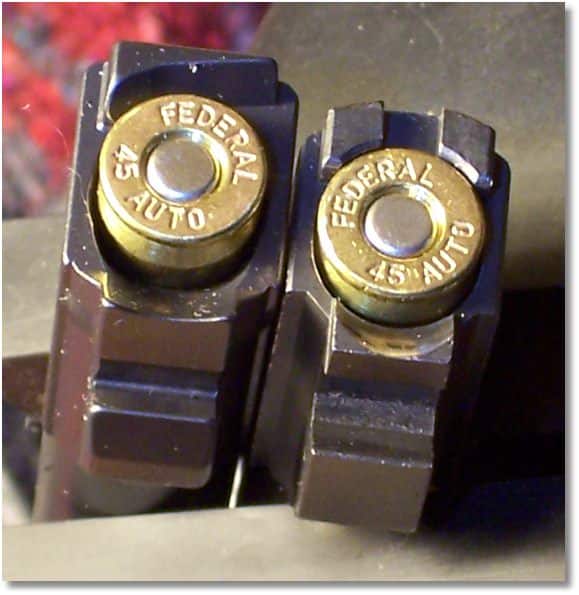 A major difference in the weapons is the barrel. While the Bersa uses a conventionally rifled barrel (hexagonal), the G36 uses octagonal rifling that (claimed) provides a better gas seal in the large caliber .45ACP. Glock advises against using lead projectiles and recommends only semi-jacketed or FMJ ammunition should be fired through their weapons. The Bersa, on the other hand, allows the firing of non-jacketed ammunition. Many agree that if you want to shoot lead bullets and/or reload your ammunition, purchase an after market barrel from Bar-Sto or Lone Wolf.

In addition, one of the major differences between the G36 and the Bersa 45UC is the amount of support at the rim of the cartridge. While the Bersa 45UC’s chamber (right) nearly surrounds the belted rim of the cartridge, the G36 (and all Glock pistols) barrel (left) does not support the cartridge fully at the bottom. Supposedly, this has caused some consternation among those who reload their ammunition. The simple fact of the matter is that most all of the Glock problems today are caused by case failures induced by those who reload their ammunition, and by a very small amount of bad factory ammo, as well as by not maintaining the Glock pistols as originally designed.

For the range session of the G36, three types of ammo were available to me:

I used a standard silhouette target at 7-yards combat distance with a Birchwood Casey Shoot•N•C® Self-Adhesive Target 8″ for each course of fire. I fired a full magazine (6-rounds), two-handed slow fire, at each target.

Loading the Glock G36 does not require assistance from the UpLula loader to get that last round in the magazine. I had changed out the stock magazine base plate for Pierce “0” grip extensions and they do not change the grip length of the gun by all that much, they do make the gun more pleasurable to shoot. I also have not experienced the “Glock Pinch” that some experienced.

Even though I had cleaned and lubricated the pistol before coming to the range, I ran a Bore Snake down the barrel.

Picking a spot about center mass, I unleashed six rounds of Atlanta Arms and Ammo 230-grain TCJ range loads and the results provided an indication of the combat accuracy of the pistol, as all were within a 4-inch group.

The American Eagle brand 230-grain FMJ gave a good representation with all shots landing within the diamond.

While not a substantial test consisting of hundreds of rounds fired, the results are indicative of the accuracy of the Glock G36 at “combat” distance. I would say that the ammunition is close enough for close quarters work.

The G36 is a joy to carry in a Galco King Tuck holster that, incidentally, also fits the G17, G19, and G26 among other Glock pistols that I do not have). The G36 has been my constant companion for several months now and I have not regretted its purchase or performance. In fact, I have been several times tempted to purchase the Glock Repair Kit – a second G36.

If you are looking for a compact carry that can spit .452″ diameter ammunition downrange quite well, and you like the Glock pistol, the G36 would not be a waste of time in considering what weapon to use for your EDC.

The G36 is a joy to carry in a Galco King Tuck holster that, incidentally, also fits the G17, G19, and G26 among other Glock pistols that I do not have). The G36 has been my constant companion for several months now and I have not regretted its purchase or performance

Daryl Dempsey is an Oath keeper, veteran, ex-law enforcement officer and trainer, and an independent conservative libertarian that believes in the Constitution of the United States. He has over forty years of experience as a Technical Writer and Training Program Developer and has as many years devoted to the keeping and bearing of arms.