Buttons and Levers: Understanding the Basics of Shotgun Manipulation

Word on the street is that buying a home defense-oriented shotgun these days can be a bit of a hunt. I had to search for a week to find a particular shotgun I was looking for. This tells us that there may be a few new shotgun owners out there. If that is you, welcome to the fold. Shotguns are one of my favorite types of firearms. If you are new to shotguns, this is a good place to start. Let’s go over some basics.

First, the location of the safety. Shotguns generally have a safety in one of three locations. The top, back of the receiver for Mossbergs. It slides forward to fire, and back for safe. The back of the trigger guard for Remington and various clones. This is a simple cross-bolt safety. The front of the trigger guard for Winchester, Beretta, and I am sure some others. Also, a simple cross-bolt safety, just in a different place.

To load tube magazine shotguns is pretty straightforward. For guns with a loading gate, the loading gate is pushed out of the way with the nose of the shell to be loaded. The shell is pushed into the magazine tube with the thumb, usually until you hear a click. Then just load the next one the same way. Rinse and repeat until you can’t get any more shotshells into the gun. Depending on the gun, this could range from just a couple to 7 or 8.

What is an Action Bar Lock?

Next are the various action bar locks (also called action release). These are buttons and levers that unlock the action so that we can open the action (move the bolt to the rear) without pressing the trigger. On semi-auto shotguns, it doesn’t keep the action closed technically, but it will keep a round from feeding onto the lifter if not depressed. On the Mossbergs this lever is at the rear of the trigger guard, on the left side of the gun. Winchester’s use a similar location, although it tends to be a bit lower profile. Remington has theirs at the front of the trigger guard. Semiauto guns are variable. They kind of get put all over the place.

To chamber a round, press the action lock/release (or shell release on semi-autos) and run the action. On a pump-action shotgun this will mean running the pump back and then forward again. Usually, best to perform this action with some force behind it, just to make sure it all works the way it is supposed to. On a semi-auto gun, this will mean grabbing the bolt handle, pulling it all the way to the rear, and letting it go. This should get the gun loaded up and ready to shoot. 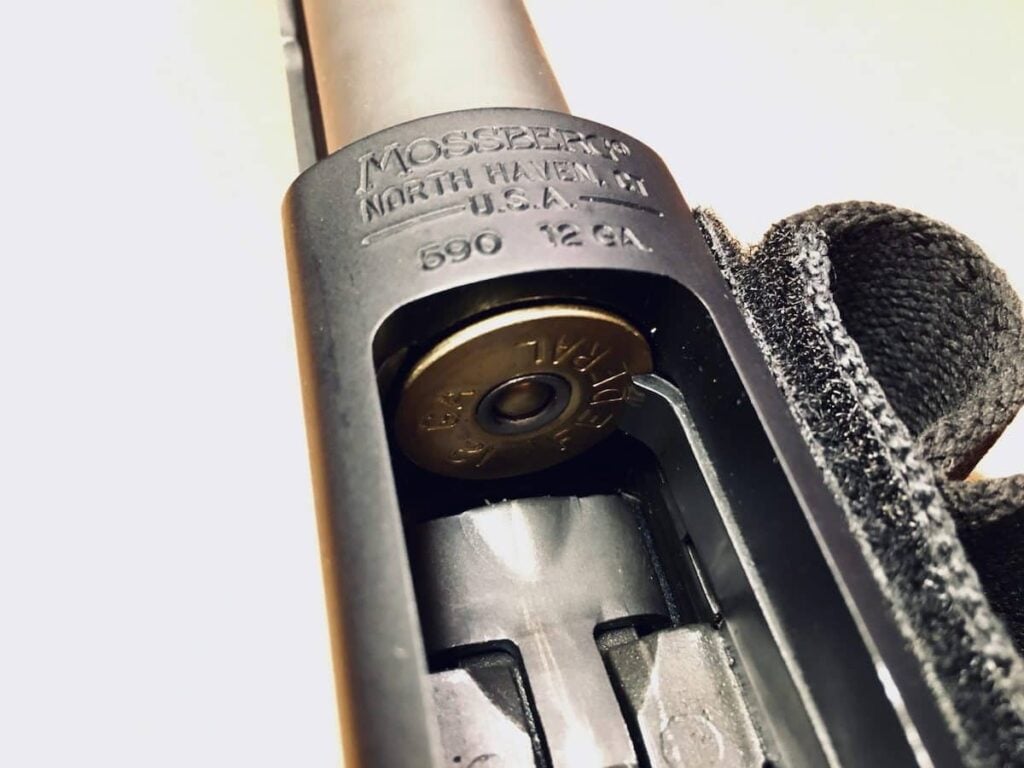 Unloading tube magazine shotguns are a bit more complicated. At least to do it correctly. On Remington 870s, Mossberg 500/590s, and Winchester shotguns we have to gain access to the shell retaining latches. These are the little bits that hold the shell in the magazine tube until it is time to feed another shell onto the lifter. Usually, if you push the lifter out of the way (on guns that have one), you will be able to see the latch holding the shell in place. Press the latch out of the way, and the shotshell should come out of the magazine tube. This keeps us from having to cycle live ammunition through the part of the gun that actually shoots and gives us a little margin of safety.

If you are uncomfortable and not sure what to do, seek instruction from a qualified instructor. As much as I would like it to be, reading an article on the internet or watching a couple YouTube videos is not a substitute for good in person instruction. Finding a good instructor for shotguns though can sometimes be a challenge. If you can, find an instructor that has a Rangemaster Shotgun Instructor certification. Barring that, look for someone who has training from some of the big names in defensive shotgun, like Rob Haught, Thunder Range, Gunsite, or Steve Fisher. If you need help finding an instructor, hit me in the comments and I will track one down for you that is local to your area.