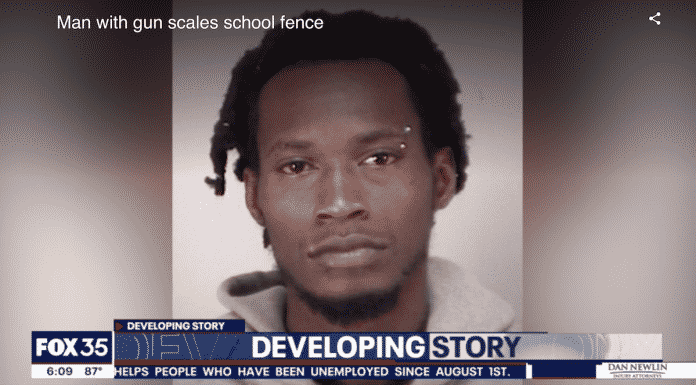 The Lake County School district spokesperson confirmed that a school “guardian” witnessed a man jump a fence to gain entry onto the school campus last Thursday morning. That guardian then called for a school resource officer who then arrested the suspect.

According to the report, the suspect was found with a modified flare gun and had cocaine on his person. The report said that there was a .410 shot shell in the chamber of the flare gun. He also had one 12 gauge shotgun slug, nine rounds of .380, one 9mm round, one .223 cartridge, and an additional unidentified shot shell with him.

There were no injuries. Nothing was fired.

I know almost nothing about flare guns, but some quick research shows that unless you have a WWII version, they all seem to be made of plastic. They do fire a 12 gauge sized flare, but firing a real 12 gauge slug in one would very likely do nothing more than blow up in your hand. I did find some references to steel inserts that supposedly can be used to fire actual shot shells and other types of rounds. Still, I suspect that these would be difficult to locate and also be of limited effectiveness.

The arrest report did say that the .410 shell was “ready to fire,” but it did not say how that was accomplished. The type and brand of the flare gun were not stated.

Given the odd collection of ammo this man had with him, I seriously doubt that he had any idea at all about what he was doing. Read what you want into the cocaine possession. The suspect said that he was simply cutting through the campus as a shortcut to get home. He does live in the area.

I think the real story here is that someone saw something suspicious and didn’t hesitate to act. Too often, people see something that looks like it could be trouble but don’t want to “overreact” and then wait too long to remove the ambiguity and then find themselves in a dangerous situation. Of course, there is such a thing as overreacting to something, but in the case of a potential mass shooter, the most important thing they need to achieve their goal is time. The quicker they are confronted with pretty much any level of force, the less damage they can do.

It’s very possible that this guy didn’t really have the ability or intention to hurt anyone, but the school guardian had no way of knowing that when he first saw him jump the fence.

Situational awareness buys us time, and the more time we have, the more options we have to come up with a defensive plan.

This guy is lucky to be in police custody with all ten fingers and his eyesight intact.