The Benefits of Polymer-Framed Pistols 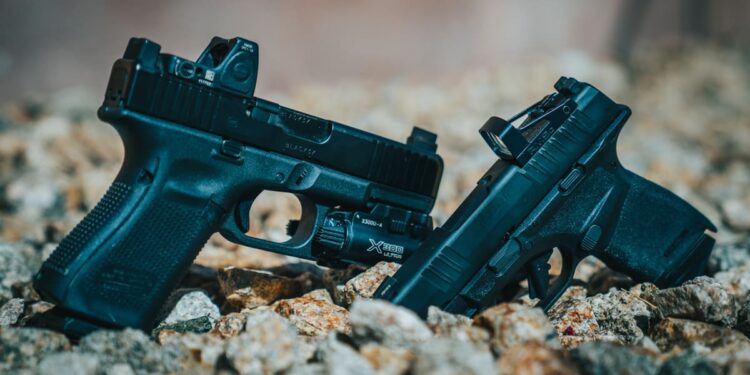 As a younger man, I was a strict devotee to the masterwork of John Moses Browning, and I carried a full-size 1911 Government model for a decade. I was entirely unimpressed with the toy-like feel of the more modern wonder guns made with plastic frames. I was also not amused with their triggers either, coming from a 1911. My Colt that I typically carried weighed 36 ounces unloaded. Hardly a featherweight. By the end of the day, that piece of iron made its presence known. Ten years ago, I finally retired the 1911 from carrying and embraced the plastic. I had mixed feeling about it, but once I settled on that polymer-framed, striker-fired gun, I never looked back.

While I have nothing against carrying all-steel guns, I find that modern polymer pistols offer a lot of advantages. Certainly, if you are a 1911 fan or a Beretta 92 fan, or you like all-steel revolvers, you are walking the world adequately armed. However, pistols like the Glock, the Smith and Wesson M&P, the Sig Sauer P320, and a variety of others, bring certain utility to the individual that carries a gun most of their waking hours. Consider the following:

Sure, if you use a good holster and a good belt, you can carry a heavy gun without much trouble. You may ask, what is the difference between a 20-ounce polymer gun and a 35-ounce all-steel gun anyway? The difference, obviously, is about 75 percent more weight. The extra weight matters when the gun is on the body all day, and a lot of people only realize that after they switch to a lighter gun. Once moving to a pistol that offered twice the round capacity at half the weight, I was hard-pressed to deny that convenience and advantage.

All things being equal, less weight is an advantage. While everyone has a different discomfort tolerance, I certainly find a heavier gun more noticeable. Beyond the comfort aspect, however, is another consideration: the heavier gun will require more clothing structure to support. For a belt worn gun, the difference is mitigated as a good holster, and proper gun belt are a must for proper carry in or on the waistband, regardless of the gun. Where the weight difference becomes more pronounced is in alternate carry methods.

A heavy gun on the ankle, in the pocket, or even in a belly band, will lead to significantly more discomfort throughout the day and can make concealment more difficult. A small, but still heavy, all-steel pocket pistol will weigh down a pocket, whereas an equivalently sized polymer pocket pistol will ride unnoticed. A heavy gun carried on the ankle can actually lead to knee issues, but the modern crop of polymer framed small pistols are ideally suited for this role.

The summer months in my vicinity brings heat and humidity that gives up little to the everglades. As a dedicated concealed carrier, I am wearing a gun at all times unless entering restricted environments. In the summer, my gun is typically pressed up against my body, and by the evening when the pistol final comes off, it is covered with sweat. I have extensively carried all-steel 1911s and all-steel revolvers in this manner. Even with guns made out of stainless steel, I was still always battling rust. Steel-framed handguns usually have removable grips that screw onto the frame. Sweat notoriously gets trapped under grips and causes corrosion. On pistols with polymer frames, this is a non-issue.

Granted, needing to maintain your gun more often may not bother you, but for busy people, it is yet another time suck. I would rather need to wipe down my carry gun with oil once a week rather than once a day. I literally find that to be the difference. The polymer frames of modern guns are impervious to rust, and the tough coatings on the slides of these guns are very resilient. You simply don’t need to battle rust as much with such a pistol as you do if carrying an all-steel blued, or even stainless, gun.

One reason for the emergence of the ever-popular slim pistols chamber in 9mm is the ability to construct guns with very thin frame walls due to polymer. For a number of years, these guns have been essentially “single-stack” autos, meaning that the magazine holds only a single stack of cartridges, thus making the gun thinner than a pistol that takes a double-stack magazine. The truth is, now with guns like the Sig Sauer P365 and the Springfield Hellcat, we have autos that are as small as the established single-stack options but with higher capacity magazines that are, essentially, double-stack. The ability to make the grip thin, yet still inherently strong, is a benefit of modern polymer engineering. This has given birth to the incredibly popular selection of sub-compact handguns that are the current rage for concealed carry.

I certainly have no problem with the notion of carrying an all-steel gun, and choosing to carry one is simply a matter of personal preference. Here, I simply point out some of the advantages of modern polymer pistols for your consideration. If an all-steel gun is your thing and you don’t mind the extra weight and added maintenance, then there are really no other downsides. However, for the average concealed carrier who is not inclined to spend much time maintaining their gun, I think a polymer pistol is an obvious choice.