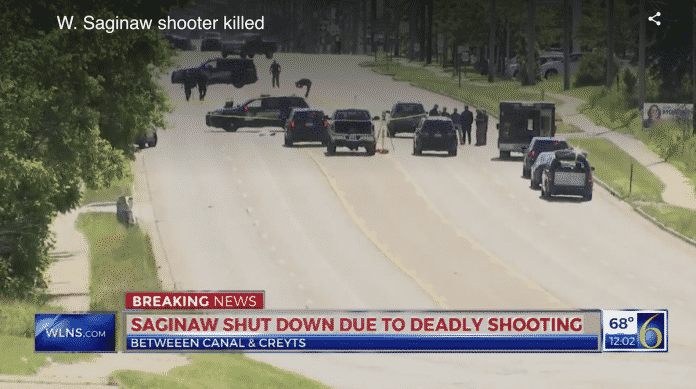 Police in Delta Township, MI, received a call a bit after 8:30 AM this morning about a 26-year-old man walking down a highway shooting a handgun into the air and pointing and possibly shooting at cars as they drove by him.

That all ended when the gunman stepped in front of a 22-year-old man’s vehicle, forcing him to stop. The gunman pointed his handgun at the driver, who then stepped out of his vehicle, drew his own gun, and shot the attacker. He died at the scene. The driver was licensed to carry and is cooperating with investigators.

Police are also asking for additional witnesses and for any drivers that went through the area at the time to check their cars for bullet holes.

Ever left your gun at home because you planned to be in your car and weren’t planning on stopping anywhere “dangerous”? I’ll bet this guy was glad he didn’t do that. This is an example of how we can never know where or when an attack could occur.

Tactically, many trainers would have likely advised the driver to not try to get out of the car with a gun already pointed at him. The few seconds that it takes someone to exit a vehicle leaves them very vulnerable to attack, especially when the attacker already has a gun pointed at them.  On the other hand, shooting through a windshield is something very few concealed carriers have ever trained for and likely something that would be hard to mentally overcome when it’s your personal vehicle.

For reasons we’ll never know, the attacker did not shoot the driver as he was exiting. It is unfortunate the gunman died, but at least he was stopped before he could hurt anyone. Police are investigating, but there is no known motive at this time for his actions.