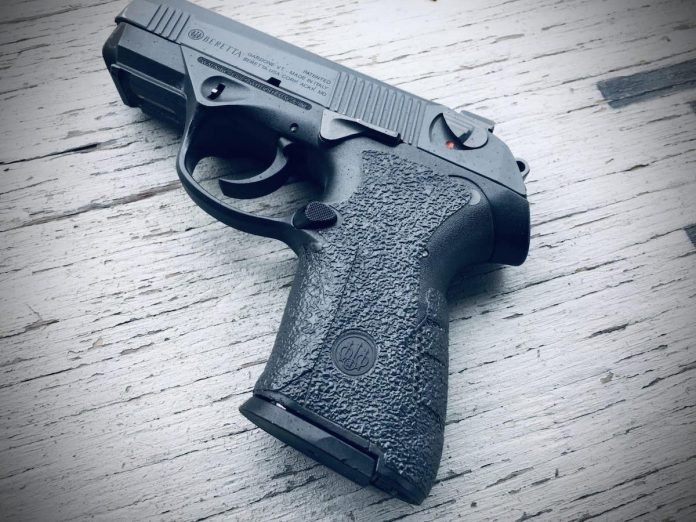 It seems like not that many years ago, the PX4 was the red-headed stepchild of the Beretta lineup. There wasn’t much love. The PX4 had its share of problems. I recall early reports of guns not running too well for more than a couple hundred rounds at a time and having to be beaten with a mallet. They just didn’t seem to do much for people. Or at least, not people who are really serious about shooting guns.

Then came Earnest Langdon. Arguably, he single-handedly made the PX4 a gun to have again. At least it seems that way. Around 2015, Earnest started hitting the internet forums talking about the PX4 Compact being his new Glock 19. Not long after, the PX4 Compact Carry became a thing. It was Earnests’ idea of what the PX4 should be. The rest is history.

The Compact Carry comes from Beretta basically set up to run out of the box:

It has the usual PX4 backstrap options as well. Oh, and of course, a new color to help differentiate it from the run of the mill PX4 Compacts.

Of course, this all comes at a cost. The PX4 Compact Carry will run about $800 on the street (or internet if that is more your flavor). A standard PX4 can be had for just under $500. Is there enough a difference in the Compact Carry to make it worth the extra $300?

How does the PX4 Compact Carry run?

I found the Compact Carry to be a splendid shooter. It does have a preference for being run a bit wet. At least wetter than I typically run a gun. It is not unheard of for me to oil a gun once every few thousand rounds. Depending on how much I am shooting at the time, that could be a couple of months or six months. The PX4 wasn’t really a fan of that habit. Although, I think that is more about the PX4 than the Compact Carry specifically. The rotating barrel just likes a little more lube than its more typical semi-auto counterparts.

I am not a huge fan of the Talon grips. I prefer a different type of texture. Without them, though, the PX4 is really too smooth where it doesn’t need to be smooth. While I get the reason for including the Talons, the PX4 really needs a full-on stipple job, or at least the sandpaper style Talons and not the rubberized ones. Really though, stipple is the correct answer to the PX4’s lack of traction. If someone doesn’t want to do that themselves, Boresight Solutions offers a package for the PX4.

I have mixed feelings about the stealth levers. I appreciate their slim profile when running the slide in the normal over hand way. On the other hand, they are more difficult to manipulate. I would rate them better than the factory levers, but they do come with a trade-off. There is a middle option between the normal factory levers and stealth levers that I think are a good option too, the PX4 Carry levers. This is a lot of personal preference, though. As a general rule, the stealth levers are a good upgrade.

The trigger on the Compact Carry with Beretta’s competition trigger is probably the best DA/SA trigger I have run. It is not the lightest, but something about it just makes it all work. Really well. I am sure it is something about some sort of geometry, but it meshed with me better than Sig’s SRT, and CZ’s DA/SA offerings. While a lot of people these days balk at the idea of a DA/SA gun, I did not have any issues with it. That is more than I can say about some other DA/SA guns. Managing the double action trigger was easy, and making the switch to singe action after the first trigger press did not cause any issues.

In shooting the gun, I would put it on par with any other polymer compact sized handgun. Many people report reduced recoil impulse with the PX4 series guns because of the rotating barrel design, but I am not sure I agree with that assessment. Of course, this is all based on individual perception, for the most part. The PX4 does shoot flat, but so do many other guns for me. If there is a difference, it was not significant enough to see an improvement in split times when shooting drills. The accuracy is on par with its peers. I shot the gun against a P250 and Gen 5 Glock 19, and it was able to match both guns with the handful of different ammunition types I used. A good gun, but not a spectacularly great gun in terms of the shooting. What the gun does give us is a DA/SA gun that will hold its own against any of the striker fired fodder out there today. That may not be a big deal to some people, but I think it is notable because the DA/SA system does have some merit on its own. That discussion is for another day, though.

Once Beretta realized that U.S. military contracts eventually run their course, they decided to have the company’s engineers do some innovation.