You might think that, since I own the pistol, this review is going to be highly subjective. After all, why would I dispute my own taste in firearms? I can tell you that a subjective review will not happen, as I am going to tell you every positive point and every not-so-positive point about the gun. Why would I cheat you to make myself look good?

The grip is slightly chunky to some, but you can expect that out of a pistol with a staggered 7-round magazine that provides you with a 7+1`capacity of your favorite .45 acp ammunition. The grip is short and you will like the magazine extension if your little finger hangs off the grip. The gun, when loaded, has a good balanced feel to it and you know that you are holding a handgun of sufficient weight to drop your pants to the ground if you do not have a good belt to support its carry.

An accessory rail is integral with the frame and provides you with a mount for your favorite accessories.

The matte finish of the frame is the gun’s weak spot for me. Apparently, there was a chemical reaction from the chemicals used in the plastic bag to ship the gun and the finish on the slide. This caused “splotching” of the finish. I have seen some bad examples of this on the web and should be something that you are aware of when you inspect the gun before purchase. On mine, the finish was just uneven on the slide. The finish on the frame was adequate but the finish tends to wear quickly, especially at all of the sharp points from rubbing in the holster or for other reasons. I keep a matte cold bluing pen busy painting all of the shiny spots. I keep the gun wiped down with a silicon-treated cloth. The alloy frame keeps the rust away and I have backed off worrying about it. 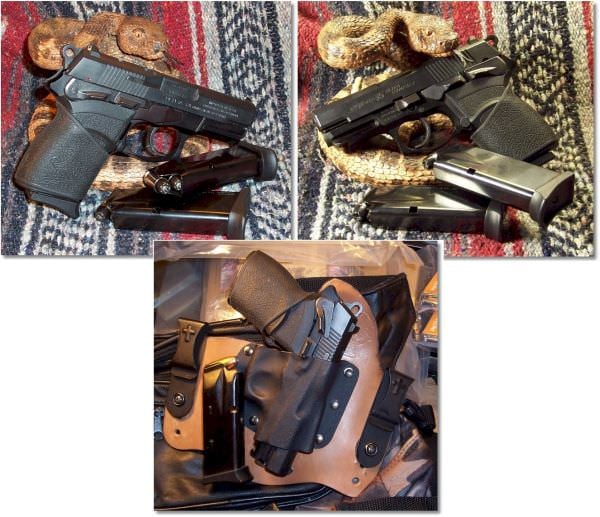 A nicely checkered black polymer grip provides the handhold for the weapon. An indentation provides a rest for your weary thumb and positions the thumb so that operating the controls is within reach (with the exception of the magazine release button). A nicely arched grip helps mate the grip to the shooting hand. If you get the hand too high on the back strap; however, and if you have a fleshy web of the hand, you may experience a hammer bite as I have during fast fire (my shooting hand starting riding up on the grip). For that reason, I added a grip sleeve to help hold my hand in its rightful place on the gun. The grip sleeve adds a little extra dimension to the grip but it helps me maintain a constant grip when my hands are sweating or cold (the polymer grip manages to slip in my hand at times).

The grip removes from the gun as a unit. A single screw, located at the bottom of the grip, holds the unit in place. Removing the grip assemblies requires a word of caution. To remove the grip assembly, press the retaining screw inward with a small screwdriver and then rotate the screw 45 degrees counter-clockwise. You can then slide the grip assembly easily from the frame. The screw does not screw out in the normal fashion, and attempting to do so may damage the screw.

A “Combat Enhanced” serrated hammer allows for easy cocking or decocking of the gun manually and which help to keep the gun from snagging on clothing. (I prefer manually decocking the gun, as it gives me more control of the process.)

Controls, with the exception of the takedown lever, are ambidextrous and lay out nicely with the slide lock lever before the decocking/safety lever. The operating surfaces of the controls are wide and provide for a good thumb hold when needed.

Magazines are metal and incorporate a friction-free magazine follower. A polymer, magazine base provides support for the pinky. The magazine requires no assistant to load (for example, an upLula loader) and the seven-round magazine loads easily.

The steel slide assembly’s matte finish has been a sore point with many and with me as well. Because of the cost of the gun, I really did not expect a top-of-the-line finish and I was not disappointed. The finish is proprietary; however, and is not just a surface finish; it is part of the metal and not just bonded. As the sides of my 45UC were splotchy in places, I started rubbing with some Flitz just to see if I could help the finish a little and ended using a Scotchbrite pad on the sides of the frame and a sanding block for highlights only. It is starting to look a little on the dark pewter side. It actually is adding a little character to the gun, a patina if you will, and I may continue with my effort. There are no signs of rust, whatsoever. The costs of refinishing would be greater than what the gun is worth and would not add value to it – except for appearance. Occasional wipe-downs with a silicon-treated cloth help matters.

The sights are typical style sights: a front dot and a rear outline. The sights are fairly large and easy to pick up and align. The front sight is fixed and the rear sight is drift-adjustable for windage. The front dot on my gun is wearing and I may put a dab of fluorescent red on it to brighten the sight picture.

Chambering a round raises a loaded chamber indicator above the slide. The indicator is tactile but unobtrusive.

The Thunder 45UC features an improved Browning Petter barrel locking system that provides reliable feeding and ejection. The external extractor grabs the fired casing from the chamber and a fine job it does. The chamber supports the case very well with little being unsupported. With a magazine inserted, the rounds align with the chamber at the topmost portion of the feed ramp to ensure positive chambering. The chamber faces downward, when not in battery, to assist in the feeding process. As the slide moves forward into battery, the barrel is firmly locked into place. Out of 600 + rounds (so far) through the gun, I have not experienced any FTFs using factory ammunition.

A dual-recoil spring assembly helps the recoil and returns the slide to battery in good order.

The slide guide is full rail with a full-length recoil rod to help in the accuracy department. Slide play is minimal and the barrel locks up with very little play. However, the gun does rattle slightly when in battery.

Although I have fired this gun previously with several different types of ammunition without failure, I chose some ammunition that I have not fired through the gun for testing purposes.

My primary carry ammunition for this gun, because of the short barrel, is 45 AUTO JHP 185 GR HYDRA SHOK by Federal followed by two magazines of 185 Grain Hornady HP/XTP.  I also have two magazines of 230 GrainWinchester Supreme Elite BondedPDX1 at the ready, if needed.

As my usual, the target was set at 7 yards.

The course of fire for the day was that the first shot is double-action with subsequent shots single-action, unsupported, two-handed and slow fire. Additionally, since I have shot this gun many times, I had a reasonable expectation of what it would do, but with ammunition that I had never shot through this gun before, there is always that element of surprise. The target chosen for this test was the Official IDPA Practice Target by National Target.

I placed ‘Shoot-N-C’ targets in the head, chest, and abdomen areas for each round of fire.

Placing the sights on the center of the top target, I shot the first shot double-action and two more single-action for placement with the Atlanta Arms 230 grain TCJ (Range Ammo) and hit high on the first (double-action) shot. Reloading the magazine, I began to bring the sights down and 11 shots later, I was able to garner a reasonable shot group with the sights at the bottom of the center diamond. (Note: The hole at right is the hole made by the target holder). All shot were isolated to the head (although the utmost top shot was really close to not being on target – it was the first shot for sighting in)

If you push the loaded magazine hard into the magazine well with purpose, the slide will go into battery and chamber the round. Apparently, this is by design and is a great help during combat reloads, as it removes the step of releasing the slide either by using the offhand to pull the slide to the rear and release or by pressing the slide release lever.

The last course of fire went to the Georgia Arms 185 grain JHP and the lower (abdomen) ‘Shoot-N-C’ target. Since I was shooting the same weight of round as the second round of fire, I held the sight picture at 6 o’clock with the dots on the bottom of the center diamond. The Georgia Arms 185 grain JHP gave me an acceptable group, as shown in the far right picture. The BG would have had some serious bladder control issues.

As my primary carry ammunition for this gun is the 45 AUTO JHP 185 GR HYDRA SHOK by Federal, I can pretty well guarantee that the results are similar to the Georgia Arms 185 grain JHP ammunition that I also sometimes carry and practice with.

This gun prefers the 185 grain to the 230 gain round. It recoils straight back into the hand and ejected casings nicely up and to the right. It is quick to get back on target and the gun is capable of fast follow up shots.

The gun functioned very well with no issues like FTFs or FTEs. I find the gun to be a natural pointer for me and have fired it one-hand instinctive shooting. I have had some good results using this method – not fantastic, but well enough to be generally acceptable.

There was no hammer bite this session, as the Hogue slip-on grip really helped to keep my shooting hand in place.

The Thunder 45UC is accurate, reliable, and durable and is an excellent choice for anyone needing a tough, compact sidearm at a reasonable price. If you like external controls, the Bersa 45UC has them, well placed, mostly ambidextrous, and they work very well.

Aside from an occasional hammer bite (my fault), and which I still carry the scars, the Versa 45UC (or the Bersa 45UC Pro) will serve you well. (I am going to try to make a “beavertail extension” from Kydex to help prevent my hand from riding up too far on the back strap.)

Although the UC means “Ultra Compact”, the big hole in the barrel says it means serious business.