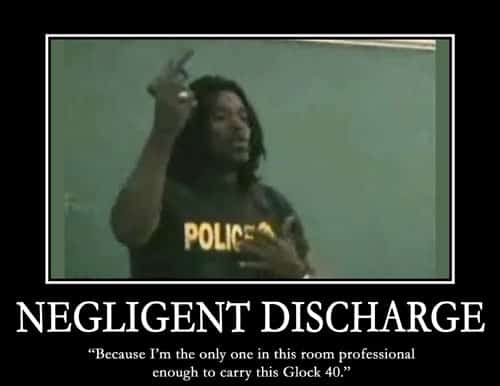 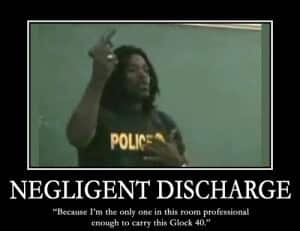 The video is now legendary, gaining millions of hits and becoming viral almost as soon as it hit the Internet.

The unfortunate actor in this almost tragic comedy is a federal DEA agent in a classroom full of parents, teachers, and children.   Uttering the now infamous words “… I’m the only one in this room professional enough that I know of to carry the Glock 40, I’m the only…” (gunshot rings out), the agent has secured his place in history.

Case in point: I was recently at a federal range helping with some qualification shoots. While I hadn’t been around this particular facility before, I knew some of the instructors and I was familiar with the course of fire. At the end of the rifle course of fire, I heard the command from the center line “…once you have ejected that empty magazine ensure that the bolt is to the rear, visually and physically inspect the chamber to make sure that you are clear and then get a buddy check.”

Really? To what end?

Do buddy checks help? Decide for yourself. Rewind that YouTube video of the DEA agent and watch closely.

Approximately 24 seconds before the shot heard around YouTube, the agent says “…and see this is an unloaded gun (unintelligible words)” as he walks toward his “buddy” clearing his handgun.

What exactly was the agent doing? Well, he was conducting a “buddy check” exactly as he had been trained to.

I know that some people will now say “Hold on there Ron, he didn’t conduct the buddy check ‘exactly’ the way he had been trained.” And while you would be right technically, you would be wrong in the long run.

Because a buddy check introduces what is called a “moral hazard” into the situation.

A moral hazard is an economic term, which applies across a broad spectrum of human behavior, and is simply defined as: a lack of incentive to guard against risk where one is protected from its consequences.

The firearms handling field is no exception, because moral hazards apply equally well to firearms related endeavors, here is why:

What are we as instructors teaching the shooter when we tell him that he must conduct a buddy check?

Well, we are teaching him several things:

I could go on, but you get the idea here.

So the question naturally arises: In the DEA shot in the foot/foot in mouth video – who was responsible for the agents Negligent Discharge (ND)? Was it:

If it’s the agent’s fault, why even go through the motions of a buddy check? Why not put full responsibility on the owner/shooter and leave the buddy out of it?

If it’s the buddy’s fault, why not cut out the other “untrained” middleman and only allow the student to show clear to an instructor? Or even better, with the states’ logic, perhaps we should add one more step on top of the buddy check, and add the third step of a “buddy and instructor check”?

The truth behind the matter is that with this “buddy check” you are both deluding the key ingredient needed for individual liberty (personal responsibility) while at the same time you are making the statist attempt to spread the liability to everyone and yet no-one specifically in order to avoid individual responsibility while spreading liability away from the training section and administration.

Therefore the trainers and administration are transferring the potential incident from the relative safety of the range (where all of our watchful eyes and safety equipment are) to the real world where the operator is expected to act on his own.

I am obviously opposed to this sort of silliness, yet I still see it all the time, and nothing seems to be able to kill this collectivist, group think stupidity.

Albert Einstein once said, “The definition of insanity is doing the same thing over and over again and expecting different results.”

We KNOW for a FACT that buddy checks don’t work, we have video proof. Furthermore, buddy checks can’t work, because they run contrary to human nature. So why on earth is this stuff still taught and used?

Because the courts allow it, and because people in training who should know better, allow it.

I understand that the agent sued his department over the release of the video, a bad call in my opinion, because if I knew his lawyer I would recommend that they look into how many civilian schools teach this backwards technique and then look into the terms “deliberate indifference” and “vicarious liability” and run the facts by a modern jury.

While his client may never work in law enforcement again, he could deal with such a minor inconvenience while sipping mixed drinks in the Bahamas collecting DBA as spending his settlement on cheap hookers, booze, and whatever else helps ease the pain of national embarrassment.

For those readers who are fortunate enough to be unfamiliar with a buddy check, it is a process where the owner/shooter of the firearm shows his firearm to a nearby “buddy” in order to “check” the firearm to ensure that said firearm is clear and unloaded. This is a method that we highly advise against using for the aforementioned reasons.