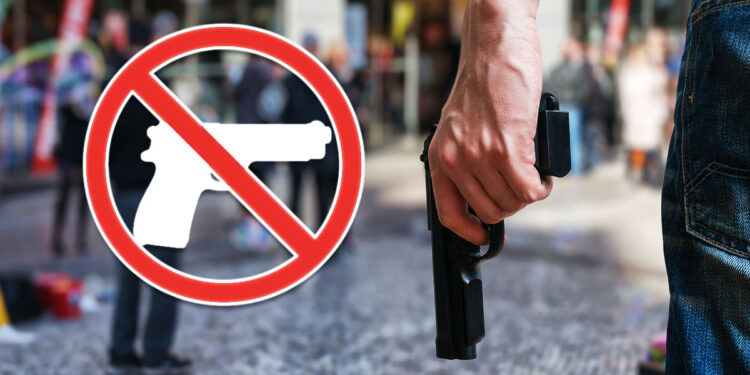 Anyone who thinks gun-free zones work needs to read the manifesto from the shooter in Buffalo, New York, from last weekend. He concluded the safest place for him to carry out his carnage was a place with no guns.

As part of his “strategy for success,” he wrote, “Attacking in a weapon-restricted area may decrease the chance of civilian backlash. Schools, courts, or areas where CCW are outlawed or prohibited may be good areas of attack. Areas where CCW permits are low may also fit in this category. Areas with strict gun laws are also great places of attack.”

You can hear the gentlemen taking the video of the shooter’s arrest saying, “there ain’t nothing you can do.” Actually, there is something you can do: arm yourself and get training.

Back in 2019, a gunman opened fire at a festival in California by cutting through the fence to bypass the metal detectors. Even with the tight security, he still killed three people and wounded 15 more.

At an El Paso Walmart again in 2019, a gunman shot and killed 23 people. In his manifesto, he advised anyone thinking about shooting a place up to pick spots with no resistance, “Remember: it is not cowardly to pick low hanging fruit. AKA Don’t attack heavily guarded areas to fulfill your super soldier COD fantasy. Attack low security targets. Even though you might out gun a security guard or police man, they likely beat you in armor, training and numbers. Do not throw away your life on an unnecessarily dangerous target. If a target seems too hot, live to fight another day.”

That same year, Texas passed legislation, making it easier for law-abiding citizens to protect themselves in more areas. One of the new laws prohibited landlords from putting any type of a no firearms clause into a lease.

From Texas State Representative Dennis Paul, “Some residential landlords have been skirting the intent of the law by placing what are known as “30.06 signs” at the entrances of their apartment or condominium complexes. A sign, which is a reference to the Texas Penal Code, prohibits the carrying of handguns. The use of these signs in this manner effectively criminalizes an apartment renter carrying their handgun from their car to their home. Whether you own or rent, no law should deny a person the right to self-defense in their home. That’s why I authored and passed into law House Bill 302, which will close this loophole in state law.”

People are already screaming about the need for more gun regulations when they fail to enforce the tens of thousands of gun laws already on the books.

I have read the manifestos of these shooters, and they clearly chose the locations they did because they were the path of least resistance. How can anyone truly think a sign that says no guns allowed will stop someone who intends to use a gun to commit a crime? The woke need to wake up the rest of the way and use some common sense.

With All the laws in NYS, NY is pretty much a gun free state. Only cops, criminals and gang members seem to be the only ones allowed to own guns. Like the article said go after safe targets, the path of less resistance. Law abiding citizens are just that, law abiding. Authorities know that gang bangers and other violent criminals will shoot at them. So all you not free states like New York and Commiefornia, make obtaining a CCW for law abiding citizens easier. Law enforcement is probably getting tired of tracing around these bodies with chalk that violent criminals and gang bangers leave laying around.