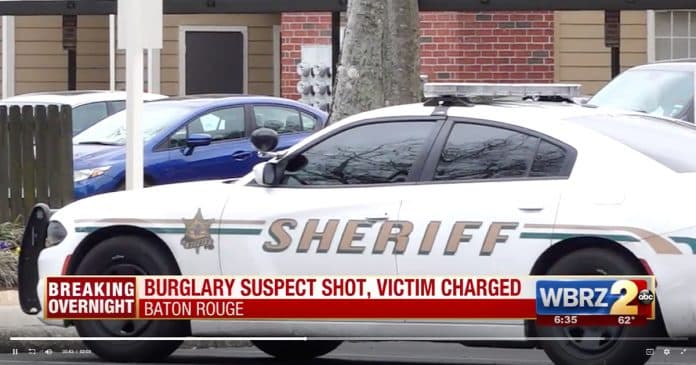 A Baton Rouge man was sleeping in his sister’s apartment when he was awakened by a noise outside the window. Looking out the window, he saw two males in ski masks breaking into his truck. He then picked up his handgun and went outside to confront the burglars.

As he approached them, he thought one of them might have a weapon. He later told police, “(It) could have been a screwdriver or tool” but in the moment he said he thought it was a gun so he fired at one of the two burglars and they both fled.

I’d be surprised if that’s all he faces.

First of all, what’s he doing with $10,000 in his truck outside of an apartment building. That’s not illegal but don’t think that won’t raise some eyebrows at the county attorney’s office. Then, confronting burglars while armed looks a lot like defending property with deadly force. Even if authorities buy his explanation of the screwdriver appearing to be a handgun, his innocence could come into question for confronting the burglar in the first place. Clearly, he didn’t consult with an attorney before giving his statement to the police.

Next, what do you suppose it looks like when you admit to chasing the burglary suspect while armed, forcing him into your truck, and then making him take you where you think he stashed your money? And this before you call 911 to get the kid you just shot medical help. If this kid dies what’s to stop the county from possibly charging this guy with murder for not calling for medical aid?

I can certainly understand his desire to recover his $10,000 but again, what’s that kind of money doing in his truck in a parking lot in the first place. If the prosecutor wants to go after this guy, there isn’t much to stop him from adding more charges.