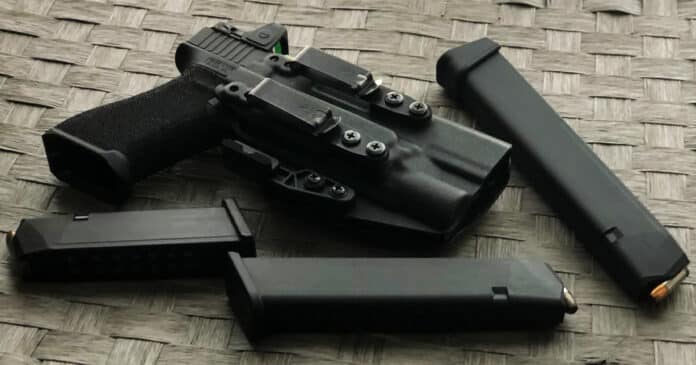 In the long-winded debates filling the far reaches of the internet, firearm selection is a topic that never seems to end. With so many flavors to choose from, it makes sense that everyone cannot agree. At this point, most will agree that the relatively small 9mm caliber is here to stay, and rightfully so. It is one of the most popular calibers for self-defense pistols for the past two decades for civilian self-defense and law enforcement alike. With that being the case, the benefit of a smaller caliber is increased capacity, something the industry has become fixated upon.

Over the last decade, there has been an industry-wide shift towards increased capacity. Everything from subcompacts to full-size duty pistol pistols have seen this trend. Now that smaller firearms with increased round count are marketed towards concealed carry,  individuals may soon be ditching the larger guns. The Sig Sauer P365, with it’s astounding 10+1 capacity, is a prime example that rivals larger firearms in a much more concealable package. The current selection of options is quite amazing when you compare what was available years prior. Pistols that were considered pocket guns and now nearly as capable as their larger counterparts. Who wouldn’t want more ammunition in a smaller footprint? Well, that added capacity may not be what people think it is.

You are accountable for every round fired.

Accountability, the thing that no one wants to talk about. In the civilian self-defense context, you are accountable for every round that exits the barrel if you need to defend yourself. There are no berms, there are no backstops, and there are no second chances. As with most self-defense shootings, you will likely end up in a jury trial. You will then have to reasonably articulate why you fired each round and authenticate the circumstances that lead you to the decision to fire. Increased capacity does not provide the legal ability to shoot more than you must to stop the threat.

There is an overemphasis on shooting high volumes of fire throughout one’s journey into the self-defense realm. This is necessary, but it is often misunderstood. The round counts associated are often taught in the development of shooting skills and not in the development of ending a fight before it begins. Unfortunately, in the training industry, the meat and potatoes of what sells seats is the former. There is a mass misconception that all gunfights will be reminiscent of a scene out of Blackhawk Down, where the concealed carrier is pinned down by machine gun fire. That’s simply not the case for the average self-defense encounter.

Capacity is only part of the equation.

At this point, some may be questioning the need for a larger-capacity firearm. If there is a potential for less rounds to end the fight, what does having extra rounds afford you? The answer is rather simple. More rounds are more rounds, but having more can be detrimental when concealment becomes the primary factor of firearm selection as an armed citizen. The sole purpose of concealment is to carry undetected. If concealment were not a factor, the current trend of higher capacity small firearms would not exist. Compromising concealment for the sake of capacity becomes the issue, so this has led to manufacturers redesigning firearms entirely. What was once six rounds is now ten, ten becomes twelve, and so on. One must ask themselves, at what cost does having more detract from the ability to go undetected. In this case, there are a series of choices to be made.

What is necessary for the mission

It has been stated ad nauseam that the mission drives the gear, but it could not be more true. Your mission, or rather the environment you will be in, should dictate the firearm and equipment selection. What is acceptable in baggy clothing may not be viable in formal attire. What is practical in casual clothing may be detrimental to concealment in board shorts at the beach. Carrying a lightweight J-Frame inside the waistband may not be optimal with heavy winter clothing, but it becomes more viable when deep concealment is the only option. For example, weddings often dictate formal attire, which presents many challenges for a concealed carrier. Suddenly, what was less optimal, now becomes the best solution. We must also take a risk assessment into account. Is the risk of being made high? Will there be consequences for a bystander noticing you have a firearm because of a larger capacity firearm printing? How will that affect yourself and others around you?

There are some risks versus rewards to be understood. The individual concealed carrier must make an informed decision as to what is ideal for the given environment. Simply because you can, doesn’t necessarily mean you should. Capacity becomes overshadowed by the potential risks of the environment, challenges brought about by attire, and the practicality of maintaining concealment. Reduced capacity being less capable is a fallacy. Capacity should be a byproduct of firearm selection based on the aforementioned factors and nothing more.

Minimum ammunition capacity should be ten rounds or higher (which eliminates 99% of revolvers.) If you have trouble concealing that in shorts or a bathing suit, that’s your problem. No one ever left a gunfight complaining they had too much ammo.

My go-to carry guns are a Charter Arms Bulldog in 45 Colt, 5 rounds, a Bersa Thunder 380, 7 rounds, and an LCP2 7 rounds. I don’t feel underpinned with any of them, as all are easy to shoot and accurate out beyond the range where I want to be justifying a shooting. I also don’t feel the need to carry enough firepower to take on half of Al Quada in a single pitched battle. I will leave that for those that are tactics-cool, lol….