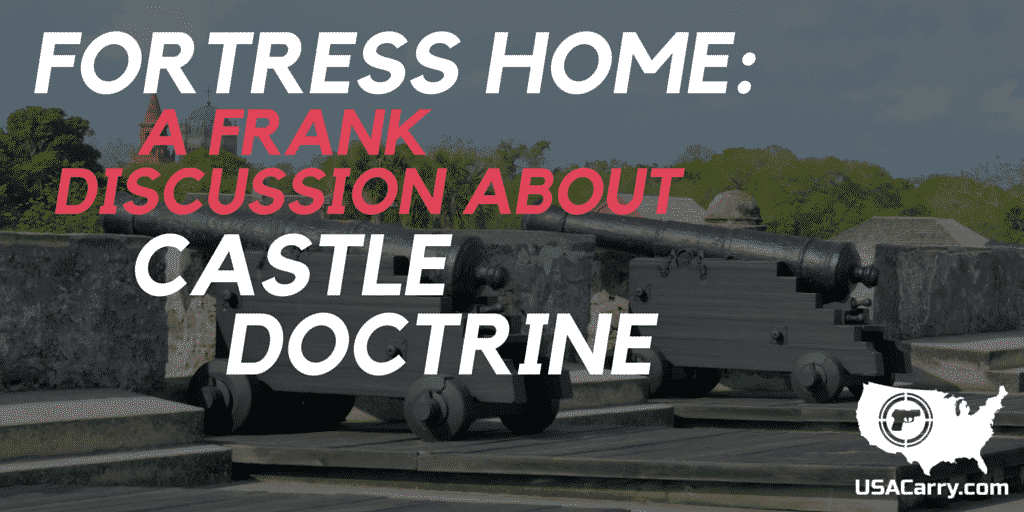 I’m going to open this article with a statement that is beyond contention: I am not an attorney. I am not licensed as an attorney in any state in the Union. I can not receive fees for giving legal advice. Nothing I write or say should be construed as such advice?

Let’s talk about Castle Doctrine, one of the more contentious and misunderstood collections of law out there. Definitions and particulars vary from state to state, but New Jersey statute defines it thus: “The ‘Castle Doctrine’ is a long-standing American legal concept arising from English Common Law that provides one’s abode is a special area in which one enjoys certain protections and immunities that one is not obligated to retreat before defending oneself from attack, and that one may do so without fear of prosecution.” This is a good general definition, and in layman’s terms says that you have the right to expect security in  your own home, no duty to retreat from a threat there, the right to protect yourself with force, and without fear of prosecution.

Now, again, the particulars vary. In some states Castle Doctrine applies to your domicile, in others your car and/or place of business.  Let’s take Texas as a case in point. Castle Doctrine in Texas applies to any unlawful threat or entry to a person’s home, vehicle, or place of business, or an attempt to remove an individual from any of the above. This is a fairly broad definition—not surprising for Texas—and one which explicitly allows for deadly force in those situations. Continuing across the spectrum we reach California, which allows one to protect one’s home and only one’s home with deadly force if they feel that someone is in physical danger. Note that businesses and vehicles are not included.  On perhaps the far end lies the Empire State; New York law only allows for deadly force in the home if you cannot deter the altercation by retreating, and if you were not the initial aggressor in said confrontation.

So what have we learned? Castle Doctrine law is a house of many mansions, with a wide variety of meanings and interpretations from state to state. Coupled with the varying regulations of firearms, magazines, and ammunition, gun owners concerned about self defense law may find themselves a bit bewildered.

Fortunately, there are resources available to help you make sense of things.  First of all, as I’ve discussed in part in another article, you should consider talking to an attorney. Not a friend who happens to be a lawyer, or your neighborhood cop, an attorney who has been paid to act on your behalf. Even if you just book a consult to get some advice and clarification, it’s money well spent.

Secondly, make use of online resources. There are some great places to find state by state firearm information. While these are not a substitute for formal legal advice, they can give you a better idea of what’s going on nationwide.

When you take up a firearm for self defense, you assume a heavy responsibility. Part of that is the obligation to stay informed and to follow the relevant laws for your area of operation. Not to speak out of turn, but your behavior does impact the entire 2nd Amendment community; bear that in mind as you make your plans.