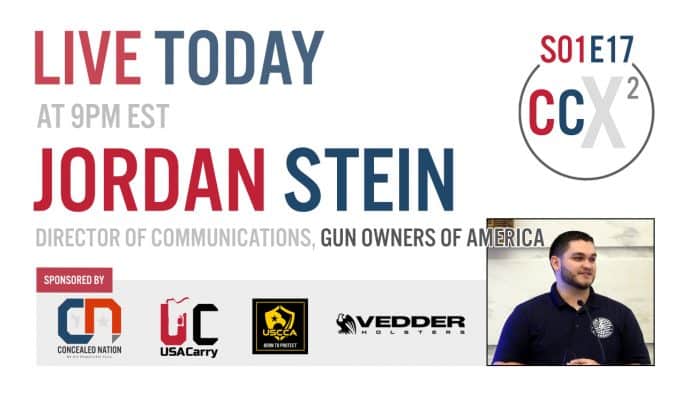 Tonight, we sit down for a live chat with Jordan Stein, who is the Director of Communications for Gun Owners of America.

Jordan Stein is the Director of Communications for Gun Owners of America (GOA), a grassroots organization representing more than two million gun owners and activists. In addition to assisting GOA’s lobbying efforts on Capitol Hill, Stein handles communications, public relations, and social media for GOA as well as serving as a spokesperson for the organization.

Before working for GOA, Stein graduated from Liberty University with a Bachelor of Science degree in Government: Politics and Policy with the Dean’s Leadership Award. During his time at Liberty, Stein founded Students at Liberty for Gun Rights (SL4GR), a club which had over 1,200 members and supporters by the time he graduated. SL4GR was also instrumental in encouraging Liberty’s administration to allow guns in dorms and in building one of the largest gun ranges on the east coast.

Stein has appeared on Fox and Friends, Liz Wheeler’s “Tipping Point” on One American News Network, and has been quoted in The Washington Post, The Washington Times, The Washington  Examiner, TheBlaze and Axios in addition to numerous other appearances in news sources and podcasts. Stein has been a guest columnist for “Down Range with AWR Hawkins” and has been published in American Military News and other commentary outlets.