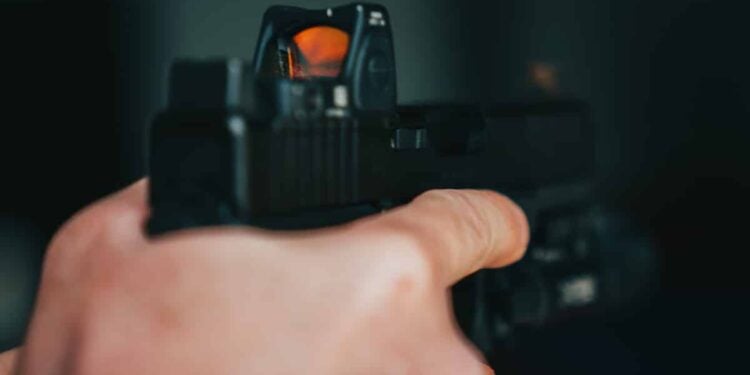 A couple of years ago, you could say, “red dot is the future.” Well, the future is here. More people are adding them, and gun companies are starting to get hip to the idea of including one with the pistol.

Heck, you can pick up a SCCY pistol for less than $400 that INCLUDES THE OPTIC. It’s not the future; it’s the present.

We understand the benefits, as well as the drawbacks (fragility, expense, some aren’t great for concealed carry), but let us also think of how to select one for purposes that we intend to use it for.

So, a red dot reticle is a holographic projection of a dot – usually red, but sometimes green – to a fixed point in the focal plane, much like the reticle of a scope is etched into the lens of a scope. The dot is fixed in parallel with the barrel, extending out to infinity.

There are a few other reticles offered by the various makers of them, but the most common of course is just a dot.

The dot itself is sized in Minutes Of Angle (MOA), which is the crux of what we’re discussing in this article.

Minutes Of Angle: A Brief Overview

1 minute of angle is roughly equivalent to 1 inch at 100 yards. So if you’re shooting, say, a rifle out to 100 yards, and the rifle shoots 2 MOA groups, that means the shots will all land within a 2 inch area provided the shooter aims at the same point on the target.

This matters, as a bigger dot is easier to see and faster to get on target. However, a smaller dot produces a smaller group at longer distances and therefore allows for far more precise shooting.


Getting Your Red Dot Priorities Straight: Speed vs. Precision

A red dot reticle will, therefore, produce something of a spread at given distances, or in other words, the shots will land within a specific area provided the shooter is perfect, and the dot is placed on the exact same area on the target every time. You, therefore, have to decide what your priorities are and thus make the correct selection of optic for those purposes. You’ll pick up bigger dots and get on target at close range more quickly, but you lose precision at further distances.

It’s like buying a rifle scope. The most popular is definitely the 3-9x40mm, but it isn’t the best for all purposes. For rifle hunters shooting whitetail across a South Carolina bean field, it’s too much magnification and too narrow a field of view; a 4X fixed-power or 2-7x scope is a better choice. For long-range target shooters, 3-9x isn’t enough magnification. However, for rifle hunters in the Mountain West, a 2-7x30mm scope is not enough magnification, and a 6-24x50mm scope is a ludicrously large and heavy scope to put on a gun that you’re toting up and down the mountains.

Now, for defensive purposes, a 6 MOA dot is just fine; 3 inches at 50 yards is more than precise enough. Even going up to 8 to 9 MOA for defensive purposes is just fine; that’s 4 to 4.5 inches at 50 yards, which for center-mass hits is plenty precise enough. Since statistical likelihood favors being able to shoot fast at close distance, erring on the side of bigger is probably the best medicine. However, if you want to cover all contingencies – precision shooting at a further distance AND reasonably quick sight acquisition at close range – a reticle between 3 MOA and 5 MOA will give you the best of both worlds.

So, you need to make the best choice for you and your intended purposes. If what you’re after is see sight quick, go boom quick and at close distance, get a bigger dot. For the utmost in precision for target shooting or hunting with a handgun, a dot of 4 MOA or less is a good idea, with 4 MOA to 6 MOA being a good middle ground between fast sight acquisition and precision.

The Wizard Drill: Can You Meet the Wizard’s Standard?

The Wizard Drill: Can You Meet the Wizard's Standard?