The Wizard Drill: Can You Meet the Wizard’s Standard? 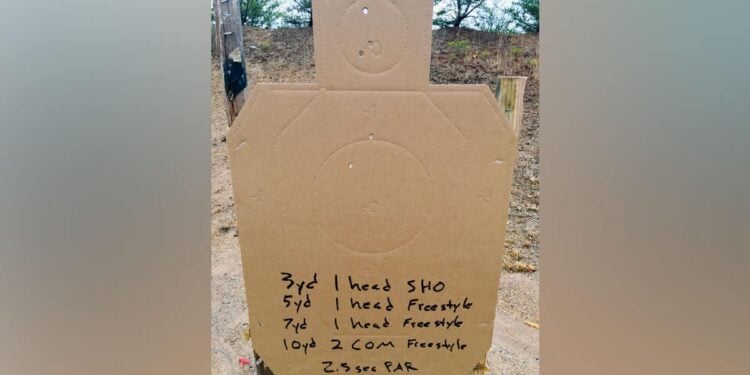 It could maybe be said that Ken Hackathorn is like the wise wizard of the firearms training world, and he has a drill called the Wizard Drill. In reality, it is less of a drill and more of a test. It is meant to be shot with carry gear, as it is carried, and with duty/carry ammunition. As such, it is only a 5 round test. The Wizard Drill can also be shot with any gun that we might carry; anyway we might carry it. No excuses to not see where we land with that Ruger LCP or S&W J-frame out of a pocket holster. Few other skills tests are intended to be shot with literally anything.

The test is based on a 2.5 second PAR time. Each of the four strings of fire has the same 2.5 second PAR. The drill calls for an IDPA target, scored as the target normally would be with points down. Shooters are allowed 2 points down out of the entire test. Any headshots completely missed or PAR times blown, and it is considered a failure. With a full-size gun, going zero points down is a good goal, and not super difficult. With smaller guns that tend to be a bit harder to shoot, the 2 point wiggle room will likely be welcome. Whether the drill is shot clean, or with 2 points down, it would still be considered a pass as long as the PAR times are met.

I shot the test with a Sig P250c out of a Dark Star Gear Orion AIWB holster, concealed under a fleece pullover. There was not any prep before shooting the test other than setting up the target. I came to the range wearing the P250, stuffed with 124gr +p Gold Dots, and that is what I shot the drill with. The most challenging string of fire for me has been the first string of fire. This highlights shortcomings in my own practice. I spend a fair amount of time in dry fire, working the two-handed draw and getting two hands on the gun. I rarely, if ever, practice strong hand only draws and shooting. Especially not at speed. The five-yard string, even though it is a smaller 4″ target, is probably the easiest. The 7-yard and 10-yard strings are about the same difficulty wise.

The Drill’s One Weakness

Shooting the drill cold, it is a good barometer of acceptable skill, which is the intended purpose, but it doesn’t have much value as a performance tracking metric. Since the Wizard Drill is set up with a simple pass/fail scoring system, it is very limited as a tracking tool since it does not indicate level of performance other than as pass or fail. If someone is at the point that they can easily pass the Wizard Drill, a change to the scoring method can make the drill more useful as a performance tracking tool that can grow with the shooter. Scoring could either be tracked as total time plus penalties (like the IDPA 5×5 Classifier) or as “points per second” (USPSA style scoring). Either system would work to give a scoring system that would allow tracking performance beyond just passing.

The Wizard Drill is a quick and dirty go/no-go assessment of one’s skill level with whatever gun they choose to carry, however they choose to carry it. While it seems really simple, and the PAR time might be considered a bit generous by some people, this is not the easiest standard in the world, especially with sub-optimal handguns (i.e., pocket guns, sub-compacts, et al.). For its intended use, it is an easy-to-shoot test with a low resource requirement. If someone needs it to grow with them, a little tweak to the scoring adds the ability for the test to track performance and continue to challenge the shooter. Give it a try and let us know how you do in the comments.