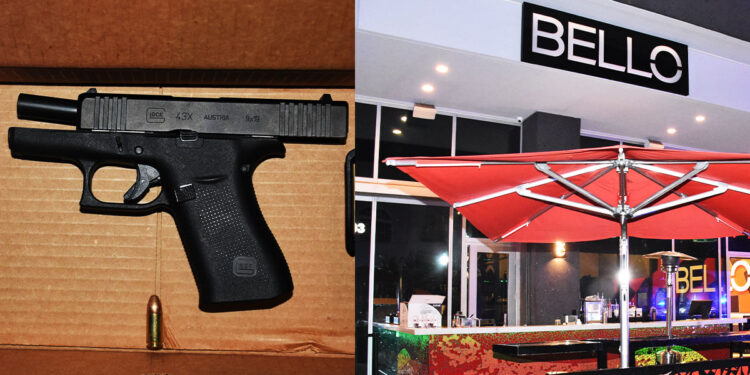 The following incident took place on Feb. 28th outside of a Tampa, FL restaurant. Thanks to security cameras, investigators were able to corroborate the victim’s story and rule the shooting justified.

According to a State Attorney’s Office statement, the victim and his girlfriend were inside the restaurant when he and another man got into an argument. This caused the other man’s two friends to get involved. The three men crowded the victim until he left the restaurant and walked to his car. While he was gone, one of the men was seen on camera grabbing a butter knife and a glass.

When he returned to the restaurant, the man he initially got into an argument with punched him in the head. This caused the restaurant staff to force the men outside. The man with the glass threw it at the victim and started stabbing him with the butter knife. The men knocked the victim to the ground and started beating him.

Somehow, even though the victim was outnumbered 3-1, he was able to get to a knee, draw his concealed firearm, and fire multiple shots. One of the shots struck one of his attackers in the head, killing him. It is unclear if any of the other men were struck by the gunfire, but it was reported that they survived.

The victim fled the scene fearing for his safety but returned shortly and cooperated with the police. He surrendered his firearm to the police, which he was legally able to carry since he had a Florida Concealed Weapons Permit. After an extensive review of the case, the State’s Attorney determined that the victim acted in self-defense.

After reading the review, I wonder if the victim went to his car to arm himself and then went back inside the restaurant. The shooting was ruled justified, so I’m not disputing that. I wonder if the shooting could have been avoided if he had just left the restaurant. His girlfriend was in the restaurant, so was he in fear of her life, or could he have just called her to tell her to meet him outside and leave the scene. I can hear the comments now saying that’s being a coward and letting the thugs win. But I would rather avoid all conflict and confrontations if at all possible.

Florida Sheriff: “You’re Welcome to Shoot Intruders, We Prefer You Do, Actually”

Florida Sheriff: "You're Welcome to Shoot Intruders, We Prefer You Do, Actually"

WTF? He left his girlfriend alone in the restaurant to go to his car??? That makes zero sense. Clearly he should have asked the restaurant folks to call the police, if nothing else. You don’t leave your girlfriend to fend for herself while you go to your car, even if it is for a weapon. He’s very lucky to not catch charges…..dumbass!

Why do you immdiately presume the worst about the victim in case such as this. It is also possible that he went to the car to calm down and returned to the restaurant to finish a pleasant night with his girlfriend when he was again accosted by the perps. Disparity of force is clearly at play here and he was completely within the law to defend himself with deadly force. You need to take a more balanced approoach to situations such as this and not alwyas presume the victim did not do enough to avoid having to defend him or herself.

I’m not saying that’s what happened here. I just used that as an example of if that is what he did then there may have been a better way to handle the situation.

If he was able to go to his car, he and his companion should leave at that moment. Ego battles are always for losers.

If the victim was able to leave and go to his car, then he and his girlfriend should leave at that moment. He was lucky none of the a-holes who attacked him used a real knife. Ego battles are for losers. He should leave at the very first chance and AVOID escalate the incident, evenif he was in the “right.” You just leave and fight another day.

No issue at all with him shoting the guy. You can Monday Morning QB everything, but the bottom line is “Justified”… Case dismissed