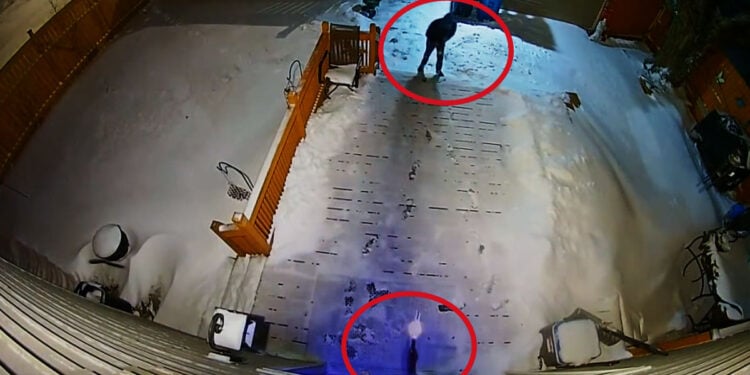 We covered this story when it happened, but we’ve got more details about what actually took place thanks to home surveillance footage. Ultimately, the case was ruled self-defense, and neither the homeowner nor her son will be charged.

A man was prowling around a Minneapolis home late one night in late February. He can be seen in the video (below) checking the wooden gate to the backyard to see if it was unlocked, which it wasn’t. Then he jumps over the fence and walks up to the home’s back door.

The homeowner heard the suspect wiggle the door handle and his steps on the deck. She told her son someone was trying to get into the house and grabbed her handgun. The son also grabbed a gun, one report stating that it was a rifle.

After finding the backdoor locked, the suspect turned around and walked into the detached garage, which was unlocked. The homeowner opened the sliding backdoor and fired two warning shots. The homeowner and her son can be heard on the video telling the suspect to get out of their garage.

Another shot is fired as the suspect walks out of the garage, which seems to have come from the son’s firearm. But instead of hopping back over the fence after three shots are fired at him, the suspect turns and walks toward the homeowner and her son. After firing two more warning shots, the homeowner’s son fired one more shot, fatally wounding the suspect. The police arrived on the scene, finding him deceased face down in the snow.

The incident caused protests by the suspect’s family and friends. But after reviewing the video footage of the incident, it was ruled self-defense, and the homeowner and her son will not be charged.

“My clients were acting completely in self-defense. They gave warning shots. They said go away. And he continued to approach their home. It was clear-cut,” said Minneapolis criminal defense attorney Joe Tamburino, who said he is representing the mother and son pro bono. – via KARE 11.

Warning shots? What goes up .. must come down..that could be in someone else’s home or body. Don’t fire warning shots!!

Absolutely, 100% in agreement. Actually, if you are able to shoot “warning shots” that means your life is not in an immediate danger. And the use of deadly force is not warranted.

I am a concealed carry instructor in Minnesota and as such I am somewhat concerned that readers will think that firing “a warning shot” is a good idea. I am glad that this mom and son didn’t suffer the consequences, but prosecutors will frequently use a “warning shot” against the victim saying a) “the shooter meant to shoot my defendant but missed,” or b) “that was a negligent discharge proving that the victim didn’t have the necessary skills to possess a firearm,” or c) “the victim was clearly intent on killing my defendant and started shooting before there was any threat to them of death or serious bodily harm.” Minnesota does not have a Stand Your Ground law and this encounter took place outside of their home (Castle Doctrine). Further, Minnesota law (and other states to my knowledge) generally do not allow you to use deadly force to protect property. Call police, become a good witness (including pictures/video), and prepare to defend yourself if the attacker enters your home and threatens your life.