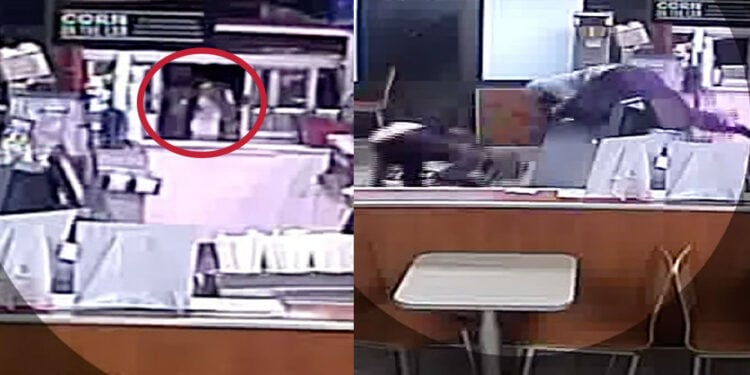 Two armed robbers got more than they bargained for when they attempted to rob a Church’s Chicken fast food restaurant back on Oct. 1, 2021. And surveillance footage of the incident was just released.

Around 8:45 PM Oct. 1, 2021, two men armed with handguns barged into a Church’s Chicken restaurant in Port Arthur, TX. Without hesitating, they both hopped over the counter and threatened two employees. Both can be seen being forced toward the back of the restaurant at gunpoint. One customer was at the counter and then fled out of the front door once they realized a robbery was taking place.

One of the customers in the drive-thru line saw what was going on, armed himself, and opened the drive-thru window. He takes a second to assess the situation and then aims his handgun. It seems like he shot at least once, causing the armed robbers to start to flee the store. As they come into sight and are trying to get back over the counter, he engages with them again.

Both armed robbers were hit by the gunfire but managed to flee the restaurant over the counter. One of the suspects died at the hospital, and the other was located by police shortly after. The surviving suspect will be spending 30 years in jail after pleading guilty to an aggravated robbery that ended with the death of a second suspect.

“This violent robbery could have ended much worse,” Prosecutor Luke Nichols said. “Ingram and his accomplice threatened and terrorized the store employees, and we are all grateful none of them were injured. The citizen who intervened likely saved their lives that night. A quick and thorough response by PAPD took another violent offender off the streets of Port Arthur.” – via 12 News Now

The armed citizen had a license to carry and was not charged.

The Armed Citizen could very likely have saved the Church’s Workers lives. How many times do we read of such incidents happening that end sadly with all the workers killed in the freezer or backroom.?? That responsible citizen should at least receive free Church’s Chicken for a couple of years and a Community Hero Citation. Incidents like this though are why I never leave home unarmed.

7
Reply
No Result
View All Result