Houston, TX – In what appears to have been a road rage incident, one man is in stable but critical condition after being shot in the face.

Shortly before 2:20 PM this past Wednesday, two drivers got involved in a road rage incident. One man, who had a concealed carry permit, was driving a box truck, and the other man was driving a sedan.

Both men told the police that the other man cut them off. The incident continued for miles until both vehicles exited the freeway. While at a stop sign, the man in the sedan got out of his car, walked up to the box truck, and then tried to open the driver’s side door of the box truck.

The man in the box truck who has a concealed carry license drew his firearm and shot the other man in the face.

The wounded man was taken to the hospital and is now in stable but critical condition.

Deputy Thomas Gilliland, of the Harris County Sheriff’s Office, said they are not filing any charged, but the case will be presented to a grand jury.

We’re talked about road rage numerous times here on USA Carry. We have the article, Gun and Road Rage, which takes a closer look at road rage and what to do if you find yourself in a road rage incident.

We don’t have a lot of details from this incident. We don’t know who was the aggressor or if both men are to blame. The police didn’t initially file any charged against the shooter, so there must be a reason they thought the shooting was justified. The police do have witnesses, and the concealed carrier also called 911 before the shooting took place.

And it is hard to say this without having been there, but I would have rather seen the concealed carrier drive off as the man was trying to open his door instead of shooting.

One thing we can take away is that if you are involved in a road rage incident like this, be prepared to safely flee the scene if someone gets out of their vehicle and approaches you. Don’t wait around to find out what they want. I doubt they are getting out to tell you how you are such a great driver. Anyone getting out of their car is probably seeing red already. So do your best to remove yourself from the situation if at all possible.

You Are on Your Own: Inspiring Others to Prepare 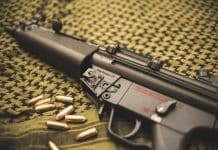 Is Full-Auto Overrated? A Modest Proposal