Concealed Carry Tunnel Vision – How To Break Out Of It 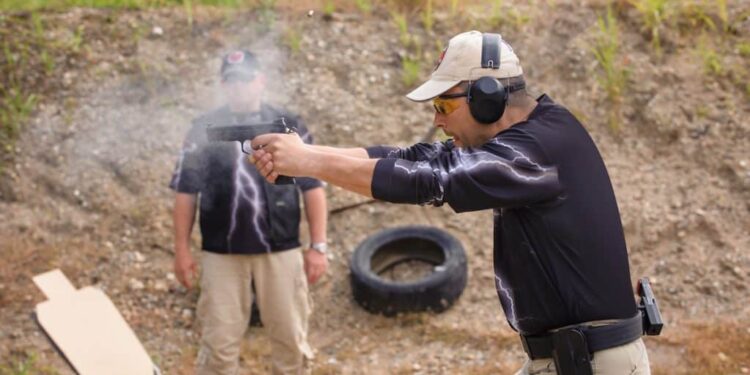 On the range, there are restrictions on where you can shoot. For instance, most gun ranges keep their berms on three sides, with the primary focus being on the far end. The far end likely doesn’t lead to another range or any place any person or animal needs to be going.

This setup is a pretty safe, proven design that prevents people from getting hurt. The problem is that repetition and training, while good, can lead to tunnel vision. Concealed carry tunnel vision is when a concealed carrier has practiced for so long at shooting targets straight in front of him that he forgets to look around him.

Forgetting to look around has been humorously “addressed” by the classic YouTube “left/right tactical look” before re-holstering. It’s cute. It shows the concealed carrier is aware of his surroundings before attempting to reholster his firearm. However, it’s a demonstration of showing. It’s not actual scanning.

While you’ll still be shooting within a 25-50° cone, you can still get used to scanning, moving and engaging targets.

This would probably work best in an outdoor range environment where you have the capacity to move laterally.

Designate three lanes and put up three targets in each lane. Each target should be at a different distance — but in no particular order. Try 10, 8, and 15 yards for your first run. Starting from the draw, place two rounds in each target. Added fun: time yourself doing it.

This activity works on alternating targets, distance, and transitioning from one target to the next. That’s a lot of complex skills, but they gradually build up to give you proper transitioning between targets. You can mix it up by having your buddy designate one of the targets as “non-hostile” and the rest as hostile. Turn around, so you don’t know which is which. Turn around and engage the targets when your buddy says “go.”

That bonus pushes a genuine necessity to determine hostility before engaging targets. While designating “blue target is non-hostile” may not directly one-for-one equate to real-world ability to do the same, it’s an added muscle memory reflex that can help you if the real event comes up.

You can pay big bucks to go through a “blue gun” real-life scenario gun course. These courses are expensive but give you the benefit of roleplaying through realistic scenarios where you may need to use a gun — and having an honest evaluation of your ability to handle it.

For those that aren’t into dishing out that sort of dough, there’s always the woods. Setting up a reactive maze requires an accomplice. Set up a perimeter with a string tied between trees. These are your “walls.” You can match these dimensions to real-life places — like your home or office. From here, you can practice moving through structures, differentiating targets, scanning, and moving.

You can use airsoft or paintball guns if you want to have a buddy post “good guy” and “bad guy” targets. The level of complexity and difficulty is entirely left up to you. Please don’t use actual firearms in non-controlled conditions. There’s plenty of alternatives that will build that same necessary hand-eye coordination without risking injury to anyone.

The basic strategy for breaking out of concealed carry tunnel vision should always include expecting a target outside of your front-line view. If you train to break contact with the front to pay attention to the sides — and have a reason to do so — you will find it’s a lot easier not to get hung up about just the targets in front of you. Remember: how law enforcement and military train to clear rooms and move through buildings won’t apply directly to your average concealed carrier. It’s still important to know that the bad guy in front of you may be accompanied by a bad guy around you.

How Far Away Is Your Concealed Carry Pistol?