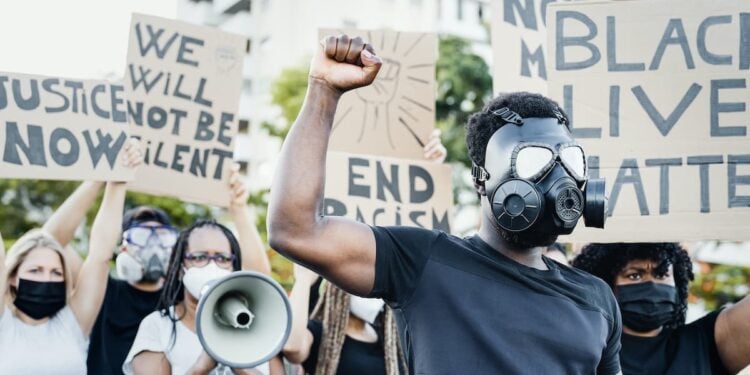 Dealing with violent protests is nothing new in the United States as every decade has seen its share of problems. The past few years, however, have witnessed an escalation, and the past few months has been especially tumultuous.

In the wake of the death of George Floyd, protests have erupted, and a good portion of them have turned into violent riots in which a lot of property has been damaged and people have been hurt and killed.

The possibility of getting unexpectedly caught in such a dangerous situation has led many armed citizens to increase their diligence in going armed, and for good reason. A debate that has long raged among the gun community is that of concealed carry versus open carry, and this debate has morphed into a new line of dispute regarding going armed during protests.

What are the considerations?

A resounding chant among those who promote open carry is that the display of an open firearm works towards dissuading criminal activity. Certainly, in theory, there is some merit to this argument. Most of the many thousands of defensive gun uses each year are resolved without a shot being fired. The sight of the gun is often enough to end hostilities. Carrying this logic forward, the sight of an individual openly carring may work towards dissuading criminal activity. I am firmly an advocate of concealed carry, though there may be appropriate time and place for open carry. However, I strongly argue that the middle of a riot or protest is not one of them.

Now, before proceeding, understand that there has been many incidents in which individuals or groups have stood guard in businesses or neighborhoods with openly carried firearms, long guns in particular, in order to dissuade violence. This has been done successfully numerous times. A congregated group of business owners or neighborhood residents standing guard of what is theirs is arguably a reality that more and more citizens may face as mob violence escalates, and this action may serve a valid purpose. However, in this discussion, we focus on the actions of the individual who may find themselves caught in civil unrest, perhaps involuntarily. As the person stuck in the wrong place at the wrong time, how does concealed carry and open carry factor in?

The Volatility of Mobs

Agitated and aggressive crowds of people often act as a single entity that quickly devolves to the lowest common denominator. As soon as a bad actor throws a brick, a protest is likely to devolve into a riot. Likewise, the mob mentality can lead multiple individuals to quickly turn on a single individual in the vicinity that stands out as a figure of opposition or simply someone who does not belong. Escaping such a situation unmolested is best accomplished by blending in and not drawing attention to yourself until able to escape the mob. It is for this reason of necessary discretion in appearance that open carry proves problematic in crowds.

Within an angry demonstration, the sight of an openly carried firearm can potentially add to hostilities rather than quell them. Again, an exception may be an open show of force from armed neighborhood people or store owners protecting their homes or businesses, but the open carry of firearms within the midst of hostile demonstrations has not proven to dissuade violence. If caught in a situation where you must navigate an angry crowd until you can escape the situation an openly carried gun is likely to draw attention that you don’t want. A concealed pistol, readily available for use but hidden from observation, facilitates going armed and prepared while maintaining an unnoticeable profile.

There have been numerous incidents in recent years where open carry has attracted attention to individuals within demonstrations from law enforcement, and such attention can prove detrimental. If in a hostile environment in which the law enforcement presence feels threatened, the sight of a firearm may trigger a response that is deadly. This is especially true of openly carried long guns, as slung rifles can be spotted from far away and certainly proves conspicuous.

Beyond just the possibility of a force response, carrying an open gun in a demonstration can also lead to legal ramifications. An accusation of threatening behavior can be brought against you by a malicious demonstrator who wants to retaliate against another citizen who goes armed. Such an accusation can certainly be made more easily if you are the only individual in a crowd walking around strapped.

Also consider the possibility of becoming a suspect for something you have not done. Following the attack on police in Dallas in 2016, where five police officers were killed during a protest by a single assailant, another man who was in the crowd and peacefully marching with an openly carried rifle was immediately a top suspect. While quickly cleared of any wrongdoing, the openly carried rifle led to him being on the radar of law enforcement.

While open carry certainly has a place in some environments, demonstrations of civil unrest within urban areas are not among them. Handguns should be carried concealed during such an event so as to not draw attention, and if a long gun is kept in a vehicle it should be stored in a discreet looking case so that it can be carried as something that looks like only a backpack or sling bag. Discretion is the better part of valor during such activity. Give it some thought.