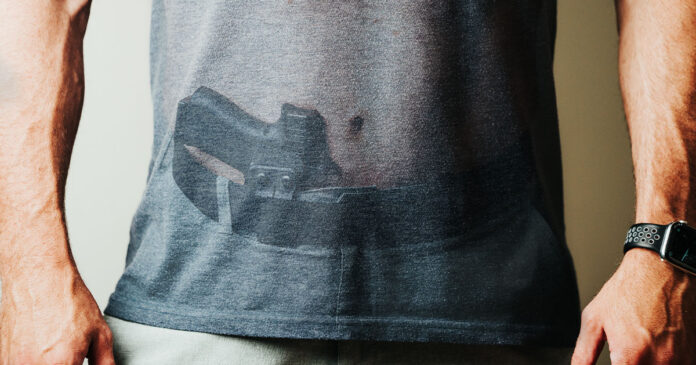 As a self-defense practitioner, specifically concealed carry, the most important thing that needs to be understood is that you are carrying a deadly weapon on your person. Legalities on your side or not, the general public may not be so fond of the idea that you have a firearm. All too often, the phrase “printing doesn’t matter” is thrown around. That statement itself oversimplifies the concealment process and undermines the ideology behind carrying a concealed firearm for self-defense. If one is okay with printing, they are likely giving away more than just their firearm.

Whether you are starting your concealed carry journey or have been carrying for decades, it would be beneficial for all to understand what true concealment means. There is a global misconception of what constitutes concealment, and as a gun community, we are to blame. By definition, concealment is to prevent disclosure or the recognition of. Nowhere in that definition does it mention the act of carrying a firearm for self-defense. The very essence of concealment is the ability to hide something from being known. Simply covering your firearm with a shirt may very well meet the legal definition of concealment. A shirt reading “I’m carrying a gun” is far from ideal.

Tells are not just in poker.

Take a moment and consider what is being given away the moment you step foot outside of your home. What you wear, where you are going, and how you carry yourself are all factors that play a part in concealment. While there are some factors that you cannot change, you most certainly can affect how they are perceived. There are three surefire ways to determine if you are giving away more than you might think.

What are you wearing?

The phrase “dress around the gun” is used often when new concealed carriers are beginning their journey, but what does that mean? Typically, the phrase is a tongue-in-cheek way of saying you need baggy clothing, but that’s far from the truth. It would be awfully peculiar to wear jeans and a sweatshirt on the beach. Likewise, it would be atypical to wear casual attire to a formal event. Would wearing firearms-branded clothing stand out at the shooting range? Not likely, but it most certainly may be in a suburban supermarket. Are your choices limiting your ability to blend in with the crowd? Furthermore, are your choices limiting your ability to access your firearm? All of these choices play a role in your ability to conceal not only your firearm but also conceal the possibility that you may be an armed individual.

Where are you going?

This is something that many tend to overlook for the sake of carrying a firearm. You absolutely have every right to defend yourself, and it’s the sole reason for carrying a deadly weapon. However, you must assess the risks associated with the environments that you may be in. There are risks with everything, some more severe than others. Is your right to defend yourself worth more than all of the possible negative outcomes. That’s something everyone must evaluate for themselves. As a recent example, a well-known firearms instructor was attending a major sporting event that prohibited firearms. He chose to carry a concealed firearm regardless of the known risk of being caught. A photo was posted to social media with a vague statement that the instructor was possibly carrying a firearm and successful in bypassing security measures. This photo was seen by many, including an individual that notified the security team. The security team then contacted the instructor, and he removed the post. Fortunately, the outcome was not very severe, and the only known repercussion was to remove the posted photo and caption. This in itself should be a lesson to all concealed carriers. Simply concealing a firearm on your person isn’t enough to prevent individuals from discovering you have a firearm. Regardless if the goal was to draw attention or to educate, it allowed another individual to raise alarm to the possibility of the instructor carrying a concealed firearm.

How are you presenting yourself?

For some, the environment that they frequent may not be friendly to firearms. Again, there may be associated risks with carrying, potentially as severe as losing a job. That’s a risk the individual must assess on their own. Due to this, extra precautions must be taken when the risks are high. Do you wish to be known as the “gun person” in an office setting that has policies against carrying a firearm? Perhaps limiting the amount of gun talk around the break room may just save your job. In addition to how you speak, the concealed carrier should be conscious of their mannerisms when carrying concealed. It’s common for newer concealed carriers to have the abnormal feeling of carrying and the obsessive need to readjust a garment. Fear of being made is something all concealed carriers have had in their minds at some point, whether they openly admit it or not.

Concealed carriers take on more responsibility once a firearm is hidden on their person. You are no longer just carrying a firearm for self-defense. You are doing so in a manner that is designed to prevent criminals and the people around you from knowing that you are armed. The act of concealment goes beyond the firearm on your person, and it’s about time things are taken a bit more seriously.