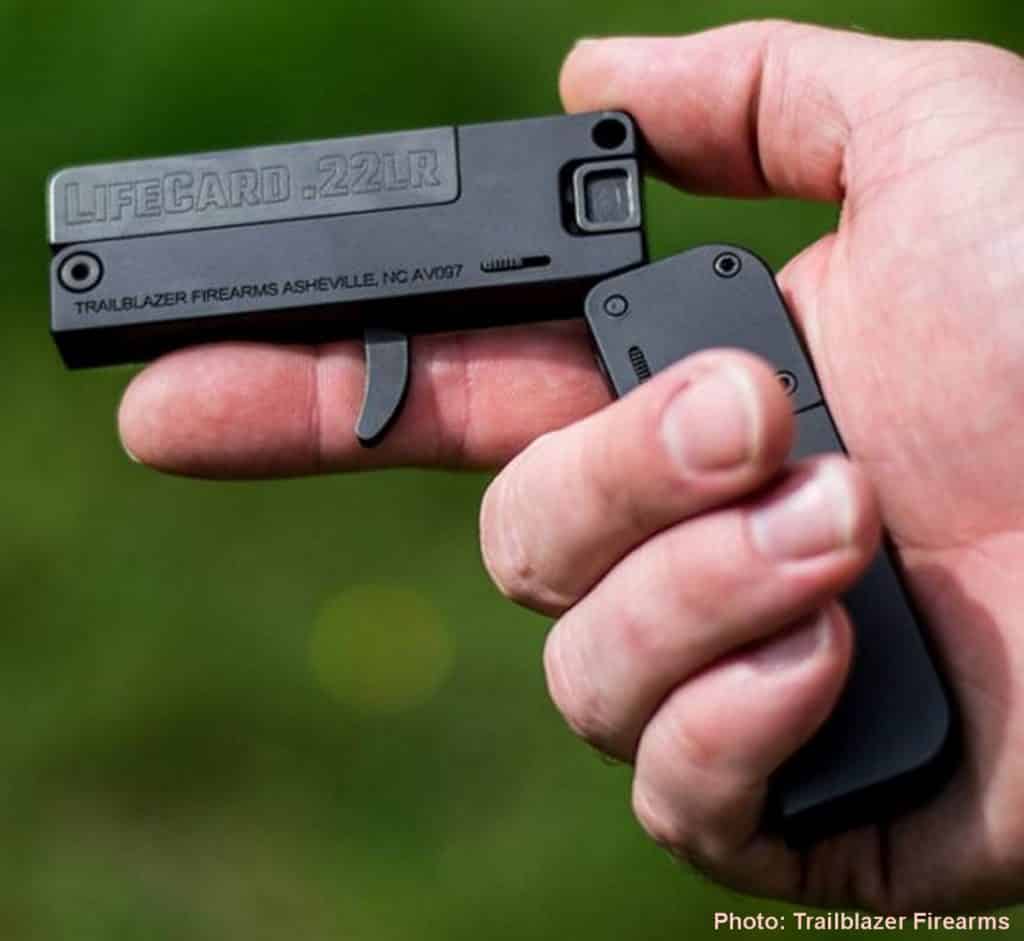 How about a fun plinking pistol that weighs less than 7 ounces, is only .5 inch wide, and has an overall length of 3.375 inches? Well, this discreet, sleek, no-snag designed pistol is about the size of a credit card when folded. This .22LR American-made pistol is designed, developed, manufactured, and marketed by a North Carolina firm called TrailBlazer Firearms, which was founded in 2014. Some folks who have trouble racking a slide or loading/unloading a pistol might find it easier with this pistol, since the barrel lifts up so you can place a round into the chamber.

One glaring characteristic of this new pistol is that it holds only 1 round and that is a .22LR round. While you can store 4 more rounds of ammo in its handle, there is only one in the chamber, no magazine with extra feeding rounds, and it will take some time to load another into the chamber after the first fires. I guess one shot is better than no shot at all.

But, is there a market for this particular type and design of pistol?

I’ll bet it will be fun to shoot, but only time well tell how it is received. The pistol starts shipping in mid August. A nice feature is that the LifeCard .22LR is completely ambidextrous. It is interesting to note that Aaron with the manufacturer told me when we talked by telephone that this pistol is “not a pistol that is designed for nor should be relied on for self defense.” But, it would be a fun addition to anyone’s firearms collection. He said it is “for recreational shooting.” So for me, this is a novelty plinking gun for fun. Not a concealed carry primary gun.

Like the lightweight .380 two-rounds cellphone pistol I reviewed a few weeks ago, there are other miniature and lower caliber guns on the market now. Now, we have the Taurus Curve, the North American Arms (NAA) mini revolvers and miniature pocket pistols, and other very small, derringer-like, and disguisable unique handguns. But they all closely resemble a gun in some way and are not really that unique and novelty guns. They are also small but designed for concealed carry, while this LifeCard .22LR is not designed for concealed carry and personal defense, according to the maker.

I had questions about how it safely loads and unloads. What types of safeties does it have? How do you use the half-cock position? How do you properly unfold and fold it for safe and effective operation? Can you quickly get it operational? Could you possibly carry it SAFELY with a round in the chamber? How about quickly reloading it? Does it have a magazine or some place to store extra rounds? 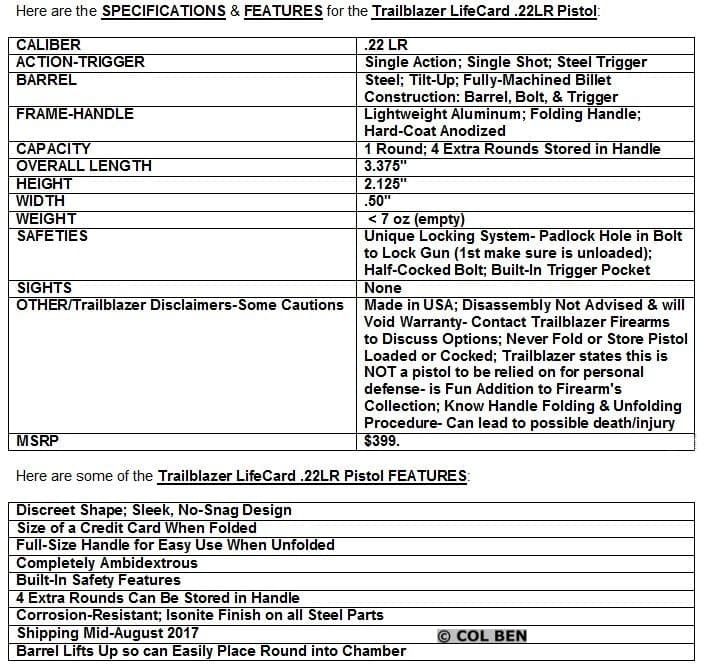 Next, I want to identify the safety features of this pistol. Here is what the LifeCard Instruction Manual says: 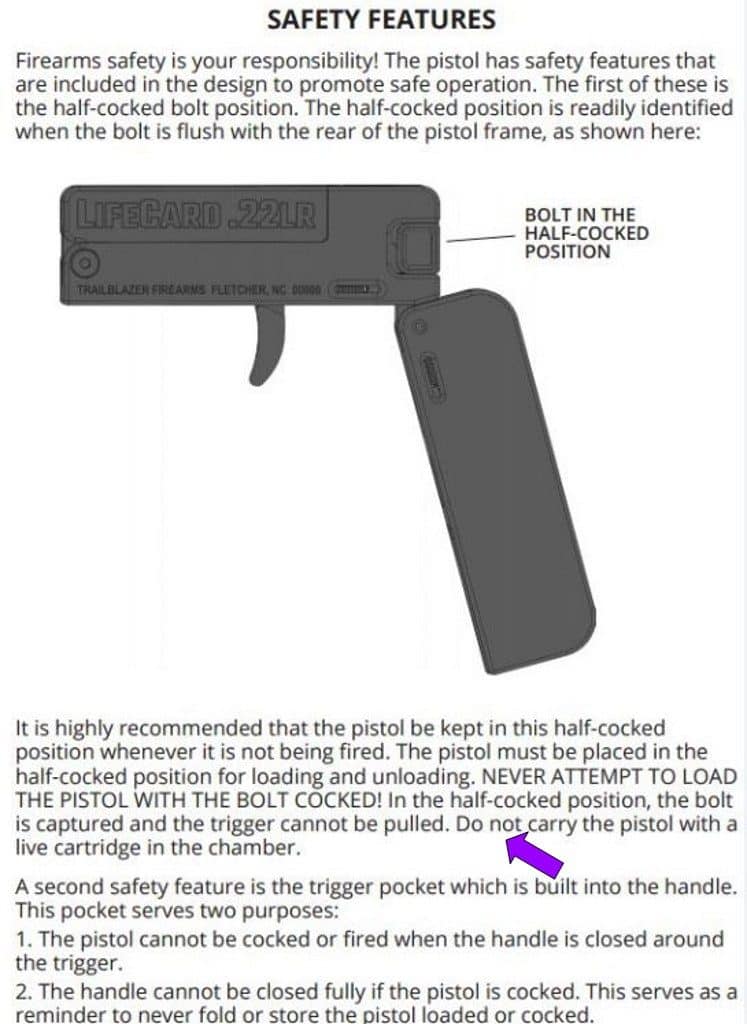 It is interesting to note that the Instruction Manual says above “Do not carry the pistol with a live cartridge in the chamber.” In essence, this means to me that the pistol is NOT designed nor intended for concealed carry and personal protection. 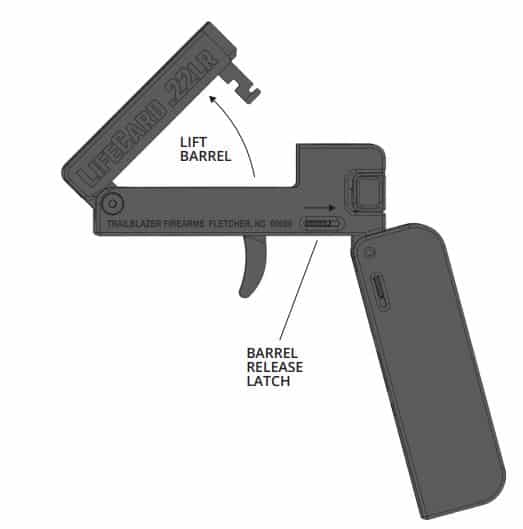 Above is an image of the LifeCard’s tilt-up and lift Barrel and the Barrel Release Latch from their website. This facilitates loading and unloading the single .22LR cartridge, especially for those averse to racking a slide or handling a magazine to feed cartridges. Similar to the Beretta Bobcat.

As with any unique and new innovation, there will always be concerns expressed.  Some comment on the safety of the credit card-sized small .22LR. Is it a safe pistol to operate and how do the safeties work? Well, it has a unique locking system. Here’s what the Instruction Manual says about the locking system. 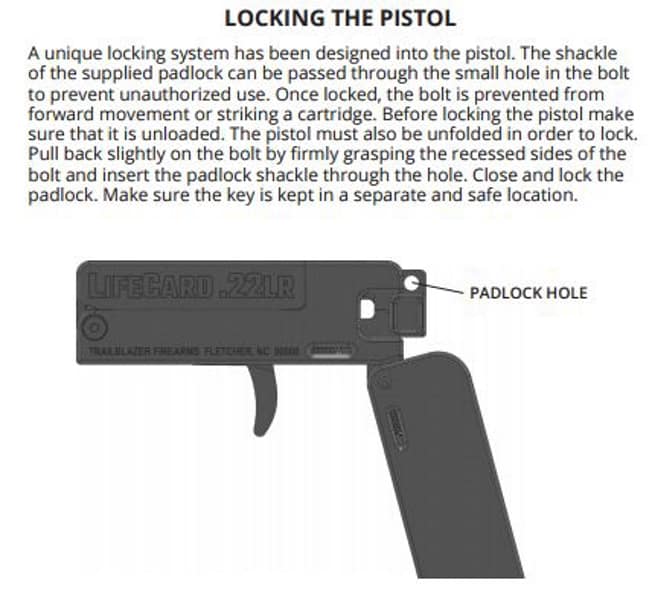 Cocking and Firing the LifeCard pistol correctly is important. The Instruction Manual stresses to always return the bolt to the half-cocked position, after firing it. 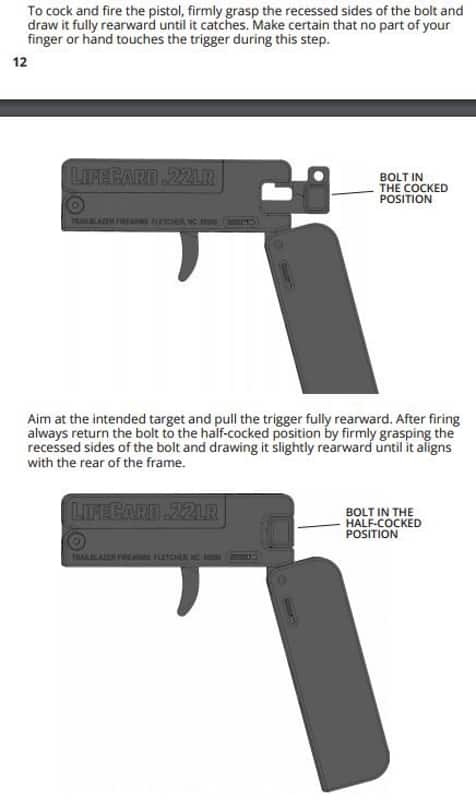 Here is a summary promotional sheet for the Trailblazer LifeCard .22LR Pistol. 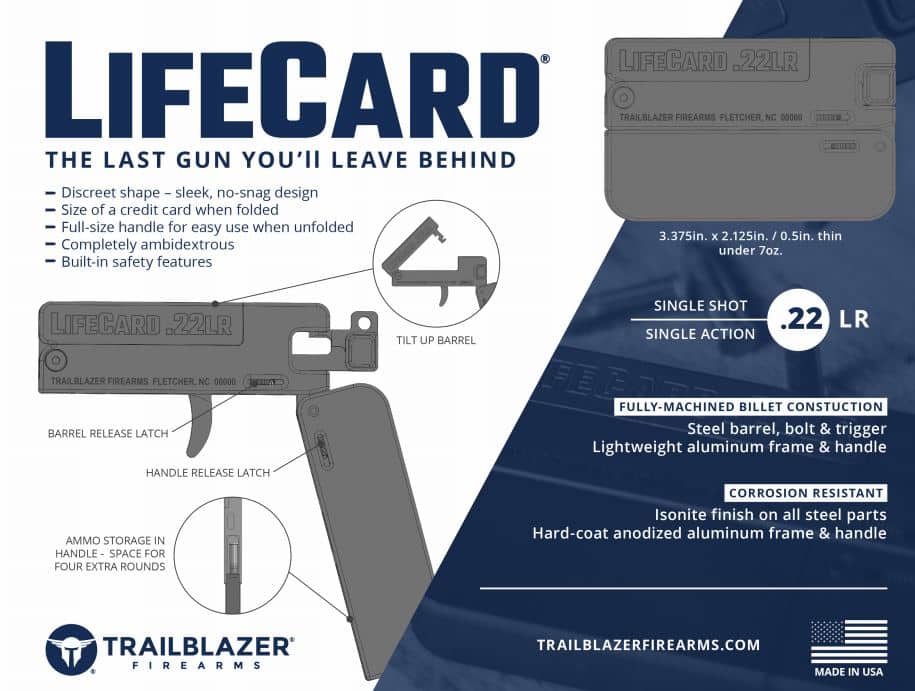 Well this unique pistol has several pros and some cons for it. Some say the pros include its small, lightweight, and slender shape and size, its ambidextrous accommodation, its built-in safety features, fun plinking with it at the range, and its steel barrel, bolt, and trigger with an aluminum frame. Others claim the negatives include its single shot capacity, its .22LR small and less powerful caliber (some want it in .22WMR and/or .380 caliber), its high MSRP of $399., its non-existent sights or very small v-groove on top of the barrel, and that the manufacturer says it is not designed for personal protection. Is it a unique gimmick and novelty?

What are your thoughts about this unique and fun pistol?  Would you consider buying it? How would you use it? Is it a safe pistol? Is the retail price right for you? 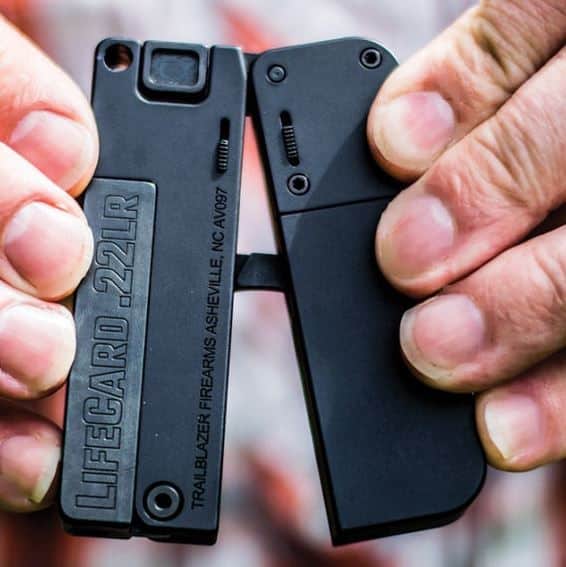 Be Safe my friends!