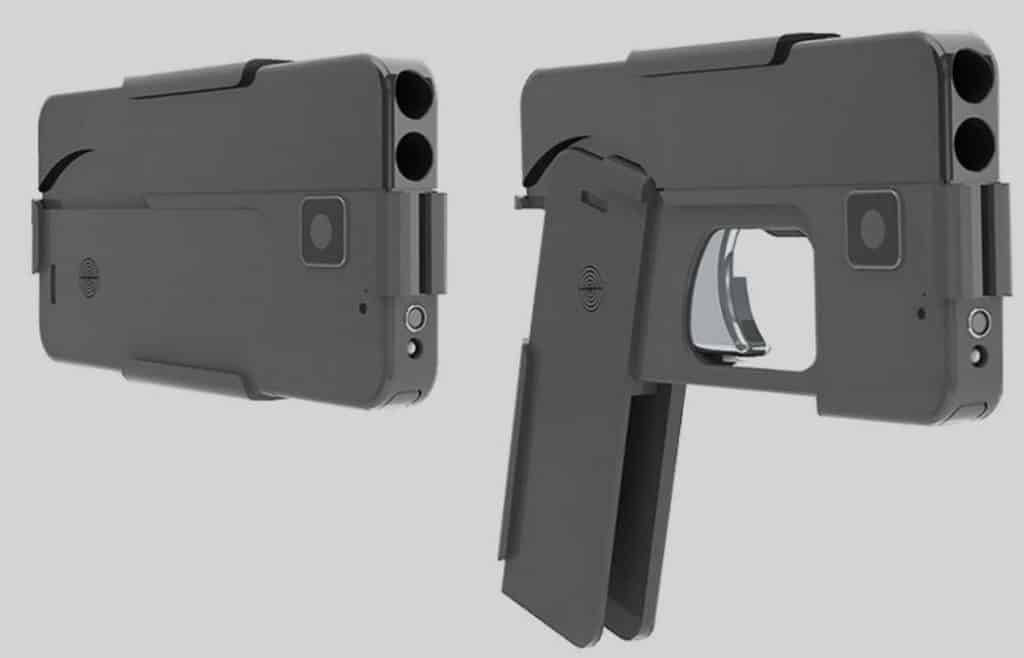 Well, the above left image might look like a smartphone, cellphone, or square iPhone to some folks, but it is a .380 pistol. A casual observer might not readily identify it as a gun, but when unfolded with the safety off on the right above it looks like one. Yes, we have the Taurus Curve, the North American Arms (NAA) mini revolvers and miniature pocket pistols, and other very small, derringer-like, and disguisable handguns. But they all closely resemble a gun in some way and are not really that unique and novelty guns. They are fine small and concealable guns and I have reviewed the Taurus Curve .380 and the NAA Black Widow .22 Magnum guns, for example, previously on this website. But what about this new .380 pistol that resembles a cellphone or a smartphone when it’s folded?  I contacted the Chief Executive Officer-Inventor of this Ideal Conceal Company‘s new carry gun, asked him some questions, and got some answers and information I want to share with you.

The Minnesota-based company is called Ideal Conceal and its founder-inventor-Chief Executive Officer is Mr. Kirk Kjellberg. His company’s promotion states that:

“Off duty police officers, realtors, hospital employees and more have expressed a need for a discrete gun that can be carried even when wearing summer clothing like shorts and a t-shirt. The solution is a smart, safe alternative to the ordinary pistol and can be worn no matter how you dress. It’s light, tough and more comfortable than any other pistol on the market. The solution is Ideal Conceal’s ‘Cellphone Pistol.’ The hammer is hidden inside the pistol, making it impossible to misfire  by snagging the hammer on clothes or other objects. The pistol has a built in handle lock for safety when you’re not carrying it.”

The company says that in April of last year, “it generated more than 1,000,000 Facebook visits, 500,000+ website views within 60 days, generated 15,000 emails in April alone, and began a grassroots pre-order campaign that resulted in 725 pre-sales and over 200 dealer signups.” So what about this new .380 derringer carry pistol? I want to share with you some things I learned. 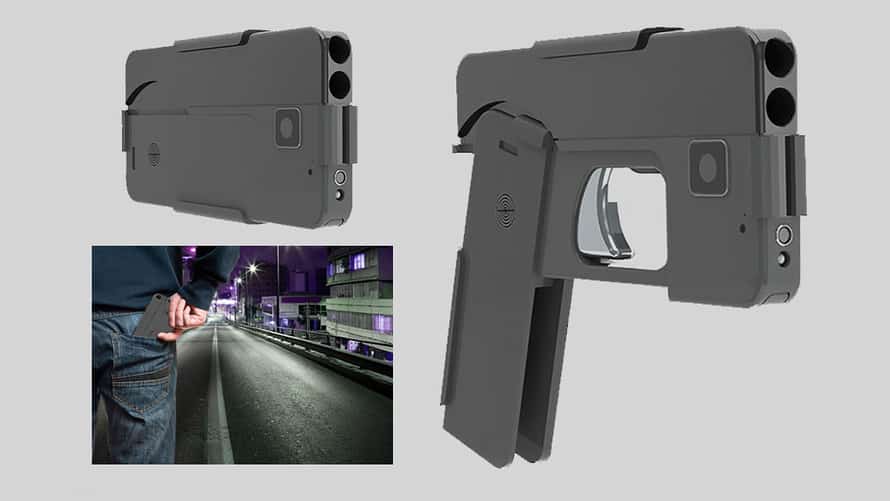 Below in a simple chart are the basic specifications and features of the Ideal Conceal Cellphone Pistol that I discovered, with input from Mr. Kjellberg. Mr. Kjellberg explained the Two-Gear firing mechanism to me and sent me some videos. See below links. He said as the “trigger is pulled, the gears rotate one turn which leaves a flat spot to hit one firing pin while the other firing pin lands in a hole. The next trigger pull rotates the gears again reversing which pin is hit by the hammer.” 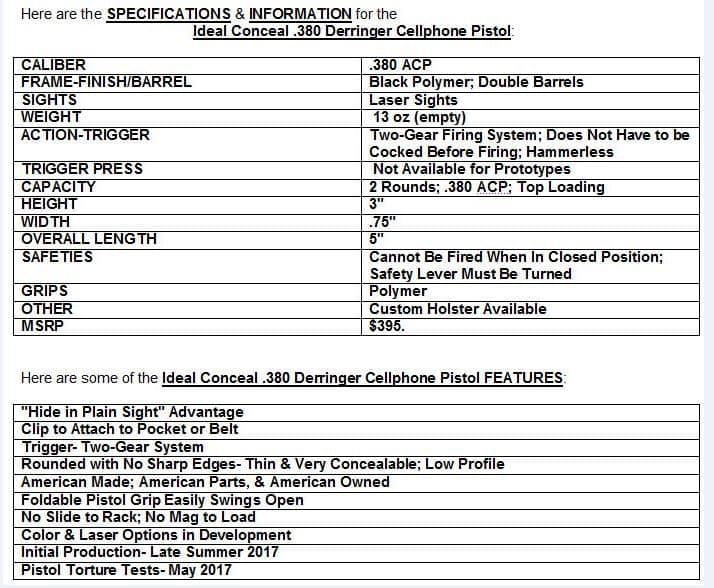 Here is a nice video overview of the Ideal Conceal Cellphone pistol:

As with any new innovation and with concealed carry weapons in general, there will be and have been concerns expressed. One television analyst said that my biggest concern is “someone having this at home sitting on a coffee table.” He said a child could pick it up thinking it is a cellphone and then they would have a weapon in their hands. Another said this gun will only add to what law enforcement and TSA agents look for when checking people for weapons. A gun violence coalition spokesperson said the gun is not only dangerous, but it is irresponsible.

Well, one cannot help but recognize and explain that having a personal defense weapon carries a lot of responsibilities for folks. Of course, those with weapons must be properly trained, understand the applicable laws, rules, and responsibilities, and practice accepted handling and shooting techniques and procedures for guns. Without a doubt and without hesitation, all handgun safety rules must always be followed, including keeping all weapons and ammo locked up, properly stored, secure, and safe from inquisitive hands of young children and from unauthorized people of all ages. And the proper handling and using of guns and weapons must be emphasized. Weapons are but tools in the hands of individuals, who can and do respond differently with all types of tools, whether they are kitchen meat-carving knives, a baseball bat, or a pair of scissors.

Our Second Amendment right to keep and bear arms for our personal protection must be understood, respected, and practiced in a safe manner for all weapons. What are your thoughts? Do you think this gun design and model is any more or less dangerous or responsible/irresponsible than any other weapon? What are your ideas about its pros and cons. Would you buy it?

Be Safe and “Carry” on friends!