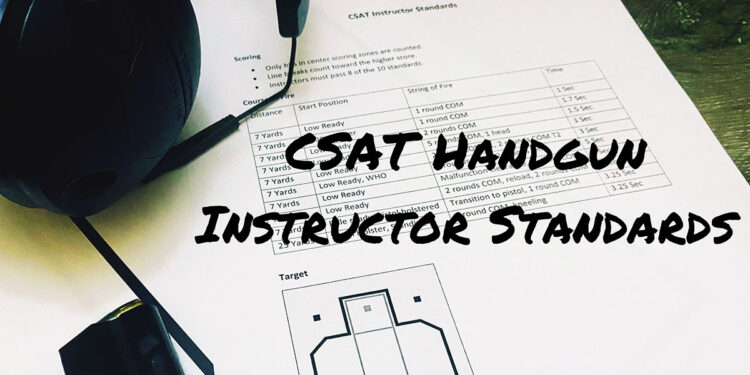 About three hours southeast of Dallas in Nacogdoches, TX, is a place called Combat Shooting and Tactics (CSAT) run by Paul Howe. If you are not familiar with who Paul Howe is, he is a real deal been there and done that guy who came out of Special Operations and started up a training business in the early 2000s. If you google search his name, you will find a few books, a handful of YouTube videos, and a couple of Panteo videos that feature Paul Howe. He has been in the training business for quite some time and has a reputation as a well-respected trainer.

Among the classes that he teaches are handgun and carbine instructor classes. Even though all the cool guys are doing carbine stuff these days, we are going to focus on the handgun instructor class and the shooting standards that students in that class have to pass to graduate. This is a quick course of fire, consisting of 10 strings of fire. Each string of fire is treated like a pass/fail event. To pass the instructor course, students have to pass 8 of the ten strings of fire.

All but one of the strings of fire are at the 7-yard line. The remaining string of fire is a single round from the 25-yard line. This weights the course of fire pretty heavily on closer range shooting skills. There are 25 total rounds fired in the course, and only one is fired somewhere other than the 7-yard line.

Alternatively, if someone couldn’t source a USPSA target, using scoring zones that are similar in size would also work. The strings of fire are scored all or nothing. All rounds fired have to hit the primary scoring zone, or they are counted as misses. This means that from a practical standpoint, a target that is the same size as the primary scoring zone would suffice in a pinch. A printable USPSA A-zone target is available HERE, and a 3″ x5″ index card would be close enough for the required headshot. I don’t always have USPSA targets sitting around, so this is what I have done many times.

The most difficult string of fire, at least to me, is the 25-yard string. A 3.25-second draw, with a move to kneeling and then a good shot on a USPSA A-zone size target, is fairly tight from 25 yards. The other strings of fire have more generous time standards.

The course of fire is very comprehensive. It is not leaving much untested. The only thing I would like to see more of is the draw stroke. It’s a pretty safe bet that if we are going to use a handgun to defend ourselves, we will likely have to pull it out of a holster first. Only three strings require a draw, though. Adding the draw to a couple more strings I think, would be a good modification.

As far as a qualification goes, I would give this one an A-. It is easy to shoot, quick and is logistically easy to pull off. It would even be pretty easy to shoot most of this course on an indoor range with only a couple of modifications.

Give it a try, and let us know how it goes in the comments.