Dealing with Fear, Part One: Living in the Moment

by Sean Holt
in Articles, Self-Defense
0 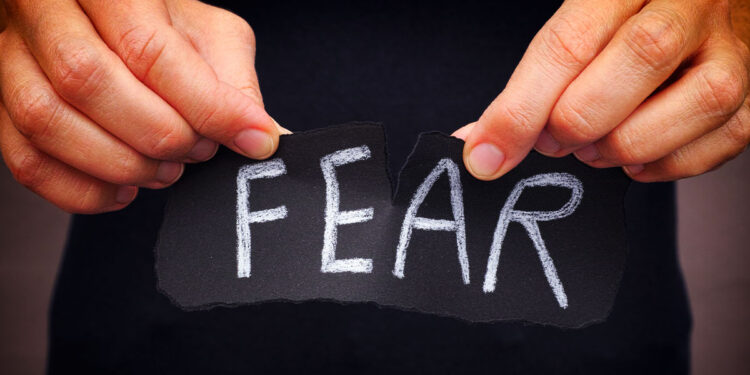 “I must not fear.

Fear is the mind-killer.

Fear is the little-death that brings total obliteration.

I will face my fear.

I will permit it to pass over me and through me.

And when it has gone past I will turn the inner eye to see its path.

Where the fear has gone there will be nothing. Only I will remain.”

The Litany Against Fear, from Dune by Frank Herbert

Whether you enjoy literary science fiction or not, Dune‘s Litany contains some profound wisdom for self-defense. Fear, while a valid emotion in many contexts, can be paralyzing when action is required and disorienting when you need a clear head. However, coping with fear is not a matter of simply denying it; we have to cope. This is the first of a two-part series. Here we’ll talk about how to deal with fear before and during a self-defense situation. In the second part, we’ll look at how to avoid paranoia, in which fear takes over your life.

Fear is interesting. Rooted in the deepest part of our brains, it acts on levels that science still doesn’t fully understand. Every warrior culture throughout history has developed its own ways of controlling the fear they experience. And it takes effort to control—the chemicals released as part of the fight or flight response cause increased heart rate, increasing blood flow to major muscle groups, and otherwise preparing the body for either combat or a speedy exit. Hence “fight or flight response.”

This is part of the problem. Our brains can’t tell the difference between real threats—the tiger in the trees or the maniacs with a knife—and anxiety over thinking about them. So we run into my first point: while planning for self-defense, personal protection, and home security is important, it should be comforting rather than anxiety-inducing. We’re here to talk about risks, threats, and safety in a productive way, and adopting a self-defense-oriented lifestyle should be comforting, not crippling. If you find yourself getting overly anxious, take a break for a while and come back to it.

So be honest in your risk assessment. Don’t go looking for things to be afraid of, and don’t let your emotions drive the bus. Use your rational mind to evaluate what you’re up against, and plan for the most likely contingencies.

Speaking of preparation, fear also informs training, on a couple of levels. Firstly, you can’t be afraid to train. Training is going to hurt a bit. You might fall on your face a few times, metaphorically or physically. You might step way out of your comfort zones. All that can induce fear or at least anxiety, and you need to keep going anyway. Sometimes the way out is through.

Now for the ugly part: what do you do when things get far too real?

When an emergency strikes, you’ll likely be taken by surprise—that’s what makes it an emergency. You’ll already be behind the curve, reactive rather than proactive. Whether it’s a medical emergency or an assault, you’ll have to execute the same basic response: realizing and understanding the situation, selecting an appropriate course of action, and executing it in a timely manner. So how can you prepare to do that?

Training helps counteract, if not actually minimize, fear. By running through various drills or scenarios over and over, your skills become reflex. Thus, when the time comes and your higher brain functions are struggling to catch up, your hands and feet will already be in motion. They’re not kidding when they say that the first stage is denial; everyone I’ve ever talked to who has survived a force-on-force encounter has said that at first, it seemed surreal. This simply couldn’t be happening to them. After that the fear flooded in, further complicating their response.

Visualization also plays an important role. Just by thinking through various emergencies—a mugging, a carjacking, a house fire—and running various (realistic) plans in your mind, you can go a long way toward developing the approaches and mindset that you need.

With both practice/training and visualization, don’t get hung up on the “fun” stuff. Focus on your weaknesses, and don’t neglect the more mundane skills like first aid.

In conclusion, I’ll point out a running theme through all stages of this: part of coping with fear is acknowledging that it exists and that it exists in response to a world that isn’t as it should be. Bad things are going to happen. You may have to deal with them. And when you do, fear will be one of the factors you’ll have to cope with. Start planning on that now.