Most concealed carriers need a small deep-concealment gun on occasion. Here we look at three different firearms platforms and compare them in terms of concealability, reliability, and performance. 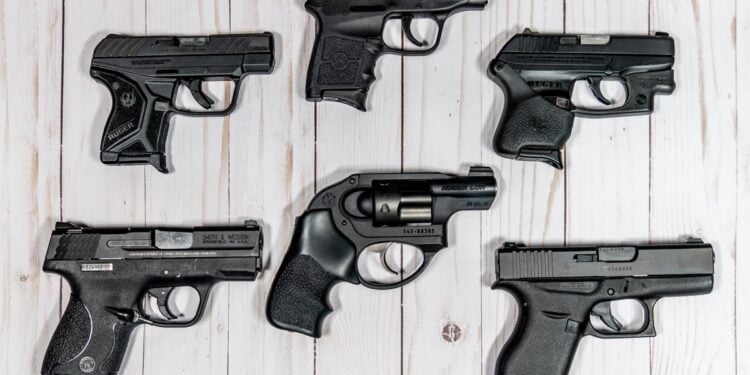 I’ve carried a concealed handgun my entire adult life. I have concluded that most of us will need to rely on a very small and concealable gun more often than we would like. Some people in the shooting community that proclaim to never carry anything less than a service size pistol. And a reload. People who claim always to carry a full-size gun are either living a rather unique lifestyle in which entering less permissive environments or working in professional settings is never required of them. Or they are lying. I advocate carrying a serious gun. But when you can’t manage that due to circumstance, carrying a small gun is better than not being armed. Therefore, a small, concealable, go-to option should be in the carry arsenal for most of us.

Here we will consider some possible solutions for your deep concealment needs. We also compare to one another in terms of concealability:

We now live in the golden age of small and concealable handguns. If you need something truly small, you are no longer stuck with only the tiny 22 caliber rimfire or 25 ACP mouse guns, or a two-shot derringer, as at one time were the only options. The truth is, you can carry something that is reasonably capable despite being small enough to conceal in almost any mode of dress or in any environment. Depending on your needs, you can choose from the new crop of single-stack 9mm autos, the small and ultra-light revolvers, or the truly tiny 380 pocket autos. Even the smallest of these options are entirely superior to going unarmed. And these small pocket autos chambered in 380 ACP are rather formidable.

I have nothing against very small guns like the tiny 22 rimfire mini revolvers or the small rimfire autos. However, I think there is no reason for most people to go smaller than a small 380 pistol. Guns such as the Ruger LCP II and Smith and Wesson Bodyguard epitomize this class of firearm, and they are so small that they can be concealed under almost any conditions. These guns also provide a significant advantage in power over the miniature rimfires and the like. If you need true deep concealment these guns may prove a viable option. Especially if you need to carry the gun actually in a pocket with no signs of printing,

Be Sure to Test

A lot of people have success with the small 380s. But I encourage you to truly test and validate the reliability of such a gun. The diminutive size of such autos creates an inherently more finicky platform. And when you combine this with the harsh conditions of a pocket, reliability can suffer. The small 380s are also challenging to shoot well. The reduced platform makes it harder to handle and manipulate. And even though 380 ACP is a comparatively mild round, it can pack a punch in such a small package. This can make recoil a concern. If absolute discretion is needed and you’d rather, this category of firearm is probably your best bet. I submit that the small 380 auto is the very smallest, yet still viable, defensive firearm to consider for concealed carry currently.

The next step up in size, and arguably power and reliability, is to use a small frame, lightweight, revolver. Small-frame revolvers have given away a great deal of market share to the popular 380 autos. But they remain relevant as concealed carry guns. They still remain a top choice among experienced gun carriers for deep concealment. They provide the power of a service cartridge in a package that you can conceal in almost any attire. Small carry revolvers, as epitomized by the Smith and Wesson J Frames and the Ruger LCRs, are indeed larger than the small 380 pocket guns. However, due to the round and organic shape of the revolver, they lend themselves well to concealment on the body to the point that comparative autos tend to be harder to carry without printing.

I will say that I am not at all a revolver enthusiast. If deep concealment were never a concern for me I would never carry anything less than a double-stack 9mm autoloader. However, due to my lifestyle and concealment needs I often need to rely on a small compromise gun. For myself, the small revolver strikes the best balance of power, concealability, and reliability. I find that the small J Frames or LCRs conceal significantly easier in a pocket or under tucked-in clothing than do even the smallest single-stack guns chambered for 9mm. Many people complain about the width of the revolver cylinder. But the rounded shape of the gun along with the fact that the rest of the gun tends to be thinner than even the smallest autos makes the revolver disappear under clothing in a way not much else can rival.

The new generation of single-stack 9mm autoloaders are truly the hot ticket sales items in the concealed carry market. This class of handgun is epitomized by the Smith and Wesson Shield and the Glock 43, though there are many other good ones. There is a good reason for their popularity. These guns prove quite small and concealable. They are substantially more shootable for most people than either small revolvers or the small pocket autos. The potential downside is that the single-stack auto can be more challenging to conceal deeply than the firearms mentioned above. Therefore, how should the individual weigh these considerations?

Can you adequately hide a single-stack 9mm in your deep concealment mode of carry? Then, by all means, go with this option over a small pocket auto or a small revolver. These autos typically carry more ammunition on board than do small revolvers or small 380s. They ca be easier to shoot and faster to reload. Some of them are also chambered in a more effective round. Although they can be thin, the blocky shape may prove challenging to hide in deep concealment under tucked in clothing. They can also be challenging for pocket carry. If you can do it, however, these guns prove an excellent option for your deep concealment needs. But if they prove too large, step down to a small revolver or pocket auto.

Tactica IWB Holster Review – A Holster Made for Women

Not Every Manual Safety Is Created Equal

Not Every Manual Safety Is Created Equal