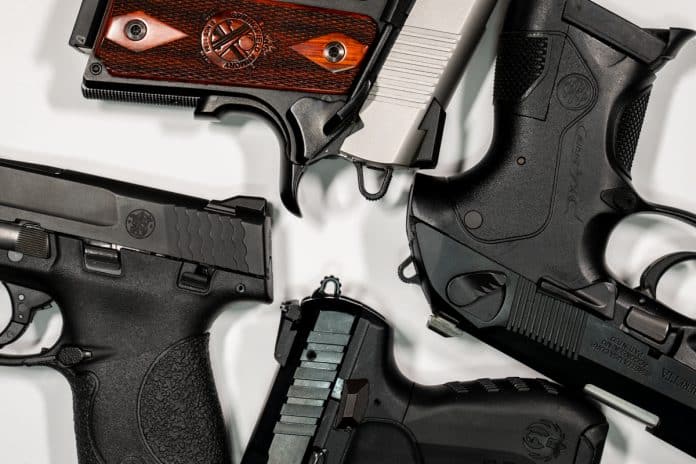 Some people insist on using a manual safety, and others say that you should never use one.

By now, enough information is out there that a manual safety is perfectly viable to carry with. It’s no great secret that the older single-action platforms like the 1911 or Browning Hi-Power are perfectly capable so long as a person trains to deactivate the safety as part of the draw and presentation. It’s also known that manual safety devices have saved the lives of police officers whose weapons were taken by suspects they were fighting with.

Some manual safeties are practical enough to be used, but others aren’t. In all cases, training with the safety is of paramount importance.

Look At The Manual Safety In Question

So, you’ve decided to carry with a manual safety. You need to choose the right gun with the correct manual safety for it to be viable. Otherwise, you need to invest in training and gear so that you’re comfortable with using the gun without it.

Granted, with many pistols it’s unnecessary to have one. In fact, only single-action pistols really require the use of one. A quality holster for carrying and a safe in the home will keep the pistol secured. Modern pistols have passive safety features such as firing pin blocks that prevent a drop fire from happening.

So long as you keep the gun secure on your person or in a safe…you’re fine. If someone accessing the gun is a legitimate concern while carrying – such as if you open carry instead of concealing or carry as part of your job – get an active retention holster.

With that said, you need to look at the manual safety on the gun in question. What you’re looking for are two specific attributes.

The first thing to look for is the location. Is the safety located where you can easily access it, preferably with the thumb of the shooting hand? Can it be manipulated one-handed? Does your shooting-hand thumb find it easily?

One of the criticisms of the safety on Beretta pistols is that some people may not be able to easily access it with one hand. This can cause issues when drawing the pistol and manipulating the safety into fire mode. For others with small hands. this may require a two-handed operation of a 92, M9 or PX4 or other slide-mounted safety. While perfectly viable in training, something to be aware of is that you might not have both hands available in a fight.

Then you need to evaluate the safety lever itself. How big is the safety? Are we talking about a tactical or competition-style lever? Or a tiny little tab? And how easy is it to manipulate?

For instance, this is the safety lever of a Smith and Wesson M&P full-size.

Note that it’s kind of big! You can easily access it due to its location, so it is perfectly viable.

Here is the safety on a Smith and Wesson Bodyguard 380 and M&P9 Shield.

Notice how small it is. I’ve used the safety on a few Shield pistols, and while they do work reasonably well the issue is that they don’t stick out far enough to be easily manipulated. Your thumb could easily miss it or not get a good grip on it. The same can be said for low-profile safety levers on other makes and model of pistols like some Rugers, S&Ws and other guns with a similar tiny safety lever.

The safety on a 1911 pistol is located in a naturally-accessed location, as your thumb is just underneath it when you grip the pistol. You can naturally activate it by sweeping the thumb up and deactivate by sweeping down. While there are plenty of pistols that don’t require one, the 1911 platform does as it’s a single-action pistol…but John Browning, to his eternal credit, knew what he was doing when he designed it.

So, as you can see, it’s not so much that manual safeties are bad…it’s more that some are designed to be usable and others are really more designed to give people comfort when they should be investing in training or some decent equipment. As it happens, a decent holster and even a common lockbox aren’t terribly hard to come by nor expensive.