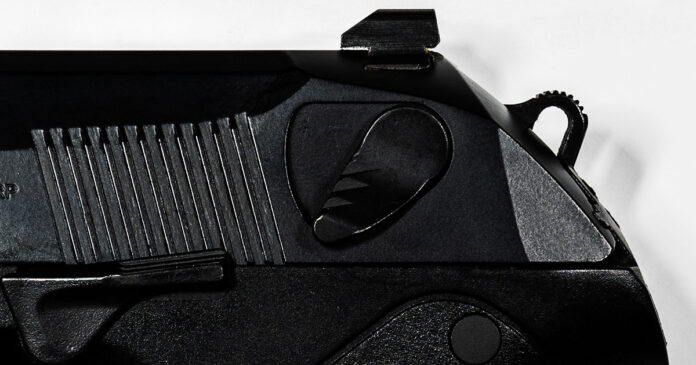 A certain number of high-profile shooters and instructors have been showing off double-action pistols as their EDC, which is starting to spill over into normal people’s choice of carry gun, and especially for those who appendix carry?

There’s something to it. Double-action pistols have certain advantages over a striker-fired pistol in the appendix position, and certainly over single-action guns for…carrying them at all, and more on that in a moment.

While this won’t (regrettably) likely lead to a resurrection of the three- and four-digit Smiths…it’s downright logical.

Why A Double-Action Pistol For Appendix Carry?

The primary advantage that a traditional double-action/single-action pistol has over modern poly-striker pistols is positive control of the firing mechanism.

Outside of the CZ-75 manual safety models, most DA/SA guns have a decocker or a decocking safety. This allows the operator to de-tension the firing system, which serves as a natural deterrent to accidental discharge.

You can’t get Glock leg with a DA gun…or at least it’s a heck of a lot harder for it to happen.

That gives you positive control over the firing mechanism, which you do not have with any striker-fired gun except for manual safety models such as the Sig M17/M18 and S&W M&P pistols with manual safeties. After decocking, you can also put your thumb on the hammer as you reholster.

And that’s also literally the reason why the Glock Gadget was invented!

Putting The Hammer Down

Ultimately, this is silly gun person stuff; you can carry safely in the appendix carry position with any pistol so long as you are diligent and careful. A decocked DA pistol merely adds an extra layer of safety rather than making the practice any more or less safe.

A person can either carry and handle a gun safely, or they cannot. If you can’t, you need to get more training so you can, or you need to not have guns.

It’s also the case that you have to commit to the DA trigger. While it’s hardly rocket surgery, some shooters have problems with it for a variety of reasons.

Too long a trigger reach for good placement of the finger on the trigger (which was partially why the FBI ditched the 1046 back in the day) can make the DA pull harder if not impossible for some shooters. Shooters with a chronic recoil anticipation flinch will also find DA pistols unforgiving.