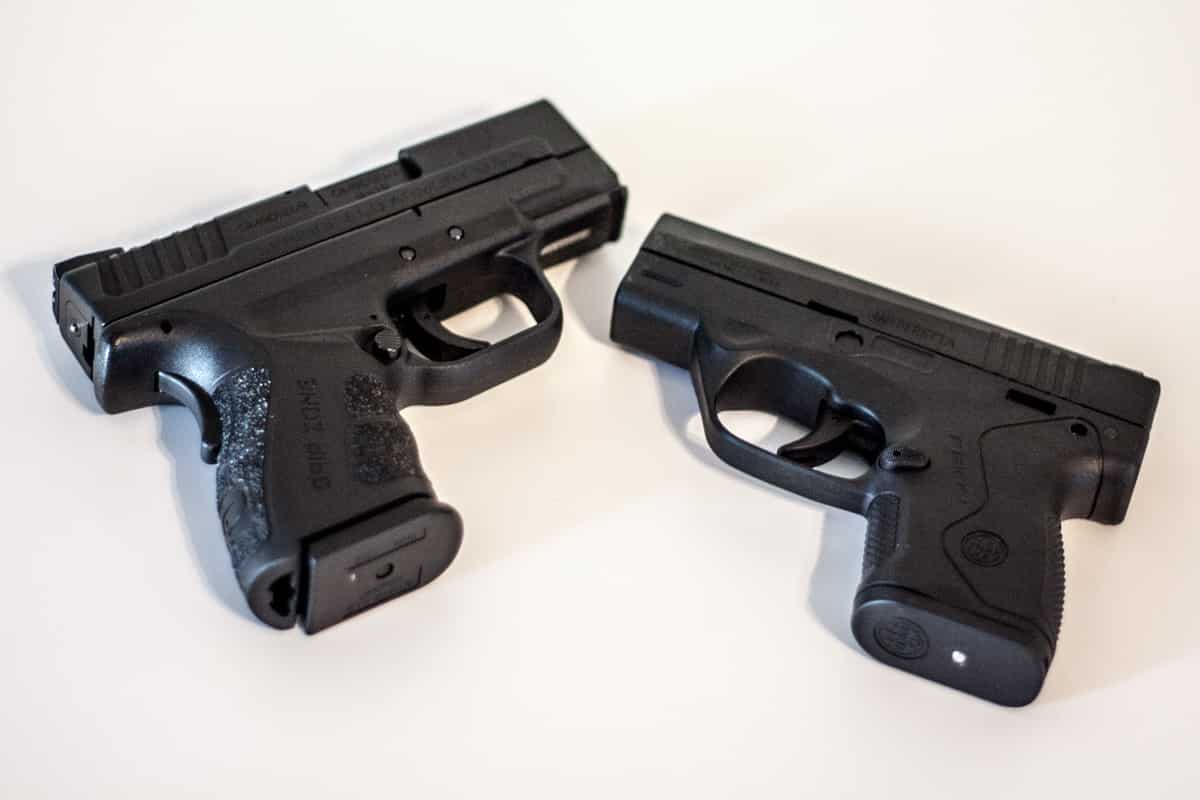 The old adage goes, “the only way to stop a bad guy with a gun is have a good guy with a gun.” Whether you’re a concealed or open carrier, you’ve probably debated with yourself about the various nuances of which gun that will be. Some people choose one gun and stick with it through thick and thin. Other people swear by using a different gun based upon how they’re feeling that day, what they expect to be up against, or just what feels clever.

In this article, we’re going to leverage the best of what we see as good characteristics from both single stack and double stack pistols to see how they match up against each other. We’ll be using some live examples of guns that are out on the market — because why discuss it if you can’t provide an example?

Read through and see if we hit our marks and then throw your two cents in the comments section below.

Single stack pistols are generally slimmer and more compact than their double stack counterparts. For those wearing warmer weather clothing, the convenience and ease of a single stack often makes it a great choice.

The new Walther PPS M2, available in either 9mm or .40 S&W, has a barrel length of 3.18″ and a width of only 1″. When chambered in .40 S&W, it handles recoil extremely well — which helps for follow up shots and tight, controlled shot groups.

One of the biggest downsides of switching to a single stack pistol is usually a greatly reduced magazine capacity. The Glock 43 only holds 6 rounds — an uncomfortable number for someone worried about combat viability. For those who have significant time on the range, six rounds goes by extremely fast. In a self defense situation, a big concern for concealed carriers is having enough rounds to neutralize the threat.

The FNS-9C is a very compact, slim line single stack double-action only (DAO) pistol that can hold up to 17 rounds. This makes it a perfect choice for those who love the 9x19mm round.

3. Whatever caliber you want, it’s available in a single stack pistol

The Springfield XD-S chambered in .45 ACP is available in a single stack model with a 3.3″ barrel.  This makes it an ideal choice where size matters and performance is required. Even though it only has a 5 round capacity in its standard magazine, its shooting ergonomics, grip features, and history of performance is good enough to make it an excellent choice when you demand .45 ACP in a single stack form factor.

No one wants to be placed into a defensive gun use scenario. But, if the time comes and you’re placed in the hot seat, you probably want to have a pistol that is designed from top to bottom to handle a combat scenario. The Glock 26 is often hailed as a crowd favorite amongst former inner-city law enforcement because it is so extremely easy to shoot well. At distances of up to 30 yards, this pistol can put rounds precisely on the bulls eye.

2. Don’t have to sacrifice capacity for caliber

If you are someone who demands a high caliber round for your everyday carry pistol, you’re probably used to dealing with single stack competitors that try to cram in as many rounds as possible into a magazine that simply can’t handle it. A great example of this, sadly, is the Glock 36. It definitely handles recoil exceedingly well but the magazine only holds six rounds. That’s little better than a revolver.

With the Springfield XD Mod 2 3.3″ Sub-compact .45 ACP, you’re not worried about magazine capacity when chambered in .45 ACP. It has magazines which can hold up to 13 rounds of .45 Auto, making theXD Mod 2 3.3″ both a viable concealed carry and everyday open carry option.

Full size double stack pistols were designed for gritty, down-in-the-mud self defense. Ideal for home defense as well as everyday carry, pistols like the FNS-40 are highly sought after for their reliable performance under extremely stressful situations. Hailed by both military and law enforcement as a no-nonsense gun with all the ergonomic features and performance you’d expect out of a combat pistol, it’s guns like these that keep us both entertained at the range and feeling confident in hairy situations.

What do you prefer? Single Stack or Double Stack?