The Element of Surprise: Understanding your Greatest Defensive Weapon 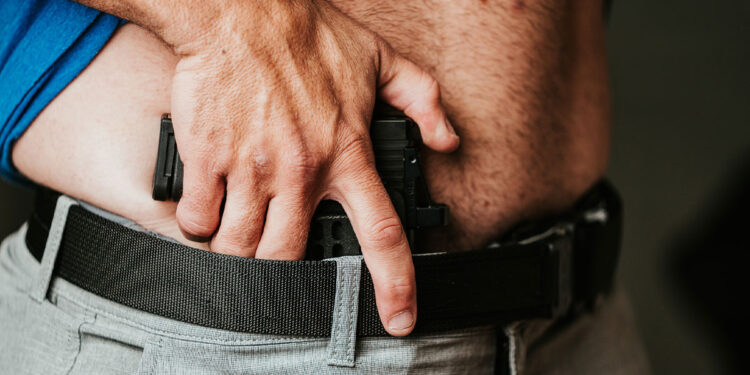 In the study of self-defense and interpersonal violence, it is easy to get lulled into playing the numbers; statistics on what “usually” happens have become more prominent with the circulation of surveillance camera footage. Personally, I consider these averages useful, but I don’t base all of my decisions on them. Getting into a situation where lethal force is needed for self-preservation is, in itself, not the usual on any given day. Statistics clearly show that a civilian self-defender is not going to reload their gun; I still carry a reload every day. Statistics show that the goblins run away as soon as shots are fired; I still train on the assumption that threats will need to be neutralized through ballistic incapacitation. And so on. While such trends serve as an important guide, I don’t believe in basing decisions only on these trends.

One trend that is universal, however, to the point of being truly consistent, is that criminals are taken by surprise when victims fight back. Criminals anticipate compliance from victims who are taken off guard and overwhelmed with a show of force. This is what they predict, every time they commit a crime. If they anticipated resistance they would not pick that particular victim. Most violent criminal actors who are deranged enough to commit armed robbery by putting a weapon in another person’s face have done so many times. Some have done so hundreds, or even thousands, of times. Every single time they have done so they have encountered the same thing; compliant victims. Never have they encountered a resisting victim that decides to retaliate with lethal force. If the criminal who is now holding you up had ever encountered someone who fought back with lethal force in the past, would they be standing before you now? Resistance is something that the violent criminal actor has not seen.

Normalcy bias is defined as “a cognitive bias which leads people to disbelieve or minimize threat warnings.” This concept is discussed to a great extent among self-defense practitioners and it is considered a liability in the mindset. The tendency for people to try and interpret threatening environmental cues as normal is very common among victims of violence. You have heard it before: “When I heard the gunfire I thought it was fireworks, so I did not leave.” Or, “I did not like the looks of that guy, but I did not want to be rude, so I got in the elevator with him anyway.” That is normalcy bias. The average person does not witness violence frequently, so anything that seems to pose such an anomaly in their environment is reasoned away as being normal.

Criminals also have a normalcy bias, and just as innocent people struggle to break out of this syndrome, so do criminals. What is the criminal normalcy bias? For the violent armed robber, rapist, or other miscreant, “normal” is a compliant victim who offers no resistance. This bias on the part of the criminal actor is a tremendous asset to the self-defender. The criminal who commences with armed robbery or assault of some kind is not, in any way, anticipating resistance. When you, the victim, resist with a lethal force response, the criminal starts thinking a familiar thought process: “this can’t be happening.” He has never seen it happen in the commission of previous crimes, so it will take him a moment to wrap his head around what is taking place. Within that brief moment, the goal is to neutralize him or escape the situation.

The Advantage of Concealment

So, we have discussed the reality of criminal normalcy bias and how that offers an opportunity for the self-defender to exploit. A second advantage that the defender has is the concealment of weaponry. While open carry serves certain purposes for certain people, and I am not necessarily opposed to open carry, it is concealed carry that capitalizes on the element of surprise. A well-concealed handgun offers no trace of its presence to the criminal element, and the criminal actor has no idea that you have it. This advantage, offered only by concealed carry, is enormous. Depending on the circumstances, the fact that the concealed weapon is unknown to the attacker is as great an advantage as the ballistic power of the weapon itself.

When we combine the fact that the criminal actor is anticipating a compliant and non-resisting victim with the concealed carry of a defensive weapon, we have an opportunity that will usually present itself. Finding the opportunity, however, is up to the defender. No matter how fast your draw stroke, you can’t beat a drawn gun if a criminal has you at gunpoint at close range. However, when analyzing the nature of most armed robberies and other crimes, the criminal actor will usually turn his attention elsewhere, at least briefly. When looking down at the cash register, when looking for encroaching witnesses or law enforcement, etc…, A well-trained draw stroke, combined with immediate lateral movement, is an action on the part of the defender that the criminal does not at all anticipate. When seeing such an action, most likely for the first time, the criminal gets stuck in his own analysis paralysis as he tries to make sense of what is happening. Capitalize on this.

Just as the majority of good people have a hard time breaking out of the freeze and acting quickly against an unexpected attack, criminals also have a hard time dealing with what is out of the ordinary. An immediate force response from an intended victim is not expected, it is a surprise, and it is your greatest asset if dealing with criminal violence.

Helping Your Work Plan For An Active Shooting Event

Helping Your Work Plan For An Active Shooting Event