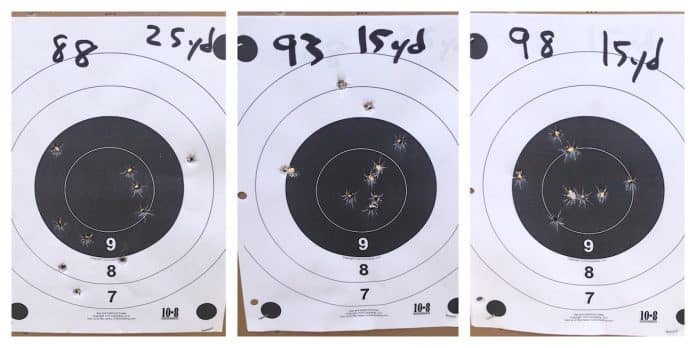 It is my understanding that once a year FBI firearms instructors have to shoot the bullseye course and score at least 260 out of a possible 300 points unless someone decides to shoot it one-handed, then they have to score a 240. This course of fire is also used in the FBI’s firearms instructor courses and must be passed to graduate from the course. The target used is the FBI’s own FBI-IP 1 target. As a stand-in, you can use 10-8’s bullseye target which is supposed to be the same size as the FBI’s target, or you can use an NRA B-8 repair center, but the scoring rings are sized a bit differently.

Bullseye courses are not that common in the defensive shooting community, and I think that contributes to a general lack of pure marksmanship ability in defensive shooters. The FBI bullseye course serves as an excellent exercise to build pure marksmanship with virtually no time pressure for the 25-yard string and lax but still there time pressure on the 15-yard strings.

The course of fire consists of three “stages” and requires 30 rounds to complete. Stage 1 is shot from 25 yards, is a total of 10 rounds fired, and has a 4 minute par time with a reload after the first five rounds. That averages out to about 24 seconds per round fired, not calculating in the 2-3 seconds for the actual reloading.

The key here is to go slow, take breaks between shots, and when it comes to the actual shooting, use as much focus as you can muster. I am so used to shooting under time pressure that slowing down that much gets really difficult. If you are an experienced shooter with a good handle on fundamentals, this should be doable shooting. Maybe not perfect score doable, but at least 80 of the possible 100 points for this stage. Newer shooters may struggle a bit, but that is okay. Just keep after it.

Stage 2 is from 15 yards and consists of two strings of fire of 5 rounds each with a 15 second PAR time per string. This still isn’t “fast” shooting, but in a perfect world all rounds fired from 15 yards would land inside the ten ring. In my experience, the 15-yard strings are a bit trickier than the 25-yard string because even though the PAR time is generous, the temptation is to go faster than you actually need to. Having a sense of pace here is essential.

Stage three is mostly a repeat of stage 2 but uses a 10 second PAR time. Even though 2 seconds per round is not fast, gripping the gun well and getting the sights to return quickly starts to come into play a bit. The quicker the gun and sights return to target, the more time we have actually to manipulate the trigger and hopefully get a better trigger press and better hits.

Given the high accuracy demand of the drill, knowing the specific POA/POI relationship between your gun and your ammunition will be vital. Just a couple inches off can cost significant points. It is not an easy drill, but is an excellent test of pure marksmanship skill, and has the credibility associated with being a part of the FBI’s firearms instructor qualification process. Give it a try and let us know how you do in the comments.