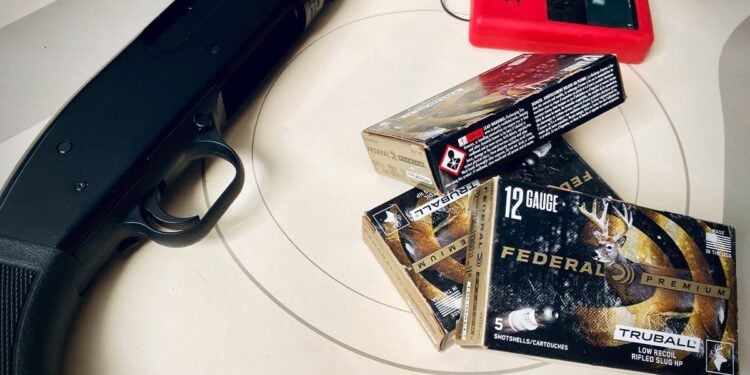 The shotgun qualification is pretty straightforward. It calls for 15 slugs, has 7 strings of fire from 7 yards to 50 yards, and is shot on a regular FBI QIT. Not many people are running around with FBI qualification targets in their range bag, so an IDPA target or USPSA target would likely be an acceptable stand-in. I used an IALEFI target, which has the same bottle shape as the FBI QIT.

The guns I used to try this thing out included a bead-sighted Maverick 88 with an 18.5” barrel. This is about as basic of a shotgun as you can get. I stuffed it with Herters 1oz slugs clocking 1600fps. If the qualification can be passed with this shotgun and ammo, it can be passed with any shotgun that isn’t broken and slugs that make it 50 yards downrange.

The first string of fire is from 50 yards. Load two rounds into the magazine tube, standby at what the FBI calls “Position 5”. As I understand it, this is basically a high ready position. On the start signal, cycle the action and fire one round standing, then one round kneeling. The par time for the string is 20 seconds.

A note for the 50-yard string. It might be a good idea to learn from my mistake and check the zero of your shotgun from 50 yards with the slugs you plan to use on the course of fire. The Mav 88 I was using was new to me as a gun, and I neglected to check zero before starting. Consequently, I hit just over the left shoulder of the bottle on the IALEFI A target I was using.

From the 25-yard line, the course of fire actually calls for starting with an empty gun, with the action open. On the start signal, 5 rounds are loaded into the gun, and then engage the target with 3 rounds from standing and 2 rounds from kneeling. All in a blistering 45 seconds (sarcasm detected).

From the 25-yard line, we move up 10 yards to the 15-yard line. A quick side note here. The qualification calls for slugs all the way through, but as we get closer to the target, using buckshot, I think would have value, especially if it is the same buckshot that we plan to use in the shotgun for home defense. It helps us stay accustomed to our load’s pattern performance at the distances we are more likely to use the gun. I stuck with the slugs for my first run through the qual, but when I ran the qual a second time with a different gun, I switched to buckshot at a 15-yard line.

From 15 yards, we start again with an unloaded gun and action open. On the start signal, the shooter loads two rounds, fires two rounds, loads two more rounds, and then fires those two. A total of 4 rounds fired in 35 seconds. This time standard should allow for ammunition to be loaded from anywhere on the shooter. If the shotgun does not have a side saddle and the shooter is loading from pockets, these time standards will allow that.

The course of fire wraps up at the 7-yard line. Start with the gun empty, action open. On the start signal, load 4 rounds and fire 1 round in 20 seconds. Once complete, go to a low ready position. The next three strings of fire are 1 round presentations from low ready in 3 seconds.

We can miss with 3 rounds and still pass. If you do the math, that is 80 percent. Pretty standard for law enforcement qualification scoring. However, I think a 100% score should not be too difficult to attain, given a little practice.

I appreciate the apparent emphasis on loading built into the qualification. We are loading an empty gun, on the clock, for 3 of the 7 strings of fire. While loading a shotgun from empty is not something I see as likely, the skill transitions to just keeping the gun loaded while in use. Even though the time standards are not tight, even a little time pressure has value in exposing weaknesses.

The low round count is also welcome in today’s environment. Slugs (and buckshot) are about $1.50 per round right now, depending on how well we shop around. I really don’t want to have to spend $50.00 in ammo just to shoot a qualification. This one should allow us to get a skill check at about half that price.

What the Qualification Doesn’t Do

Qualifications are not a good place to develop skills. It is important for people to understand that. A qualification course is a check of acquired skill, not where skill is built. The usefulness of the qualification is that it is a known standard and serves as a comparison tool of our own skill to others. Just in case our skill level is ever called into question, the fact that it belongs to a national law enforcement organization is also helpful.

Contractor Shoots Man Charging at Him Inside Restaurant