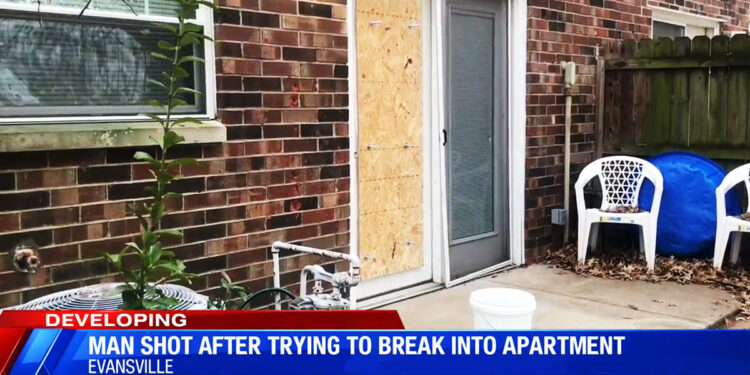 This must have been a huge scare for an Indiana woman and her three children this past weekend. Luckily, her fiancé was home and ready to defend his family.

Around 3 PM this past Sunday, an armed man started beating on the doors and windows of a home currently occupied by a woman, her fiancé, and three children. The fiancé was upstairs when the disturbance started. The crazed suspect threatened to shoot the woman in the face after she told him to stop. That’s when he “locked the door, put my dog in the kennel, and ran.” Now, the door should have been locked already. And I hope she didn’t go outside of the house to tell the man to stop.

Then the fiancé armed himself and came downstairs. He ordered the man to stop, but that’s when he grabbed a shovel and started beating on the door. The armed resident shot once, hitting the suspect and ending the attack.

The police arrived on the scene and transported the suspect to a hospital to treat his gunshot and dog bite. He was then charged with attempted burglary, possession of a handgun without a license, and resisting law enforcement.

Bog bite. Resisting law enforcement. It sounds like he might have gotten the dogs sicked on him. I guess it didn’t end so well for him.

And who knows what prompted this attempted break-in. Was the suspect high on drugs? Was he there trying to get to someone that used to live there? Both? But this goes to show that things can hit the fan in an instant, even when you are in the comfort of your own home on a Sunday afternoon.