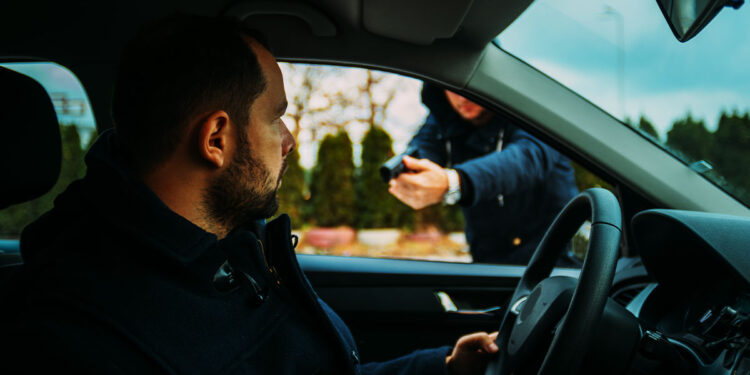 Carjacking is nothing new, it has been a common crime for a decade. Like much else in the world of crime, this particular offense goes through phases of popularity. Throughout the first two decades of the twenty-first century occurrences of carjacking fell, like most other crimes. Now, in the past two years, on the heels of the “defund the police” stupidity, carjackings have soared in popularity among the criminal element. Fittingly, the majority of these incidents happen in cities among the people who vote for politicians who work to defund the police, and then wonder why criminals are running amuck. Unfortunately for the rest of us, if we need to travel to such urban slums, we must consider this heightened threat.

Carjacking involves a criminal actor, or multiple criminal actors, taking a vehicle by force away from a person who is in, or just getting into or out of, the vehicle. Needless to say, most perpetrators are armed when committing this act and take the vehicle through intimidation with a weapon. A significant percentage of people who comply and hand over the keys end up getting killed anyway as carjacking tends to be the domain of a violent criminal element. How can you guard against this form of crime while on the road or while parking?

Awareness While in Parking Lots

Parking lots are the harbinger of an enormous percentage of crime as it is, not just carjacking. The first thing to consider for safety is general awareness when traversing a parking lot, whether leaving or returning to your vehicle. When pulling into a lot, be sure to look for suspicious characters who are loitering about, or sitting in parked cars and watching. Be sure not to park next to occupied vehicles, if possible, and if something looks wrong, leave. Upon parking, keep the engine running and doors locked for a moment, and be sure to visually scan the environment and ensure that nobody is approaching you. Carjacking is a quickly performed crime; criminals wish to take the keys, or the running car, quickly. If suspicious-looking characters approach your vehicle from the front, sides, or behind, just drive away and keep the vehicle moving. If all is clear, upon exiting your vehicle, don’t dither; walk to your destination and get out of the transitional space of the parking lot.

Upon leaving a vicinity and walking to your car, be sure to notice those around you, even those far off. As you walk to your vehicle be alert to someone who is stationary, locks eyes on you, then starts following you. If you see such behavior, turn around and go back into the establishment you came from to call authorities. For a carjacking to take place, the criminal element needs to get close to you, and typically do so when you are right near the vehicle. Thus, your time of heightened threat is when exiting or approaching the car. When approaching your own vehicle, inspect any adjacent cars. A bad sign is when a parking lot is relatively empty, with plenty of space, yet there is a vehicle parked directly next to yours. If the vehicle is a van or other type that does not allow you to clearly see into the car, approach with caution, or not at all. Criminals will sometimes hide within a parked vehicle and ambush their victim. When walking to your car at night use a powerful handheld light to illuminate dark spots.

A key to driving safely, not just for carjacking defense, but in general, is to leave enough space between you and the vehicle in front of you so that you can swerve and stay mobile, should something happen. On the highway in traffic, or stopped at lights, leave enough room between yourself and the vehicle in front so that you can pull out and drive away should you be approached by a criminal actor. Your vehicle is a several-thousand-pound-missile and it can be your best weapon if it is mobile. Escaping a dangerous situation within the vehicle is usually the best option if you can do so. Avoid getting boxed in. Consider this even when sitting in a fast-food drive-through line; leave space in front of you and keep the car running. If approached by a threat, drive over the curb if necessary; such driving that would never be acceptable under normal circumstances may be needed when facing violence. At all times, keep the doors locked, and when in dangerous areas, like inner-city neighborhoods, keep the windows rolled up.

If taken by surprise while exiting or entering your vehicle, or if stopped in traffic with no means to move the car, then you must consider your force options. A robbery at gunpoint, or by another deadly weapon, is a deadly force threat that typically justifies a lethal response. However, every circumstance is different. For example, if caught off guard, looking up, you have a gun in your face and a guy demands your keys, upon handing the keys over, he just turns away from you and gets in your car, what would you do? If nobody else is in the car, would you let him take it? I would. I am not inclined to kill a criminal who is no longer an active threat to me over just a vehicle. However, if family members are in the car, that is different. Even shooting the carjacker in the back as he gets in the vehicle is justified self-defense if you have loved ones still in the car. Therefore, the decision to use force or not is situationally dependent.

If taken at gun point by someone demanding your keys while you have loved ones in the car, I suggest not handing the keys over as the assailant might kill you, then have your loved ones. Rather, feign compliance, produce the keys, then throw them far in the opposite direction of your car. The time it takes the assailant to process what you just did can buy you the time to move, draw, and shoot. Even if unarmed, you can’t give your keys to the guy if loved ones are in the car. Rather, throw them and run. It is unlikely he will spend time searching the ground for the keys to the car and most people overestimate the marksmanship abilities of thugs. Throw the keys and run to cover, away from your own vehicle that has your family members. If in close enough proximity you may consider a disarm attempt.

There are no easy answers to this sort of criminal activity, so it demands some thought and consideration beforehand. While there is always the possible need to resort to lethal force, the best way to avoid a carjacking is to exercise proactive awareness when on the road and in transient locations around vehicles.

Watch out for mobile carjack gangs that arrive by car and debuss quickly to overwhelm you. One of them drives off in your car, while the first car collects the remainder of the gang and flees.