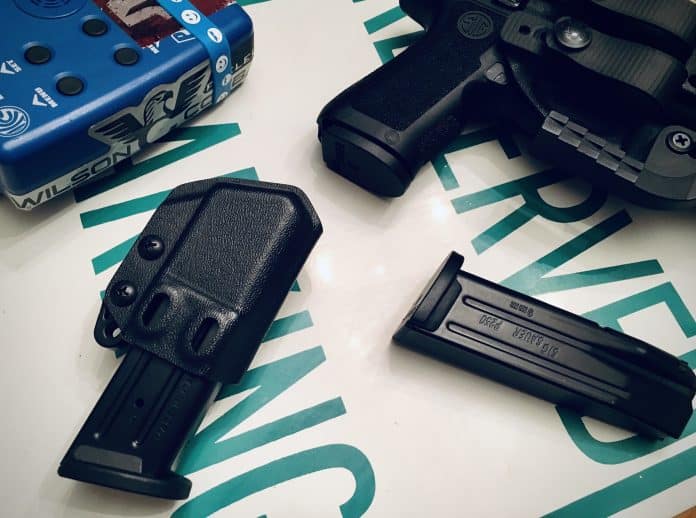 Emergency reloads are exceedingly rare in self-defense shootings. Especially in a time when guns like the P365 exist, and small guns carrying significant onboard ammunition are the norm. Sometimes, we see them in law enforcement shootings, but even that is relatively uncommon. So why bother? Well, we have to do them when we go shoot guns for fun. We also don’t want to end up on the wrong side of a statistic. So while I wouldn’t spend huge amounts of time on working reloads, making some effort to at least be proficient is probably a good idea. These are five things I have found to help with a fundamentally sound reload.

Use index points. Consistency is key to doing something quickly and fumble-free. Index points give us that consistency. Personally, my index points are the muzzle on the eye-target line and the inside of my bicep against the side of my torso. This helps to consistently place the handgun in space. The gun being in about the same place all the time makes it a lot easier to get the magazine to the right place too.

Speaking of sticking magazines (coughglockcough), keeping the gun oriented the correct direction while depressing the magazine release will make a huge difference. The tendency is to rotate the gun towards the direction the new magazine is coming from before the empty magazine is out. This can sometimes cause problems, especially with plastic magazines that sometimes don’t drop free quite as well, or with magazines that have already been dropped in the mud and dirt a few times that day and are dirty. Keep the slide parallel to the ground, and magwell pointed toward the earth, and gravity will be your friend. Once the magazine is free of the gun, then we can rotate the mag well towards our fresh ammo source.

Unquestionably, using the slide release is the quickest way to get the gun back into battery and slinging lead again. How much faster, in my experience, about 1/2 of a second than an overhand rack. On a 3 second reload, that is about a 16% time improvement. I know some people prefer not to use the slide release, and the usual argument for that is pretty bogus, but some guns definitely have better designed slide releases than others. Do as you see fit. Just understand using the slide release is faster, and know you are giving up about a half-second.

This one is a bit controversial in some circles. I am a fan of keeping the muzzle on the eye-target line during the reload. This keeps the gun higher in my vision, facilitates my ability to move my feet quickly while reloading if needed, and gets the gun back on target quickly when the reload is complete because the front sight never leaves my vision. This usually means the muzzle is slightly elevated, though. I know some ranges are a hard no on an elevated muzzle because of safety concerns. I also know some instructors I have a lot of respect for that are not fans of an elevated muzzle during a reload. Do what you think is best, keeping specific circumstances in mind that may necessitate deviation from the default practice.

There you have it, five tips for a better reload. The nice thing about all of this, we can practice all of it in dry practice with dummy rounds. It might be a handy thing to work while we are all in the “social distancing” mode because of the coronavirus. Let us know how it goes in the comments.