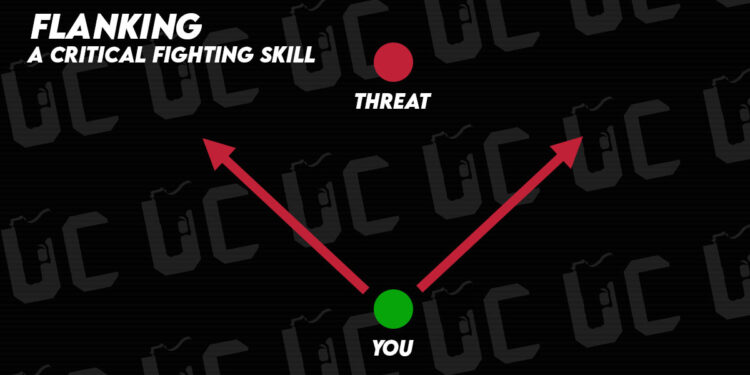 Whether in reference to fighting with open hands, fighting with guns, or any other type of human combat, a key tactic for victory is to flake the enemy. Getting to the side of your enemy is a go-to strategy for defeating him. In terms of gunfighting in a military capacity, there are entire procedures for doing this in combat, but that is not very relevant to the armed citizen. However, the tactic of flanking the lone, or possibly multiple, adversaries in a citizen self-defense scenario is contextually different but still of great importance.

The ideal of flanking an enemy is that the human fighting machine, whether the lone individual or a group, can focus all of their firepower towards their front, but only a fraction of it to one side or another, and almost none of it to the rear. In unarmed combat, getting to the “outside” of the adversary puts you in a dominant position, and taking an adversary’s back puts you in the best possible position as the human being is designed to face forward; the eyes look in one direction and the limbs operate to full effect in that same direction. Whether fighting with empty hands or with weapons, taking the enemy’s flank is a key strategy so that you can put all of your firepower on him, but he can do little to combat you.

Flanking proves exceedingly important in dealing with both lethal and less-lethal, “simple” assaults on the street and part of your self-defense training should be gearing yourself to immediately flank an adversary.

No matter what tools you have on your person, there is the chance that a fight can at least start at contact distance and empty-handed skills must be used. A tenant of combatives training is to get outside of the opponent’s limbs and take his flank, and ultimately get to his back. Since the human body functions at its full capability towards the front, that is the area you want to avoid as you are prone to taking the most damage face on. By taking the flank you are able to minimize his ability to hurt you while maximizing your own ability to inflict damage. Grappling techniques such as arm drags, shoulder drags, and shoulder spins all provide a means of flanking an opponent, and ultimately taking the opponent’s back. Therefore, even in the most basic form of human conflict, empty hand fighting, this principle applies.

Flanking When Dealing with Unknown Contacts

Flanking is a valuable tactic even before any violence occurs. As part of his Managing Unknown Contacts paradigm, well-known firearms, and self-defense instructor Craig Douglas teaches a tactic for being able to see what is behind you when dealing with the approach of an unknown and possibly dangerous person. This technique involves moving in a circular motion to one side or another of the threat; on the face of a clock, if the threat was the center pivot point of the hands and you were standing at six o’clock, you would move to three o’clock or nine o’clock in order to flank the threat you are observing so as to also see what may be approaching you from the rear. Therefore, flanking movement provides the ability to observe your environment, particularly your most vulnerable point behind you.

Flanking movement, in this regard, can enhance your safety simply due to the movement itself. Criminal assaults often involve multiple adversaries, so by moving when dealing with the single known adversary you make yourself a harder target for any unknowns yet unseen. Implementing such a circular movement, towards the flank of the contact or adversary you are dealing with, puts you in motion and decreases the ability of an unseen attacker to take your back. The flanking movement described above also has the benefit of being psychologically troubling for the criminal actor that you are dealing with. Having done this movement several times while dealing with aggressive street people who have approached I can tell you that they were shocked by what they were seeing and quickly broke off their attempt to get closer. A criminal that witnesses such a maneuver is often left wondering what they are dealing with.

A critically important skill to develop as a capable self-defender is the utilization of lateral movement when being charged by an attacker. In particular, force on force training conducted by many experts over many years has proven that diagonal movement towards the threat seems to work best in this regard. Again, on the face of the clock, if you are standing at the center of the clock face and the threat is at 12 o’clock, you would want to move diagonally towards 10 o’clock or 2 o’clock in reference to the threat. This movement actually makes you harder to track than if you were moving only lateral to the threat, and it also can set you up for taking the threat’s back as you can end up behind the threat.

Consider the possibility of deploying a less-lethal tool like OC spray against an aggressive, charging, opponent. The diagonal movement is going to make you much harder for the adversary to track and make contact. It will also result in you ending up behind the adversary. Another good example of this concept is if going to lethal force against a charging adversary with a knife; you cannot stay stationary if being charged with a contact distance weapon, and the diagonal movement if done aggressively, can result in your ability to continue shooting the adversary as he rushes by you. Even if this ideal scenario does not work, the diagonal movement will at least do a much better job of keeping you away from the contact distance weapon than if you were only standing still.

Finally, extensive force on force training, as well as real-world application, has demonstrated that flanking movement, particularly diagonal movement in reference to the threat, proves the most effective way of moving to deal with an adversary who has a firearm. Developing the skill of shooting on the move, while moving diagonally in reference to the target, is a winning tactic that should be practiced. Ideally, movement to cover is best, but aggressive movement towards the flank of the adversary is the best option if caught in the open.