by Gabby ArmedCandy
in Articles, CCW For Women, Gun Reviews
48 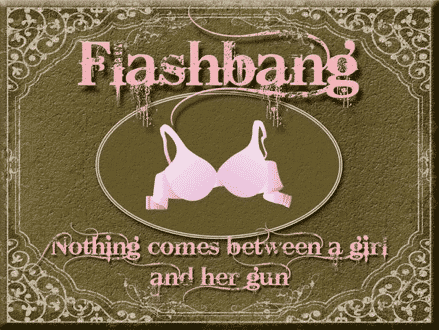 As some of you are aware, one of my goals with ArmedCandy is to bring to the market products for women that enhance the shooting and carrying experience. Some of these may be my own designs but many great products already exist. As I explore the currently available options, I share them with you, so that your hunt may be an easier one.

A note before you dive in: This review is of a product that is made for women. There should be very little need for male shooters to weigh in on this article. If you gentlemen do feel so compelled, please, keep it classy. Thank you -ArmedCandy

I walked into the range and my test group was already playing with the Flashbang Holster and a Ruger LCRevolver. I am immediately terrified as I watch, because the gun is repeatedly pointed at the tester’s left breast. Of course the gun is not loaded, but knowing that the goal of this exercise is to strap a loaded weapon to her chest, that, if positioned correctly, will be pointed at her heart, all day, everyday, makes me question the definition of “success” in this operation. True, the likely-hood of the gun firing, while strapped in place, is minimal, I still find this holster’s configuration concerning. I base this thought mostly on the fact that generally, people shoot themselves when drawing or re-holstering their weapon. (This data was confirmed by multiple shooting instructors.)

The Flashbang Holster is a concept my testers and I love. We are big fans of taking advantage of the female form in order to hide a weapon. In theory, cleavage carry seams like a viable option and the manufacturer’s videos make the holster seem simple and affective.

Then we attempted to install the Flashbang and our confidence went out the window. We just couldn’t get it to sit correctly. The plastic clam-shell came with three different strap lengths for securing the plastic clam-shell to the center band of one’s bra. None of these seemed to be the right length to hold the clam shell where we assumed it was supposed to go. The clam-shell is specific to each gun model and is available for a number of weapons, but in most of the videos, we noticed that the women were demonstrating the holster with the smallest of gun options. Conversely, we were testing with a revolver that is not part of the “smallest gun” category. Still, the holster was offered for this gun model so we pressed on.

I believe our issues began at the packaging. The holster came in a simple plastic zipper bag with a sticker depicting the brands image. Instructions were included explaining how to change the leather straps, but no where was there an explanation of how to wear the holster. We turned to YouTube and found a number of videos but none gave us clear directions. Here is the one upon which we relied:

The group of women I gathered to test the holster represented a range of bra cup sizes and body types and yet, none of us could make the holster sit properly. The busty girls felt that it made them appear asymmetrical, if they could manage to secure the holster at all. The petite woman, who was the only one who got the holster close to working, still had a small central lump appear under her shirt and also complained of breast pain the following day.

After a significant amount of time fumbling and poking ourselves, we came to one main conclusion. The smaller the gun, the easier it is to conceal… Wait, we knew that going into this! I could put a Ruger LCP (seen at left) in my pocket and people would just assume it was a cell phone. But frankly, I don’t want to shoot an LCP. I want to carry a gun with which I feel confident. As s**t hits the fan, I’ll be reaching for a weapon with which I often practice, and that doesn’t cause my palms to sting from the recoil. So, I guess I won’t be drawing my gun from a Flashbang Bra Holster. *Sigh* The search continues.

I have heard from women who swear by the Flashbang Holster. I’m glad they have found something that works for them. My test group and I are still hunting for a solution. In the meantime we deal with the difficult balance of weapon preference, comfort and fashion.