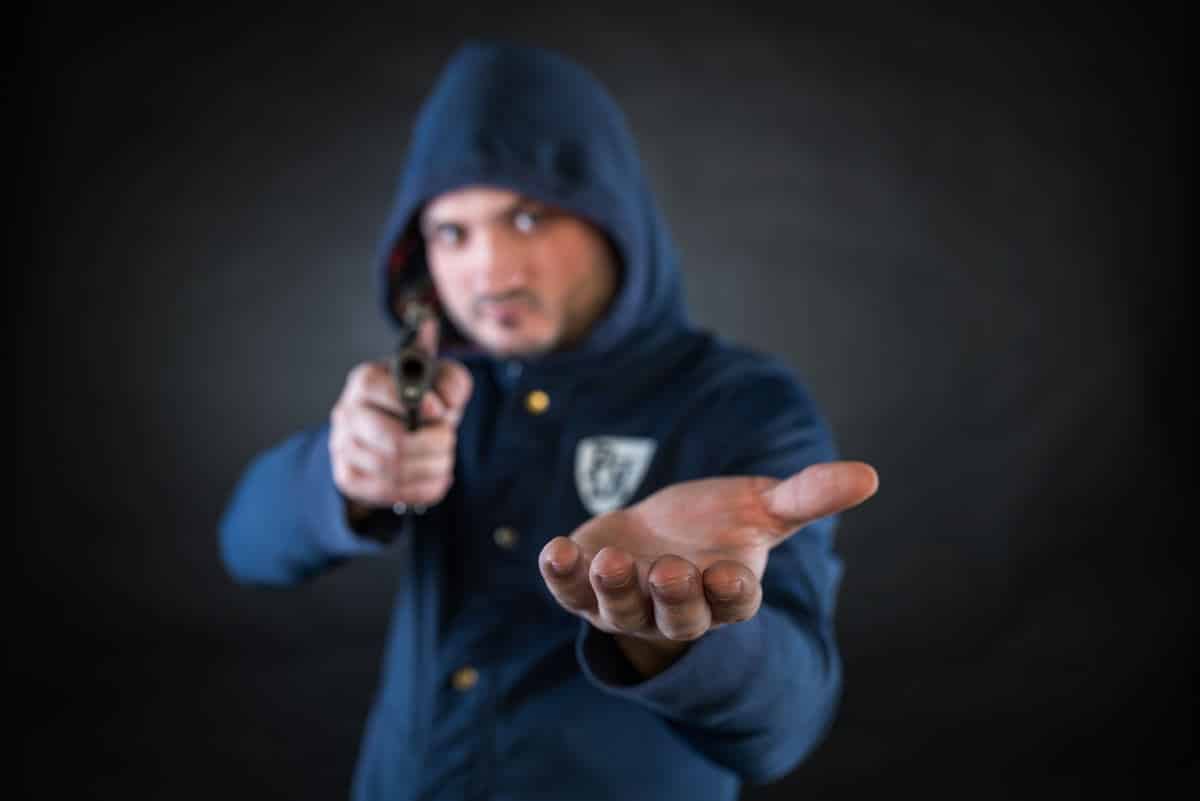 In a mugging situation, your attacker is likely to use deception to get close enough to you to attempt to rob you.

Deception. Manipulation. Deceit. Trickery. These are just some of the tools that you’ll be faced against.

Never expect a fair fight but the next best step is count on using your own methods of deception to lull your attacker into a false sense of security. After all, he doesn’t care a whit about whether or not you leave breathing on your own accord — why should you do him any favors?

Early on in a potential encounter, you have to broker whether distance or deception will be ideal. Distance gives you room to maneuver, potentially escape, or use range as a weapon itself if you’re carrying a concealed firearm. Where speed is an unknown variable, you have to decide early on whether you plan on turning this attacker’s methods against him or warning him to stay his distance.

Two simple words hold a lot of meaning when encountering someone for the first time. If you were approaching someone on the street and he issued this simple command, you would likely stop and at least assess the situation. Upon that next step towards that person, however, you’re sending a clear message: I hear you and I will not comply.

Switching frames for a moment, if you tell someone you don’t know to stay back and he doesn’t comply, he’s forced to transition from a passive threat — one that believes he is evading detection — to a known active threat.

Don’t be afraid to call it like you see it.

If you don’t get the warm and fuzzies about someone approaching you, don’t be afraid to call it out. This is your life. Potential disagreements and confusion can be remedied at a distance, not face-to-face where your ability to draw and aim is hindered severely.

When faced with multiple enemies, they will likely depend on closing distance as fast as possible without creating a scene. If they’re not concerned with who’s watching, they’ll close even faster. Pick one and neutralize him first.

Your ability to outmaneuver multiple attackers is far less than outmaneuvering one. Where you detect one or more potential assailants, make sure to address the closest one approaching. Be prepared to find out there’s others.

There is nothing wrong with deciding that someone is perceived as a threat and taking a defensive posture. The biggest mistake is usually in failing to do so and then being left with no good options.

At the first sign you think there’s the potential for a bad situation to arise, find a good space that provides ample movement to cover. You don’t need to fight toe-to-toe with an attacker. You are allowed to decide this person presents himself as a threat and place objects inbetween you and him that would block his approach and give you the advantage.

Let your terrain, environment, and conditions clue you in to how you can adapt that defensive strategy best. Your considerations should always prioritize movement away from the threat whenever possible. When that is not feasible, the next choice is finding the best ground that gives you the most opportunity to choose how you want to handle this occasion.

A big fault in a lot of people’s strategy is giving too much ground to a potential attacker before finally deciding a fight for survival exists. It’s a hard decision but when you feel your life is threatened, you need to take the initiative away from the attacker. The best possible scenario is your potential attacker sees you preparing for his approach and decides you’re not worth the hassle. The worst: you’re prepared to handle him with minimal exposure to your own well-being.

I basically profit about $6.000-$8.000 monthly for freelancing at home. Those who are willing to do easy computer-based jobs for 2h-5h every day at your house and earn valuable paycheck in the same time… Then this work opportunity is for you… UR1.CA/p7vxa

Naww Tim, Cam Whores can make a lot of money….LOL

I get paid close to six to eight thousand bucks /a month from freelancing online. Everyone willing to work basic computer-based work for 2-5 hours /a day at your home and earn decent profit in the same time… Then this gig is for you… UR1.CA/pg5kh

I currently earn in the range of 6000-8000 dollars /a month doing an online job. For everybody looking to work easy freelance jobs for few hrs every day from your house and earn valuable paycheck in the same time… Try this gig SELF98.COM