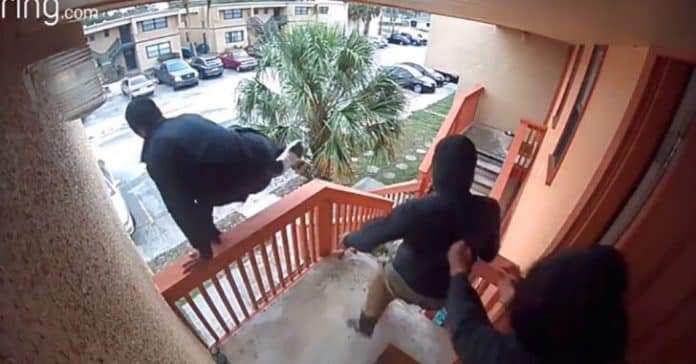 Three armed men wearing black hoodies walked up to a man’s front door a little before 6 P.M on April 14, 2020. One of them throws himself against the door once, twice and the third time he breaks in the door. All three run inside and then moments later you hear at least five gunshots and all three intruders are seen fleeing from the home. One was shot in the chest and has been identified at a nearby hospital. The other two remain at large.

The incident was recorded by a Ring camera outside the front door and in total only lasted 29 seconds.

We are still looking for the 2nd & 3rd suspects. Remain anonymous and potentially get a cash reward for information leading to their arrests from @FCCrimeStop @ 1-866-845-TIPS.

Video may be disturbing to some. pic.twitter.com/69BPBub8qA

It’s a bit shocking to see how quickly and frankly how easily it was to break this door open. The front door is usually the home’s first line of defense and it should take way more than just three shoulder bumps to break through it. Lesson? Harden your front door with at least a solid deadbolt so you’ll have as much time as possible to respond.

The Ring video clearly shows the break-in of three men which provides sure evidence of the attack.  It also recorded the sound of the gunshots which happen only seconds after all three intruders are inside. The homeowner either saw this coming, possibly through the Ring live feed, or at least had his gun very nearby which was a very good thing because it’s doubtful he would have had time to run to retrieve it.

Lesson 2? Home invasions can happen very quickly. How fast can you get to your home defense gun?