Follow Through on All Repetitions: A Skill to Develop in Training 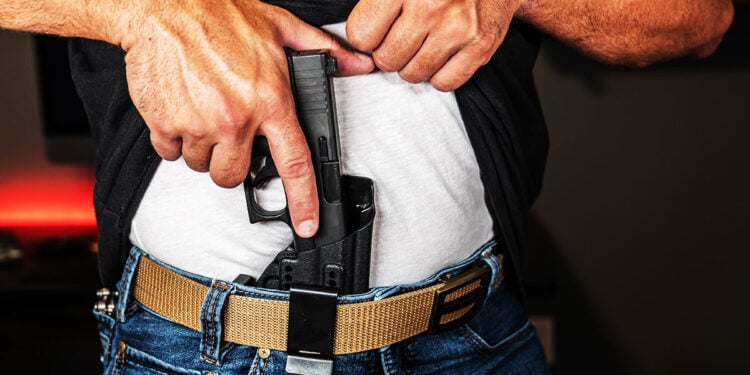 Most of us are guilty of the following: We draw our gun in dry practice or at the range, we foul the draw and perhaps don’t get a good grip, so we re-set and start over. This same principle applies to any other number of shooting tasks. This is a potentially detrimental practice. When we train, we must develop follow-through in our actions. The follow-through I refer to here is not “follow through” as it applies to shooting, in which we follow up every shot with the preparation of the next sight picture to make the next shot. Rather, I am referring to the practice of conditioning ourselves to follow through with every repetition, even a bad one, so that we condition ourselves to do so if things go bad.

Consider the specific tasks that you practice that apply to self-defense; the draw stroke of your pistol is probably the easiest to visualize in this regard, but there are certainly other examples. It is very easy to get in the habit of aborting the task if we get off to a bad start. Drawing your pistol from concealment, perhaps drawing a blade or other weaponry from concealment, or throwing a specific blow or strike, are all examples of movements that would be executed with explosive speed during a real-life defensive encounter. Yet, in training, we have the option to abort the repetition.

You must seek out good training so that you learn proper techniques from the beginning. Then you must follow this with regular practice in the use of your defensive tools and in your defensive skills to be proficient. What you do in training will certainly be made manifest during a crisis, and you will act the way you have trained to act. Due to this natural human tendency, we need to analyze exactly what we condition ourselves to do in our training and practice. Doing something that could be detrimental, and doing it regularly in training, can lead to consequences in the real world at the worst possible time. Thus, it is important to not only do many repetitions in training but to do correct repetitions.

Here are the detrimental habits that I see consistently among shooters, and I have found myself falling into the trap of practicing these habits as well:

This is probably the most obvious example of a detrimental training practice; simply aborting a poor draw rather than recovering from it and seeing it through. Aborting a poor draw stroke is an understandable tendency; why would we want to finish a bad repetition? The issue, however, is that abandoning such a crucial task in training may condition us to stop mid-task during a violent encounter. It should be obvious how mimicking this training artificiality during a real violent encounter can be detrimental. Imagine being in a desperate situation where innocent people’s lives depend on your ability to draw the gun quickly and take action, yet you stop the task and re-set after fouling the draw. This is a bad habit to build in practice.

Putting the Gun Away Immediately

Another trap that shooters often fall into, and I struggle with this myself, is putting the gun back in the holster as soon as the shooting task is finished. This is a very easy habit to develop, especially if you are a serious shooter who practices a lot and does competition. The reality is, for serious shooters, self-defense may be a primary motivator, but shooting for the sake of being good at the mechanics of shooting is a thing unto itself. Therefore, when doing repetition after repetition of a particular shooting drill, it is easy to abandon the mindset of keeping the gun in hand until the “threat” is truly over. While such a habit may be fairly inevitable, we should consciously strive to practice in a way that is relevant to self-defense if that is the motivating reason for us to train and practice in the first place. Getting into the habit of keeping the gun in a ready position, in hand, to assess the situation following the shooting task is a good practice.

One of the most dangerous habits that can be engrained in practice is carelessly and haphazardly re-holstering the gun. To safely re-holster, the shooter should come to a hard “mental break” (as taught and explained by the late Todd Green) in which the shooter consciously acknowledges that the shooting is done and then verifies that the finger is out of the trigger guard, and the gun is guided safely back to the holster. The problem here is that this operation takes a little more time than jamming the gun back into the holster. Most shooters will re-holster without much thought in dry practice. As you would imagine, this builds a bad habit. Carelessly re-holstering in practice can lead to carelessly re-holstering the live gun in the real world. Add to an already careless approach the adrenaline dump and shaking hands associated with the real-world stress of a violent encounter and the risk of shooting one’s self when re-holstering is serious.

In closing, I urge you to analyze your own practice habits and identify where you may be ingraining detrimental habits. Once you identify the problems, work to correct them in your dry practice and range practice to equip yourself with the best possible skillset for that rainy day you hope never comes.